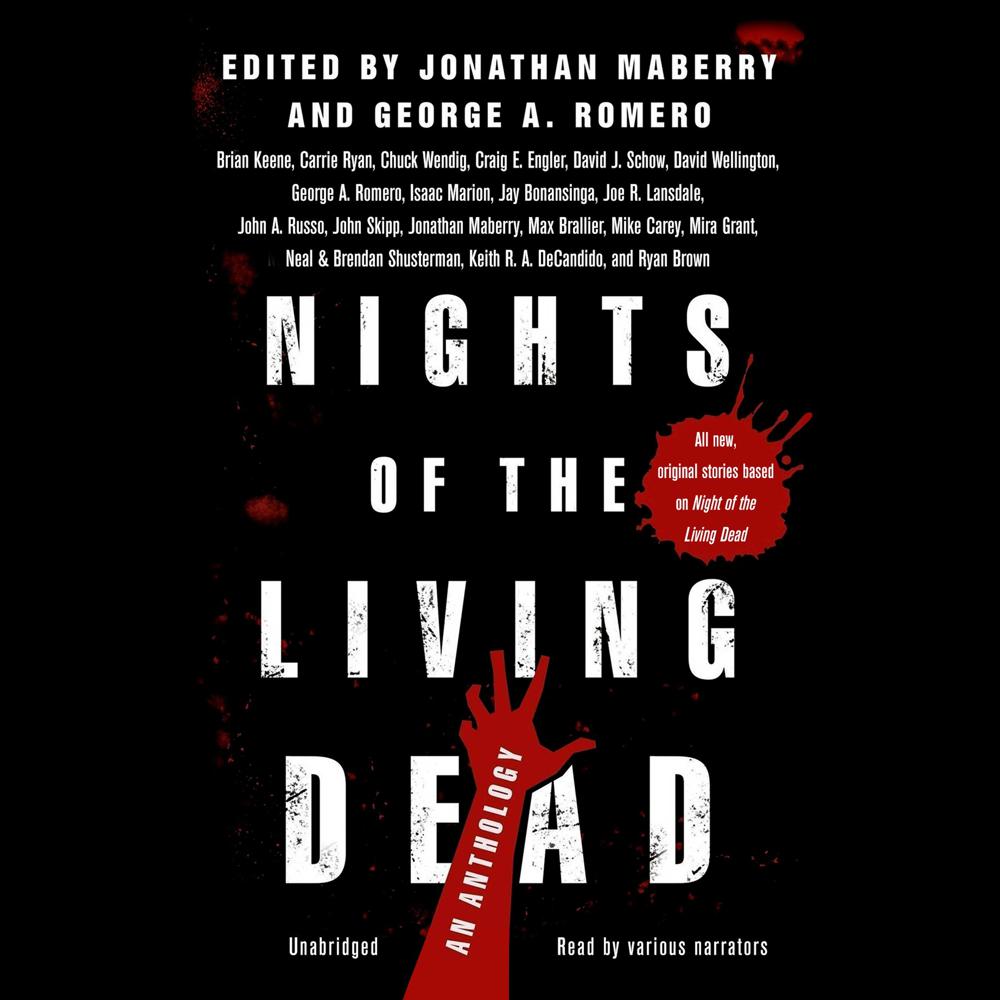 In 1968, the world experienced a brand-new kind of terror with the debut of George A. Romero’s landmark movie Night of the Living Dead. The newly dead rose to attack the living. Not as vampires or werewolves. This was something new—and terrifying. Since then, zombies have invaded every aspect of popular culture.

But it all started on that dreadful night in a remote farmhouse. Nights of the Living Dead returns to that night, to the outbreak, to where it all began. New York Times bestselling author Jonathan Maberry teams with the godfather of the living dead himself, George A. Romero, to present a collection of all-new tales set during the forty-eight hours of that legendary outbreak.

For anyone who loves scary stories, take a bite out of this!

“Stories are narrated by different readers, who are all excellent tonal matches for the individual work they read. The narrators demonstrate an emotional connection to their characters and express themselves through distinct voices and vocal deliveries.”

“The full cast of narrators captures the dread and shock listeners might well expect, but they aren’t afraid to explore the humor, heart, and humanity present in each story as well, making for a collection that is both chilling and oddly charming.”

“This stellar collection…showcases the breadth of zombie literature, from the disturbing and the gross-out to the touching, thought-provoking, and even funny. This is a collection by masters at the top of their games, but it is also a tribute by fans to the man who inspired them to become writers.”

“Zombie fiction fans can’t get enough of their favorite monsters, but this masterly collection of tales from some of today’s greatest speculative writers will sate their appetite—for a while.”

“Twenty authors return to the world first seen in Romero’s 1968 film, Night of the Living Dead, to explore the original zombie apocalypse in all its gory glory…The stories show zombies invading myriad settings—even outer space—and decades, from the 1960s to the present…The anthology is the perfect homage to the zombie movie that started it all.”

“The zombie phenomena originally scratched its way out of the grave in George Romero’s Night of the Living Dead, and now Romero is surrounded by his [progeny] Jonathan Maberry and many other talented-but-horrific folk to give the living dead another night in which to scare the bejeezus out of all of us.”