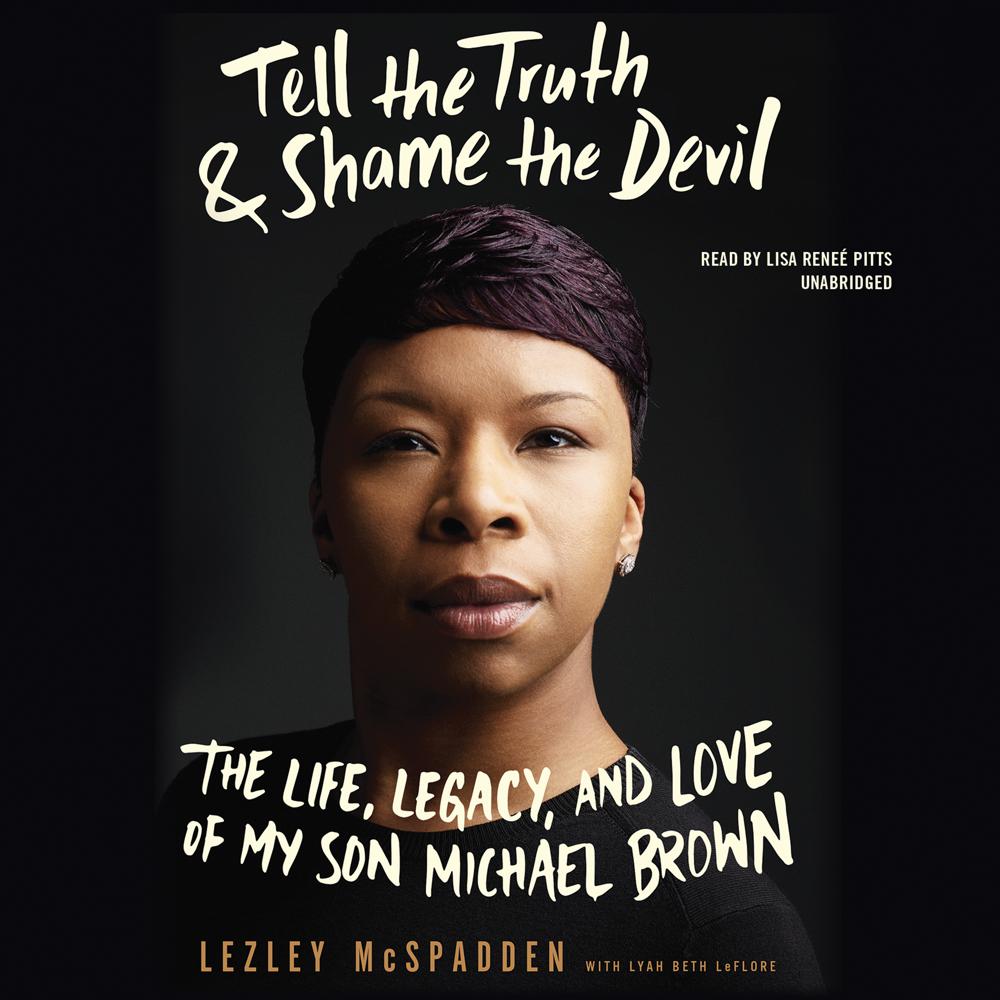 This revelatory memoir by the mother of Michael Brown, the African American teenager killed by the police officer Darren Wilson in Ferguson, Missouri, in 2014, sheds light on one of the landmark events in recent history.

“I wasn’t there when Mike Mike was shot. I didn’t see him fall or take his last breath, but as his mother, I do know one thing better than anyone, and that’s how to tell my son’s story and the journey we shared together as mother and son,” says Lezley McSpadden

When Michael Orlandus Darrion Brown was born, he was adored and doted on by his aunts, uncles, grandparents, his father, and most of all by his sixteen-year-old mother, who nicknamed him Mike Mike. McSpadden never imagined that her son’s name would inspire the resounding chants of protesters in Ferguson, Missouri, and ignite the global conversation about the disparities in the American policing system. In Tell the Truth & Shame the Devil, McSpadden picks up the pieces of the tragedy that shook her life and the country to their core and reveals the unforgettable story of her life, her son, and their truth.

Tell the Truth & Shame the Devil is a riveting family memoir about the journey of a young woman triumphing over insurmountable obstacles and learning to become a good mother. With brutal honesty, McSpadden brings us inside her experiences being raised by a hardworking, single mother; her pregnancy at age fifteen and the painful subsequent decision to drop out of school to support her son; how she survived domestic abuse; and her unwavering commitment to raising four strong and healthy children, even if it meant doing so on her own.

McSpadden writes passionately about the hours, days, and months after her son was shot to death by Officer Darren Wilson, recounting her time on the ground with peaceful protestors, how she was treated by police and city officials, and how she felt in the gut-wrenching moment when the grand jury announced that it would not indict the man who had killed her son.

After the system failed to deliver justice for Michael Brown, McSpadden and thousands of others across America took it upon themselves to carry on his legacy in the fight against injustice and racism. Tell the Truth & Shame the Devil is a portrait of our time, an urgent call to action, and a moving testament to the undying bond between mothers and sons.

“This production robs one’s breath while bestowing enlightenment…Narrator Lisa Renee Pitts delivers a performance so believable and emotionally authentic that it reaches inside listeners and shakes their very souls. From the quiver in her voice, indicating a desperate attempt to hold back tears, to the genuine laughter erupting out of a heart overflowing with joy, Pitts forces listeners to experience the life-altering emotions of her subject…This narration epitomizes the power of audiobooks. Winner of the AudioFile Earphones Award.”

“Honest, revealing…crucial to understanding the full context of Michael’s death and the chaos that followed.”

“McSpadden sets out to make clear that while her son may have been ‘no angel,’ he was human. He was a person with goals. He was kind, gentle, a caring friend…with all of the contradictory and complex characteristics implied by the term [human]…In these pages, he exists, whole and loved.”

“Shatters preconceived notions of who you think he was. It is his mother’s story as much as it is his. Because to truly see the child, one must first understand the one who gave him life.”

“McSpadden reveals her life conversationally, including the colloquial phrasings that pepper her speech…A vivid, compelling account of a life on the edge.”

“Lezley McSpadden is putting her light out there for the world to see.”

“This book gives voice to [McSpadden’s] journey and allows us all to see what one mother can do to find answers.”