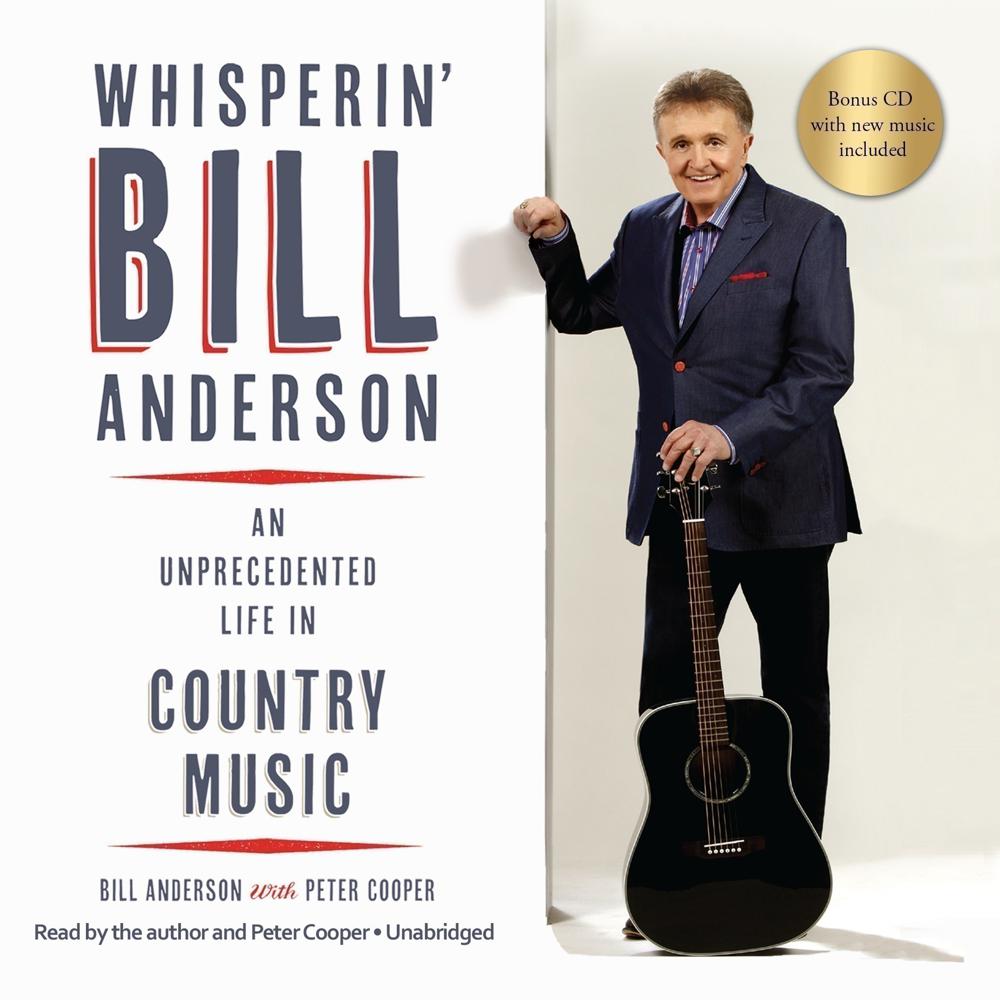 Whisperin’ Bill: An Unprecedented Life in Country Music presents a revealing portrait of Bill Anderson, one of the most prolific songwriters in the history of country music. Mega country music hits like “City Lights,” (Ray Price), “Tips of My Fingers,” (Roy Clark, Eddy Arnold, Steve Wariner), “Once a Day,” (Connie Smith), “Saginaw, Michigan,” (Lefty Frizzell), and many more flowed from his pen, making him one of the most decorated songwriters in music history.

But the iconic singer, songwriter, performer, and television host came to a point in his career when he questioned if what he had to say mattered anymore. Music Row had changed, a new generation of artists and songwriters had transformed the genre, and the Country Music Hall of Fame member and fifty-year Grand Ole Opry star was no longer relevant. By 1990, he wasn’t writing anymore. Bad investments left him teetering at bankruptcy’s edge. His marriage was falling apart. And in Nashville, a music town where youth often carries the day, he was a museum piece―only seen as a nostalgia act, waving from the stage of the Grand Ole Opry.

Anderson was only in his fifties when he assumed he had climbed all the mountains he was intended to scale. But in those moments plagued with self-doubt, little did he know that his most rewarding climb lie ahead. A follow-up to his 1989 autobiography, this honest and revealing book tells the story of a man with an unprecedented gift, holding on to it in order to share it.

Known as “Whisperin’ Bill” to generations of fans for his soft vocalizations and spoken lyrics, Anderson is the only songwriter in country music history to have a song on the charts in each of the past seven consecutive decades. He has celebrated chart-topping success as a recording artist with eighty charting singles and thirty-seven top-ten country hits, including “Still,” “8 x 10”, “I Love You Drops,” and “Mama Sang a Song.” A six-time winner of the Song of the Year Award and recipient of the BMI Icon Award, Anderson has taken home many CMA and ACM Award trophies and garnered multiple Grammy Award nominations.

His knack for the spoken word has also made him a successful television host, having starred on The Bill Anderson Show, Opry Backstage, Country’s Family Reunion, and others. Moreover, his multifaceted success extends far beyond the country format with artists like James Brown, Aretha Franklin, Dean Martin, and Elvis Costello recording his songs.

Today, thanks to the support of musical peers and a few famous friends who believed in him, Anderson continues to forge the path of lyrical integrity in music, harnessing his ability to craft a song that tells a familiar story, grabs you by the heart, and moves you. Modern-day examples include “Whiskey Lullaby” (Brad Paisley and Allison Krauss), “Give It Away” (George Strait), “A Lot of Things Different” (Kenny Chesney), and “Which Bridge to Cross” (Vince Gill).

A product of a long-gone Nashville, Anderson worked to reinvent himself, and this biography documents Anderson’s fifty-plus-year career―a career he once thought unattainable. With anecdotes of Anderson interacting with the superstars of American music, including such legends as Patsy Cline, Vince Gill, and Steve Wariner, this book highlights Anderson’s trajectory in the business and his influence on the past, present, and future of this dynamic genre.

“Bill Anderson[’s]…words and melodies are part of the very foundation upon which country music is built. What an amazing life and career. I’m so glad he chose…to write down his story for all of us fans and friends.”

“Bill Anderson has been an inspiration to me as a writer since I was young and new in Nashville. It was songs like ‘Still’ and ‘Once a Day’ that made me want to become a better writer. Bill has written so many wonderful songs and is a major force in country music, not only as a writer but as an entertainer, a singer, and a host.”

“A great read for country fans and non-country fans alike: the unlikely tale of a true innovator who succeeded against all odds…and then did it again.”

“A funny book, a story told without excess ego or exaggeration…Despite great success, he’s kept his humility and remains accessible to fans…This book won’t be in the inspirational section of your local book store, but it probably should be. The main message is to follow your passion, never give up and be nice to people.”

“A genial account of a gentleman musician’s life in and around Nashville…Plenty of anecdotes about the rigors of touring and the process of writing hit songs. Anderson is a uniquely country personality, and that personality shines through.”

“To this day when I hear one of my favorite songs, Bill undoubtedly wrote it. When I asked him to write some songs with me in the early 1990s, I was shocked to hear him say he didn’t write much anymore because he didn’t think my generation was interested in what he had to say. I told him I believed he was one of the most prolific and important songwriters in our history, and it would mean the world to me if we could try to write something together. ‘Which Bridge to Cross (Which Bridge to Burn)' was the result of that collaboration, and in Bill’s words, it lit a fire to want to keep writing with some of us kids. Well, believe me, we kids are better songwriters because of Bill Anderson.”