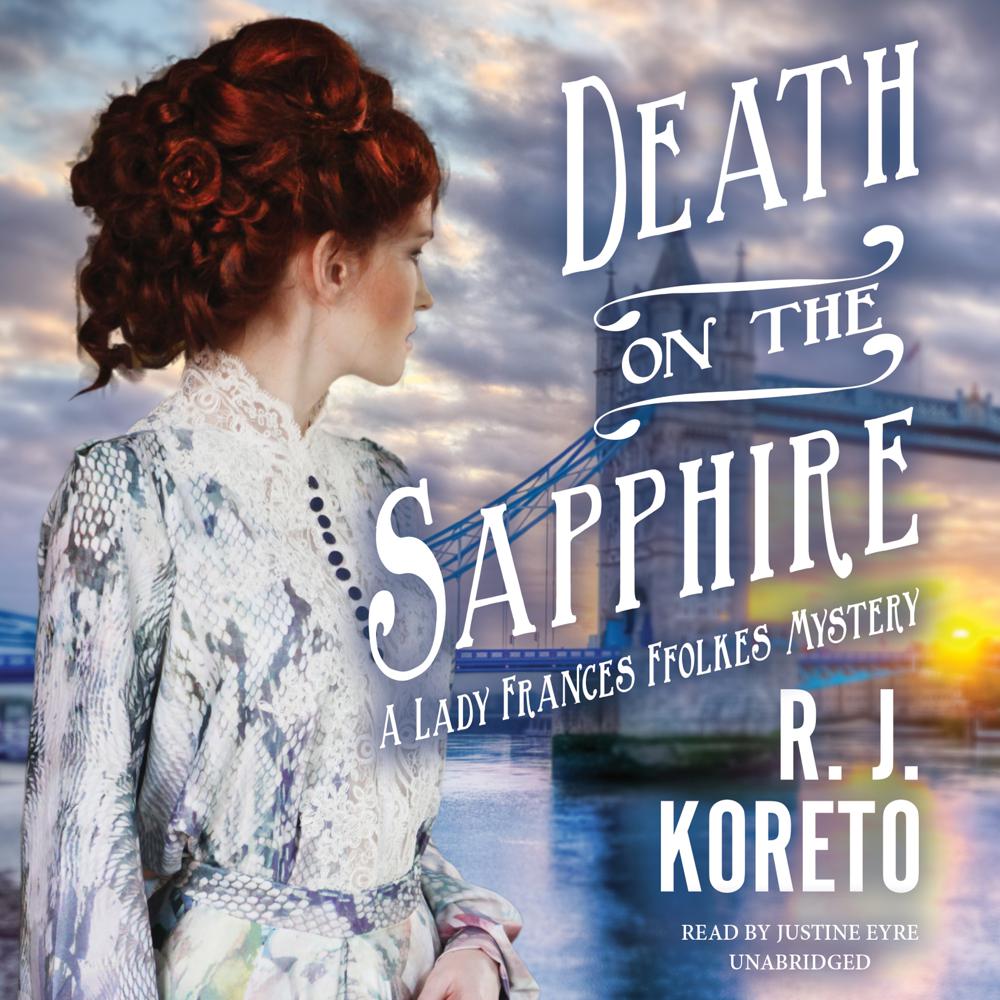 An extraordinary woman living in extraordinary times, Lady Frances Ffolkes is an Edwardian-era suffragette who has an uncanny ability to attract danger and romance.

When Major Colcombe, a family friend and war veteran, dies under mysterious circumstances, the good Lady discovers that he was working on a manuscript about South Africa’s bloody Boer War, which reportedly revealed a scandalous mistake that cost many innocent lives. Now, it’s up to Frances and her loyal lady’s maid, June Mallow, to track down the missing manuscript and bring the killer to justice. Despite kerfuffles with Scotland Yard and the British secret service, Frances never backs down and finds herself in several very unfortunate positions—and one very fortunate love triangle.

Death on the Sapphire is R. J. Koreto’s witty and winsome debut of a series that is sure to be a fan favorite for years to come.

“Cultured tones and clipped British accents are just two of charming vocal characteristics narrator Justine Eyre adopts while performing this story of murder and conspiracy…Eyre fluidly delivers the conversations of the upper and lower classes…drawing the listener more deeply into London society and a chilling conspiracy.”

“The novel expertly mixes politics, war, theft, murder, and social class distinctions…Narrator Justine Eyre gives the novel a full-voiced reading. She is especially noted for her facility with accents. Here she gets to do both upper class and working class British, and Scots, as well as Australian and Wheaton’s Irish maid. At an Indian restaurant, Frances is greeted in Hindi. Eyre’s male characters are convincing, with both a warm baritone and some grumpy drunks. The series is highly recommended.”

“Fans of both Downton Abbey and Agatha Christie will embrace the subtly witty, refreshingly unconventional heroine in Koreto’s debut series…The Edwardian setting [is] rich with history and politics.”

“Lady Frances is a charming heroine…The authentic setting and enjoyable characters are sure to appeal to lovers of mystery and historical fiction alike.”

“Suffragette Lady Frances Ffolkes takes readers on a spirited journey to locate a stolen manuscript and solve the murder of a family friend. Witty, tenacious, and thoroughly engaging.”

“Spirited and tenacious, Lady Frances Ffolkes is a force to be reckoned with…[A] charming Edwardian-era mystery. With Death on the Sapphire, R. J. Koreto has given us a winning heroine and a thoroughly delightful read.”