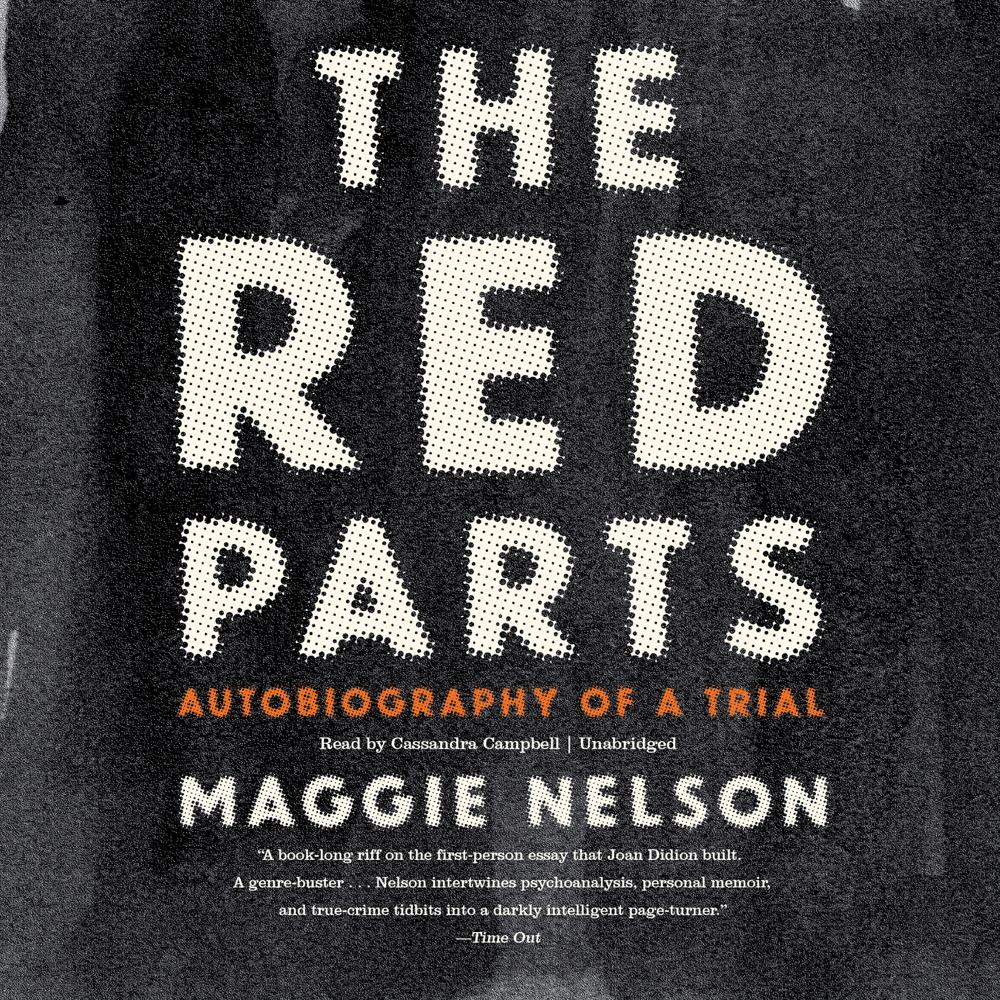 A chilling genre-busting memoir by a major American essayist

Late in 2004, Maggie Nelson was looking forward to the publication of her book Jane: A Murder, a narrative in verse about the life and death of her aunt, who had been murdered thirty-five years before. The case remained unsolved, but Jane was assumed to have been the victim of an infamous serial killer in Michigan in 1969.

Then, one November afternoon, Nelson received a call from her mother, who announced that the case had been reopened; a new suspect would be arrested and tried on the basis of a DNA match. Over the months that followed, Nelson found herself attending the trial with her mother and reflecting anew on the aura of dread and fear that hung over her family and childhood—an aura that derived not only from the terrible facts of her aunt’s murder but also from her own complicated journey through sisterhood, daughterhood, and girlhood.

The Red Parts is a memoir, an account of a trial, and a provocative essay that interrogates the American obsession with violence and missing white women, and that scrupulously explores the nature of grief, justice, and empathy.

“A harrowing but clear-eyed examination of crime’s emotional fallout.”

“Nelson’s resistance to the easy answer, her willingness to reach a kind of conclusion and then to break it, to probe further and further, to ask about her own complex and not entirely noble intentions instead of facilely condemning others, make The Red Parts an uneasy masterpiece.”

“Rarely does a book come along that combines such extraordinary lyricism and ethical precision with the sense that the author is writing for her very life.”

“A book-long riff on the first-person essay that Joan Didion built. A genre-buster…Nelson intertwines psychoanalysis, personal memoir, and true-crime tidbits into a darkly intelligent page-turner.”

“Nelson’s book is more a reflection on our personal and cultural myth making surrounding murders than an exploration into this particular killer and what he did. This take is refreshing, and combined with Nelson’s intense, visual, and sometimes darkly funny prose, it makes The Red Parts an unforgettable book.”

“Blending a poet’s passion and a journalist’s cool eye, Nelson has produced a distinctive story of an otherwise ordinary family’s encounter with unspeakable violence.”

“Free from the bounds of genre, but not untethered as in floating—not wispy or in flight. As a text, The Red Parts bears weight, though it moves nimbly; it is expansive, shifting, and sprawling, eddying into small moments of memory and time before flooding outward, straining against the limits of the writer and the writer’s mind.”