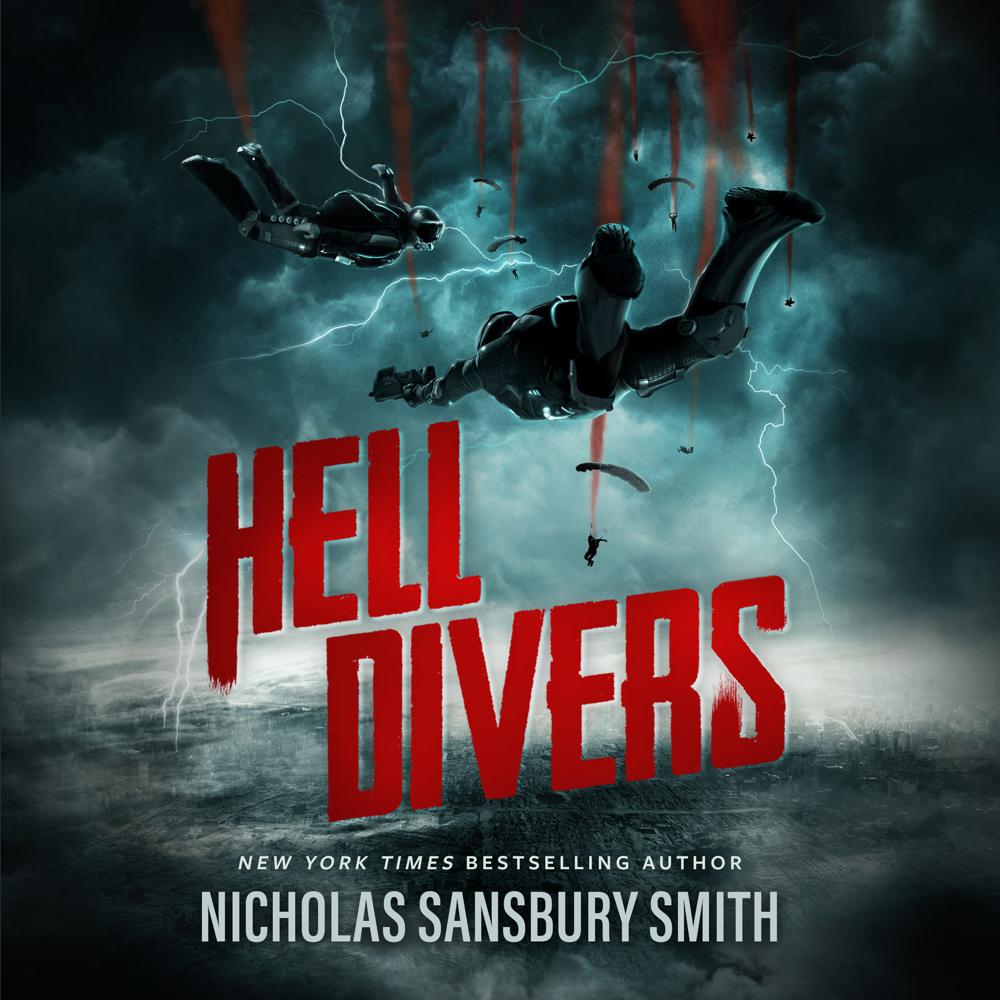 They dive so humanity survives …

More than two centuries after World War III poisoned the planet, the final bastion of humanity lives on massive airships circling the globe in search of a habitable area to call home. Aging and outdated, most of the ships plummeted back to earth long ago. The only thing keeping the two surviving lifeboats in the sky are Hell Divers—men and women who risk their lives by skydiving to the surface to scavenge for parts the ships desperately need.

When one of the remaining airships is damaged in an electrical storm, a Hell Diver team is deployed to a hostile zone called Hades. But there’s something down there far worse than the mutated creatures discovered on dives in the past—something that threatens the fragile future of humanity.

“The action writing is very good. It’s always clear what’s going on, even though the weapons, the enemies, and the settings are all unfamiliar…[and] Smith manages to keep it fresh and alive…R. C. Bray’s narration…is the kind of low-key performance that suits intense action perfectly…Bray hits exactly the right tone for a gripping adventure story.”

“What a great read! I received Hell Divers right before tropical storm Isais hit Long Island. I had just started the book when our power went out, leaving me in the dusk. I had only the flashlight in my phone, which was almost out of power. To give you an idea of how impossible this book is to put down, I went to my car, turned on the ignition, and sat in my idling auto reading while my phone charged. After that, I went back upstairs and revisited my days as a kid, reading books with a flashlight in bed when I should have been sleeping. I had to find out what happened in this thrilling story. Buy this book. Read it. Enjoy!”

“What a great read! I couldn’t stop reading. I had to find out what happened in this thrilling story. Buy this book. Read it. Enjoy!”

“Relentless action and danger in a gritty postapocalyptic world where survival depends on a few brave men and women. Hell Divers is one hell of a page-turner!”

“An action-packed page-turner. All humanity’s hope for survival rests on the shoulders of a handful of daring men and women. The odds are stacked against them, but they have no choice but to try. You won’t be able to put this book down until the last searing page. And then you’ll want the next book.”

“Hell Divers is action-packed, gritty, and wholly original. A rare combination of a high premise, solid storytelling, and heart.”

“An exciting new take on the end of the world and a thrilling race to survive…Sure to delight fans of survival and postapocalyptic thrillers.”

“Literally skydiving into the apocalypse, Hell Divers delivers more of Smith’s trademark breakneck action and suspense. Amazing settings, great characters, the end of the world shouldn’t be this much fun!”

“I love it! The whole book was awesome and I have a huge book hangover right now!…It was creative and intense and there was never a dull moment. I got so wrapped up in the story I felt like I was immersed in this whole other world for a little while…If you like post-apocalyptic stories, you should definitely give this one a try!”

“Hell Divers is an engaging story that holds one’s attention from start to finish and will certainly satisfy the readers’ need for adventure in a postapocalyptic scenario. The kind of book that can keep you awake till the small hours.”

“X marks the spot in Nicholas Sansbury Smith’s Hell Divers, a cross between Waterworld and Snowpiercer…but with monsters and airships. It’s a terrific blend of high-concept and wild action, all tied together with tough-as-nails characters that you care for as they face impossible odds. A must for fans of smart postapocalyptic storytelling.”

“I have to confess: Hell Divers is my favorite series Smith has written thus far…Hell Divers is written well, and the whole book flows at a nice pace…If you’re any kind of fan of science fiction or postapocalyptic fiction, then this is a book you have to check out. Smith once again raises the bar for himself, and I’m eager to see what he does next.”

“Hell Divers is an adrenaline rush with plenty of bullets, life-threatening situations, and exceptional world building to make a story that is easily immersive. Plus, the Sirens are seriously creepy.”

“This book for me is a solid six stars as Nicholas Sansbury Smith delivers yet again. Hell Divers unbelievably takes it another notch above his excellent Extinction Cycle series…The author has crafted yet another engrossing apocalyptic world in which we are plunged…If Hell Divers is anything to go by then this trilogy is destined to become a classic.”

“The intensity level of this book is off the charts!…The world was so solid, I swear I could see it when I closed my eyes at night…Together with the characters and the plot, Sansbury Smith has created a full-bodied sci-fi novel, and by far, one of the most entertaining reads of the year for me.”

“An action packed post-apocalyptic novel with a unique/interesting concept.”

“Rich in detail…Smith is a rare and unique storyteller; one that can grow a story into a very skillful piece of writing…R.C. Bray…plays his voice as if it were a musical instrument…He embraces the book and allows the book and its characters to shine. If you enjoy action and well-written stories of the apocalypse, then don’t miss out on this one. It is riveting!”

“Hell Divers offers genre fans everything they could ask for, from fresh takes on the post-apocalypse to social commentary reminiscent of Snowpiercer, and plenty of action.”