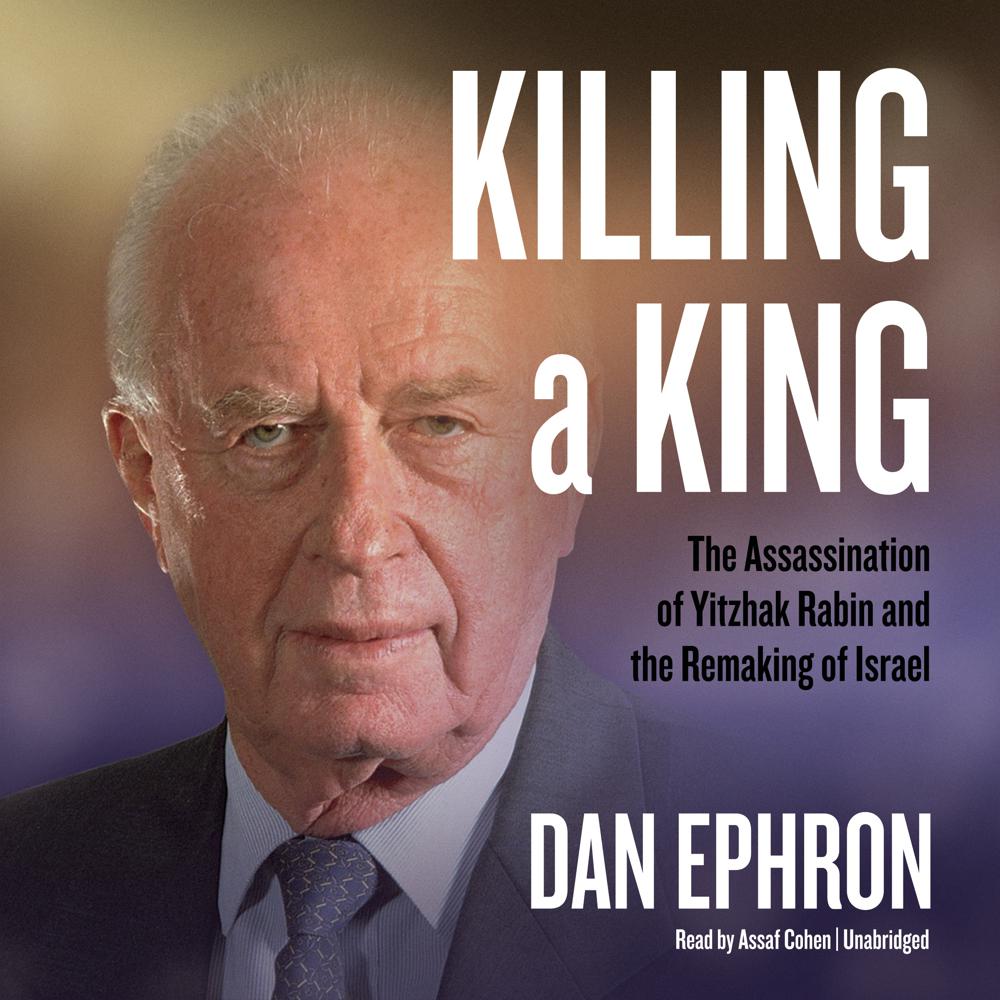 A riveting story about the murder that changed a nation: the assassination of Israeli Prime Minister Yitzhak Rabin

The assassination of Yitzhak Rabin remains the single most consequential event in Israel’s recent history and one that fundamentally altered the trajectory for both Israel and the Palestinians. Killing a King relates the parallel stories of Rabin and his stalker, Yigal Amir, over the two years leading up to the assassination, as one of them planned political deals he hoped would lead to peace—and the other plotted murder.

Dan Ephron, who reported from the Middle East for much of the past two decades, covered both the rally where Rabin was killed and the subsequent murder trial. He describes how Rabin, a former general who led the army in the Six Day War of 1967, embraced his nemesis, Palestine Liberation Organization leader Yasser Arafat, and set about trying to resolve the twentieth century’s most vexing conflict. He recounts in agonizing detail how extremists on both sides undermined the peace process with ghastly violence. And he reconstructs the relentless scheming of Amir, a twenty-five-year-old law student and Jewish extremist who believed that Rabin’s peace effort amounted to a betrayal of Israel and the Jewish people.

As Amir stalked Rabin over many months, the agency charged with safeguarding the Israeli leader missed key clues, overlooked intelligence reports, and then failed to protect him at the critical moment, in November 1995. It was the biggest security blunder in the agency’s history.

Through the prism of the assassination, much about Israel today comes into focus, from the paralysis in peacemaking to the fraught relationship between current Prime Minister Benjamin Netanyahu and President Barack Obama. Based on Israeli police reports, interviews, confessions, and the cooperation of both Rabin’s and Amir’s families, Killing a King is a tightly coiled narrative that reaches an inevitable, shattering conclusion. One can’t help but wonder what Israel would look like today had Rabin lived.

“In Killing a King, Ephron digs up important details that give new understanding to those terrible events and their enduring impact. His authoritative account is both a sharply etched political thriller and a meditation on all that has gone wrong in the Promised Land.”

“A chilling reminder that sometimes an assassin’s bullet really can alter the course of history.”

“Exceptional…An electrifying political narrative twinned with an old-fashioned crime story―of the sort that ought to be taught in journalism schools for its restraint, pacing, and expert creation of suspense…The book is a Greek tragedy told in split screen, a frame-for-frame chronicle of a deplorable death foretold.”

“If the story of Yitzhak Rabin and Yigal Amir has anything to teach, it’s that individuals matter…The opportunity that Rabin was trying to seize―however small―was there for a moment, and it may never come again.”

“A clear-eyed account…captures the way politics in this young and tiny country are uniquely and deeply personal.”

“In a crisp and lively narrative, Ephron walks the reader through the assassination itself and its aftermath…[and] infuses his book with relevance by circling back to bigger questions.”

“Carefully reported, clearly presented, concise, and gripping…a reminder that what happened on a Tel Aviv sidewalk twenty years ago is as important to understanding Israel as any of its wars.”

“The best account to date of the Rabin assassination and its aftermath.”

“Tells two stories in page-turning detail…Fascinating characterizations of real people and intrigue make this book appealing to readers of both fiction and nonfiction thrillers and anyone interested in the history of Israel.”

“In a single moment, the Jewish zealot Yigal Amir derailed the Oslo negotiations and forever altered the destinies of two nations…In tense, gripping prose, the author dissects Amir’s background…In a book with broad appeal, Ephron cogently analyzes the origins and ramifications of a national tragedy he reported on as a young journalist.”