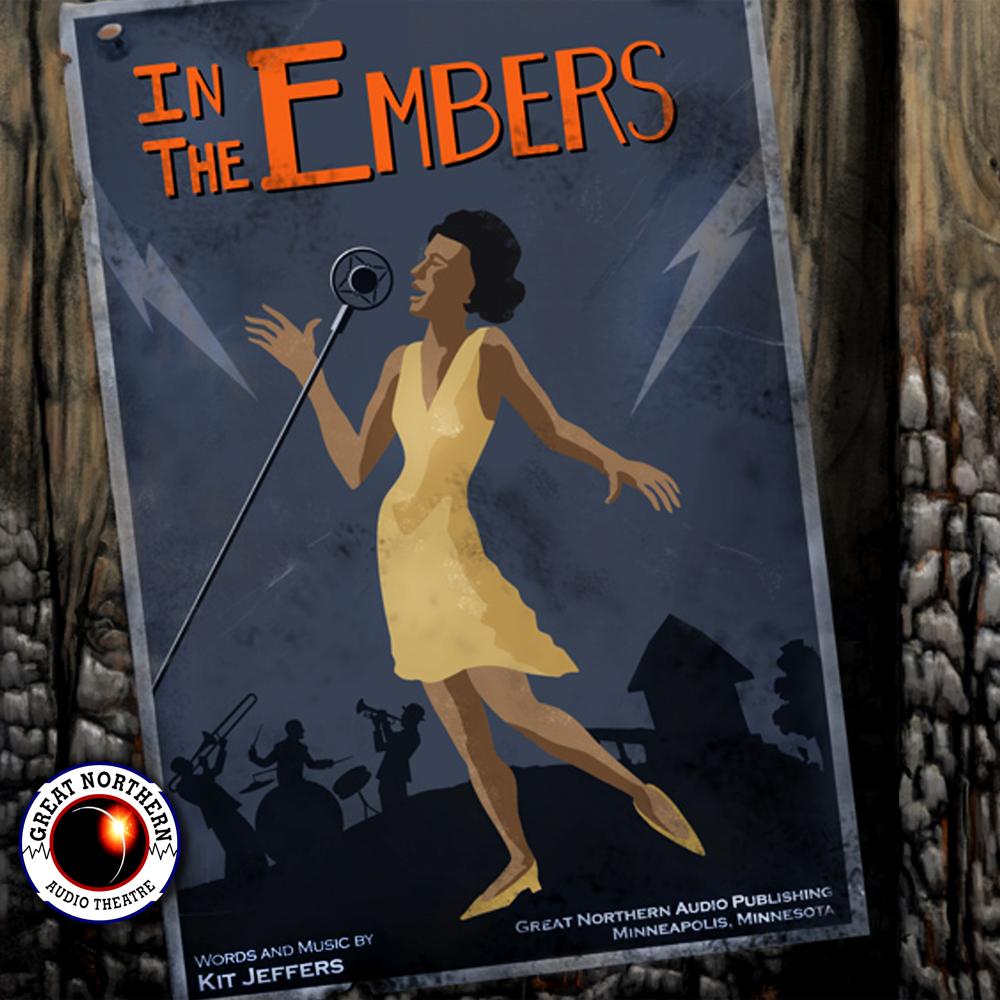 A song, a pressed flower, and the sound of two girl’s voices recovered from a burned wooden beam by using a brand new laser technique to read a charred surface like the grooves of an old 78rpm record. These are the clues that archaeologist, Digger Morgan, discovers while working on a routine dig at a Maryland Plantation. Who were the girls? When was the fire? The answers all lead to 1920s jazz pioneer, Kit Jeffers, whose voice mysteriously appears on Digger’s computer and whose existence remains haunted by a singular tragic event.

With the sound design, rhythm and detail of an independent film, IN THE EMBERS stars Audie-Award winner, Robin Miles, and features an original score, inventive sound effects and a fine ensemble cast.

BONUS TRACKS: Music from the production and interviews with the cast.

“The show was well recorded, the engineering, the sound effects—from thunder to bulldozer—quite good throughout…My congratulations to everyone involved in creating this exceptional audio drama that should hold up for a good long while to come.”

“Best known for clever live sci-fi shows, the dynamic duo of Jerry Stearns and Brian Price show that they have more up their sleeves…The dialogue in this short drama is as sharp as laser etchings, and, among a strong ensemble cast, the performances of Robin Miles and Olivia DuFord stand out. Listeners will be treated to some uniquely sonic special effects, original tunes, and an imaginative story written by two of contemporary audio drama’s best.”

“The production has great acting, music, soundscaping, and technical values, along with an absorbing set of characters and an intriguing, engaging situation. We liked the way that the fantasy hook—the recordings recovered from charred wood—led into a human drama filled with emotion, conflict, and sacrifice. Great Northern Audio Theatre did a wonderful job with this title, and we all agree that you fully deserved the Audie Award—you’ve given other audio producers a high standard to aim for.”

“Fascinating story, with some terrific performances.”

“I have long been a fan of Michael Crichton and his work. One of the hallmarks of his fiction was to take the next step from science into the possible. It was fiction based on reasonable progression of thought and science. It is always difficult to know where the science ends and the possible begins.That is true of Embers in so many ways. However, you have also taken a step not just in possibility but also to explore issues of purpose and desire by a representation of life of the past. The digital signal not only has words but also thoughts and being. It is not only the dead singer who speaks but also her very much alive presence or consciousness. Out of the past comes life that is in essence reborn. This is more than what Crichton delivers…The depth of the writing is significant.”