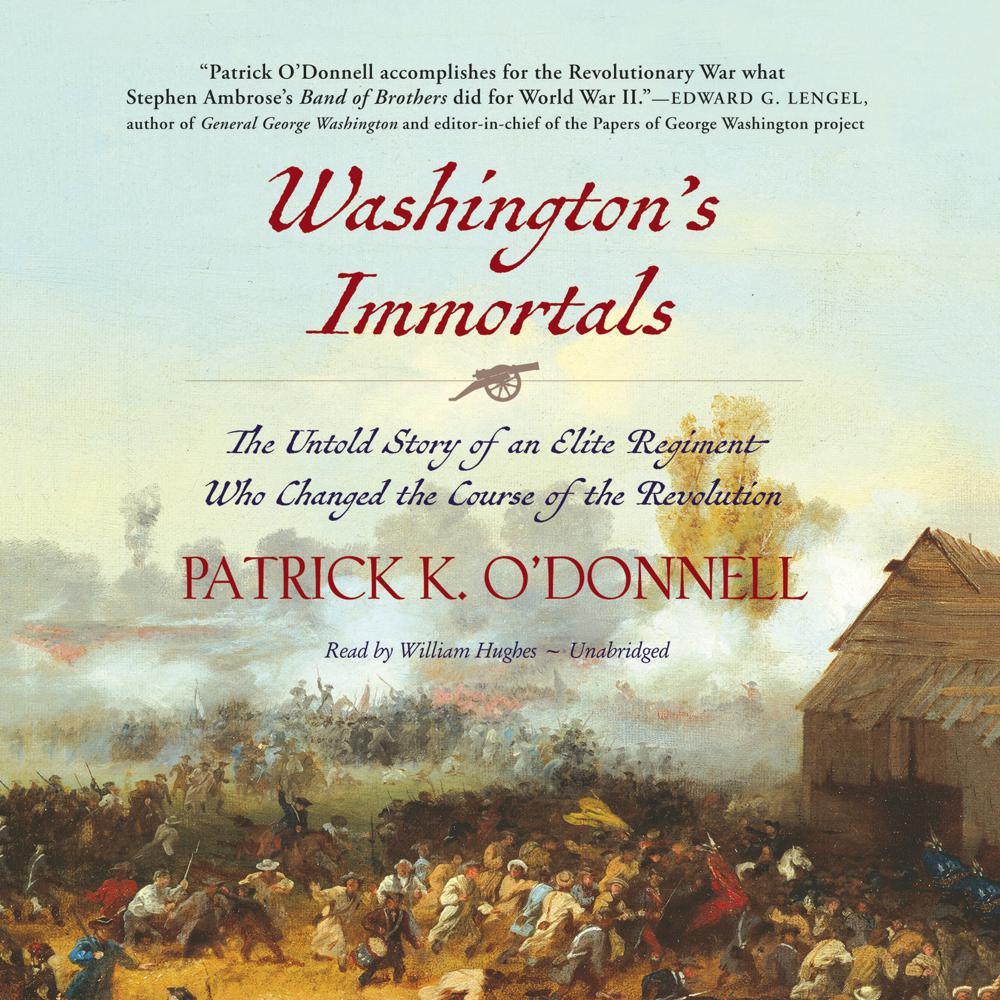 In August 1776, a little over a month after the Continental Congress had formally declared independence from Britain, the revolution was on the verge of a sudden and disastrous end. General George Washington found his troops outmanned and outmaneuvered at the Battle of Brooklyn, and it looked like there was no escape. But thanks to a series of desperate rear guard attacks by a single heroic regiment, famously known as the “Immortal 400,” Washington was able to evacuate his men, and the nascent Continental Army lived to fight another day.

Today, only a modest, rusted, and scarred metal sign near a dilapidated auto garage marks the mass grave where the bodies of the “Maryland Heroes” lie—256 men “who fell in the Battle of Brooklyn.” In Washington’s Immortals, bestselling military historian Patrick K. O’Donnell brings to life the forgotten story of this remarkable band of brothers. Known as “gentlemen of honor, family, and fortune,” they fought not just in Brooklyn but also in key battles, including Trenton, Princeton, Camden, Cowpens, Guilford Courthouse, and Yorktown, where their heroism changed the course of the war.

Drawing on extensive original sources, from letters to diaries to pension applications, O’Donnell pieces together the stories of these brave men—their friendships, loves, defeats, and triumphs. He explores their arms and tactics, their struggles with hostile loyalists and shortages of clothing and food, their development into an elite unit, and their dogged opponents, including British general Lord Cornwallis. And through the prism of this one group, O’Donnell tells the larger story of the Revolutionary War. Washington’s Immortals is gripping and inspiring boots-on-the-ground history, sure to appeal to a wide audience.

“Washington’s Immortals tells the extraordinary story of the most important band of brothers, forgotten men who changed the course of American history. This is O’Donnell at his very best—a deeply moving, superbly researched page-turner.”

“Using primary sources from both sides of the Atlantic, O’Donnell effectively traces the story of Maryland’s immortals, describing the battles authentically along with the precariousness of the American cause. This book will be of interest to both general readers and scholars interested in the military aspect of the American Revolution.”

“O’Donnell deploys a fusillade of fact and fresh research in a Revolutionary War history rich in irony and event…With a firm grasp of tactics, strategy, and the sociopolitical landscape, O’Donnell captures the horror and absurdities of the war.”

“Patrick O’Donnell has pioneered the pursuit of dogged research and the collection of revealing oral histories to produce moving accounts of key moments in American history…Washington’s Immortals is a fascinating story…It will definitely keep you turning pages.”

“Patrick K. O’Donnell’s newest work is not so much a forgotten page of our history as it is a truly untold story—a story that takes us into the lives of a unit of Marylanders caught up in a world-changing struggle to throw off the shackles of colonialism…The author’s admirably researched and gripping narrative is a tribute to these forgotten patriot-warriors, providing a long overdue contribution to our history. This terrifically absorbing account is a must-read for students of American military history.”

“Military historian Patrick O’Donnell has achieved yet another milestone in his distinguished writing career with Washington’s Immortals, which relates an amazing Revolutionary War tale of pluck and devotion among one of the US Army’s first elite outfits, the Maryland Line.”

“Patrick O’Donnell is blessed with a rare gift for storytelling and a keen empathy for the realities of soldiers in combat. He walks in the footsteps of his subjects like few other historians are able—or willing—to do. In this impressively researched, well-written book, he brings the world of the American Revolution to life with an immediacy that almost defies belief…Washington’s Immortals is a must read for anyone even remotely interested in the American combat soldier, regardless of the era.”