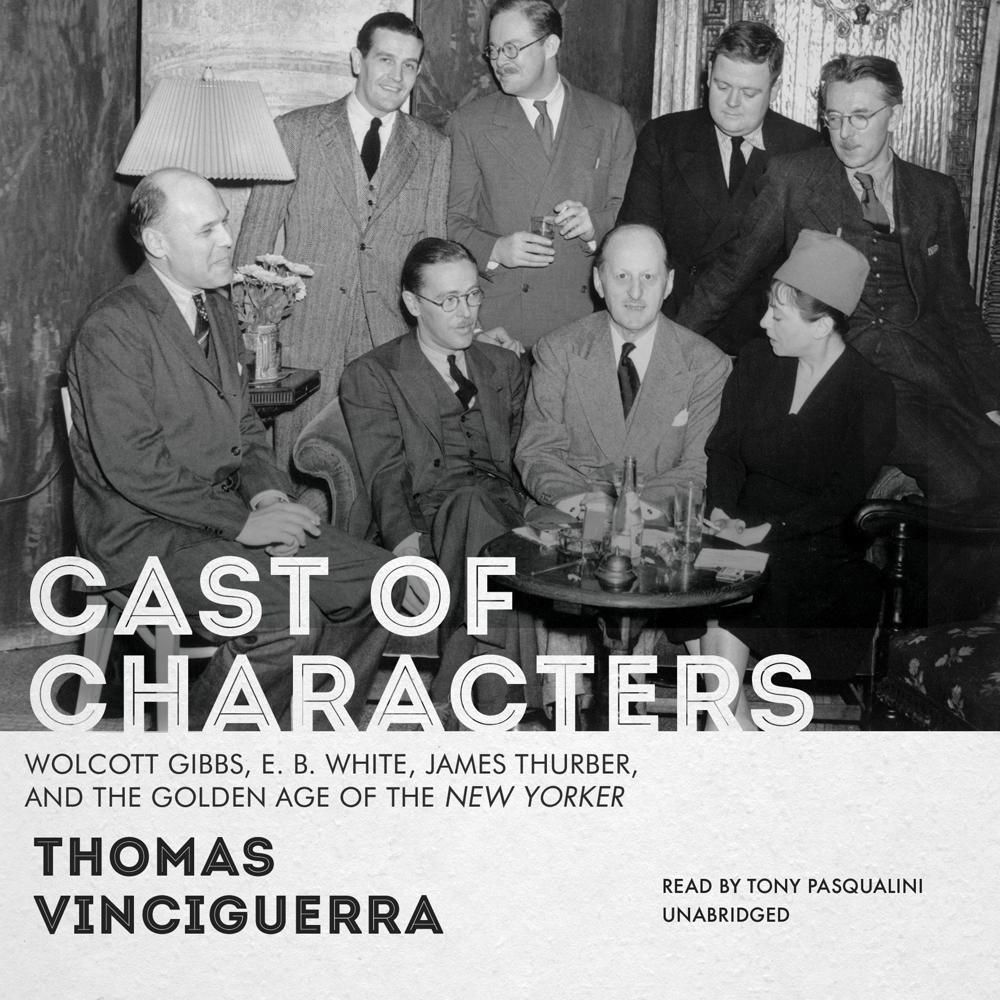 The professional and personal lives of the pioneers of an enduring magazine, the New Yorker

From its birth in 1925 to the early days of the Cold War, the New Yorker slowly but surely took hold as the country’s most prestigious, entertaining, and informative general-interest periodical. In Cast of Characters, Thomas Vinciguerra paints a portrait of the magazine’s cadre of charming, wisecracking, driven, troubled, and brilliant, writers and editors.

He introduces us to Wolcott Gibbs, theater critic, all-around wit, and author of an infamous 1936 parody of Time magazine. We meet the demanding and eccentric founding editor Harold Ross, who would routinely tell his underlings, “I’m firing you because you are not a genius,” and who once mailed a pair of his underwear to Walter Winchell, who had accused him of preferring to go bare-bottomed under his slacks. Joining the cast are the mercurial, blind James Thurber, a brilliant cartoonist and wildly inventive fabulist; and the enigmatic E. B. White—an incomparable prose stylist and Ross’ favorite son—who married the New Yorker’s formidable fiction editor, Katharine Angell. Then there is the dashing St. Clair McKelway, who was married five times and claimed to have no fewer than twelve personalities, but was nonetheless a superb reporter and managing editor alike. Many of these characters became legends in their own right, but Vinciguerra also shows how, as a group, the New Yorker’s inner circle brought forth a profound transformation in how life was perceived, interpreted, written about, and published in America.

Cast of Characters may be the most revealing―and entertaining―book yet about the unique personalities who built what Ross called not a magazine but a “movement.”

“Vinciguerra…lets us visit with the giants and see them at work, home, and play. It’s a beautiful book.”

“Reading Thomas Vinciguerra’s Cast of Characters is like being at a tantalizing gossip session about the star writers and supporting players of the New Yorker in its formative years. The book is entertaining, often surprising, and deeply interesting. Vinciguerra is an avid chronicler and a fair one.”

“Vinciguerra gives us substance along with the bon mots and, in so doing, evokes the bright, brilliant, long-ago Manhattan that all newcomers have dreamed of finding.”

“Fresh and invigorating…It’s to Vinciguerra’s great credit that he manages to avoid both condescension and hagiography in writing about the flawed, brilliant people behind it.”

“Captures the eccentricities and idiosyncrasies of its editors and writers…Will be embraced by faithful New Yorker readers.”

“By conducting extensive interviews and combing The New Yorker‘s archives, the author brings to life the personalities who not only helped make the magazine a success, but who shaped the modern American literary landscape.”

“New Yorker readers are a dedicated lot and will snap this ‘golden age’ volume up, adding it to their view of the vibrant, eccentric, shape-shifting rag that touches them, and the world, with its words and pictures.”

“Vinciguerra brings to life the colorful personalities who shaped the publication…These portraits are an entertaining addition to the history of this influential magazine.”

“A fresh view of the much-chronicled magazine, focused on the three writers/editors who, with founder Harold Ross, shaped its sophisticated stance in the years between the world wars…Ably captures the antic spirit of the New Yorker’s first heyday.”

“This graceful group memoir of the eccentrics and geniuses who created the New Yorker magazine will charm anyone who cares about the lives and times of the likes of E. B. White, Wolcott Gibbs, James Thurber, and John O’Hara.”

“Irresistible…A banquet of information about the good writing and bad manners of the eccentric crew who made a myth both of themselves and of the journal they made famous. Vinciguerra writes a sharp, crisp sentence, and tells his story with brio.”