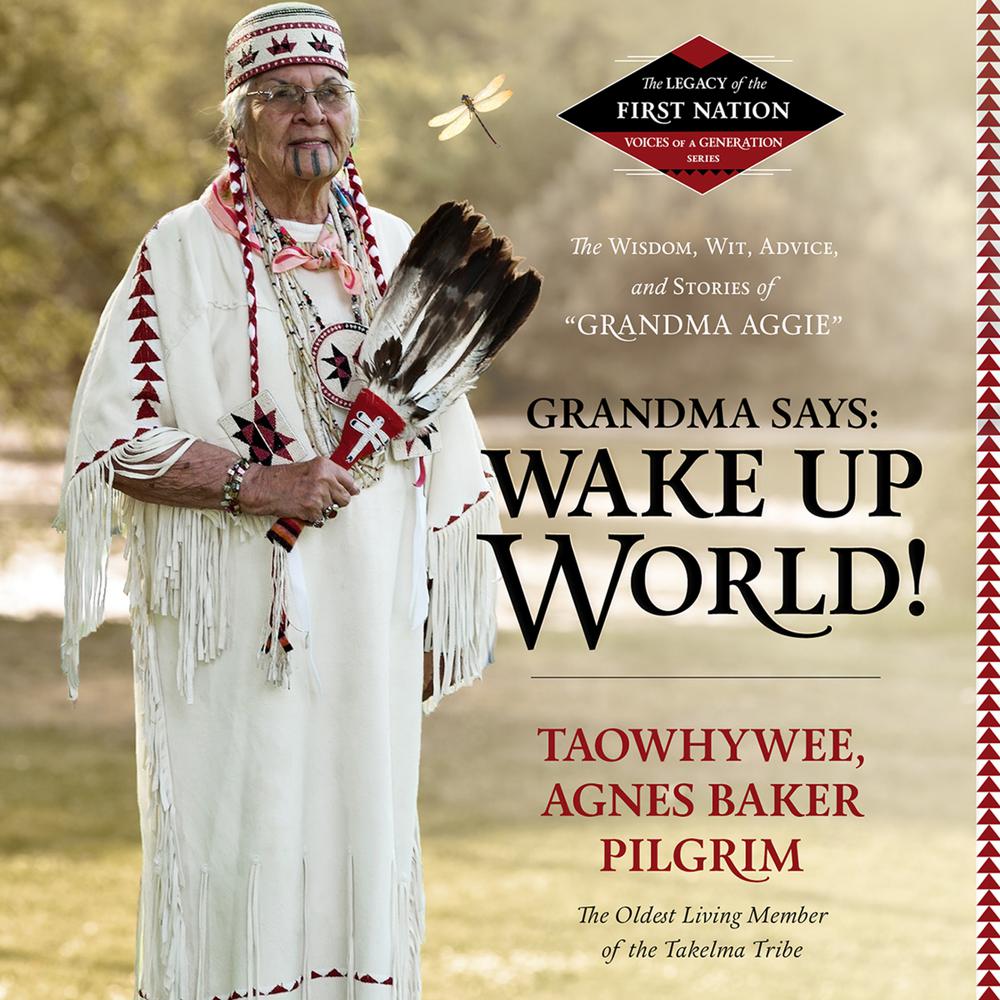 Agnes Baker Pilgrim, known to most as Grandma Aggie, is in her nineties and is the oldest living member of the Takelma Tribe, one of the Confederated Tribes of Siletz.

A descendant of both spiritual and political tribal leaders, Grandma Aggie travels tirelessly around the world to keep traditions alive, to help those in need, and to be a voice for the voiceless, helping everyone to remember to preserve our Earth for animals and each other in a spiritual environment.

Considered an excellent speaker, she has mesmerized her audience wherever she appears, and now her wit, wisdom, memories, advice, stories and spirituality have been captured for all to hear.

Honored as a “Living Cultural Legend” by the Oregon Council of the Arts, Grandma Aggie here speaks about her childhood memories, about her tribe and her life as a child growing up in an area that often didn’t allow Indians and dogs into many public places, as well as about such contemporary issues as bullying, teen suicide, drugs and alcohol, Pope Francis, President Obama, water conservation, climate change, and much more.

This is an amazing recording of one of the oldest and most important voices of the First Nation and of the world. Her stories and advice will mesmerize and captivate you, as well as provide a blueprint for how all the inhabitants of the earth can live together in harmony, spirituality, and peace.

“Grandma Aggie, the oldest living member of the Takelma Tribe, one of the Confederated Tribes of Siletz, delivers her message with sass and candor…Recommended for libraries serving Native Americans and Oregon and Washington State for cultural references.”

“Grandma Aggie has an amazing gift for making wisdom accessible to all. In Grandma Says: Wake Up, World!, Agnes Baker Pilgrim, the oldest member of the Takelma Tribe of Oregon, demonstrates a wisdom that is simple in nature and profound in scope. Through story and the history of her people, she demonstrates that the challenges we face as a global people can be solved by communing with nature and each other. Each page brought a smile to face as she expressed simple truths with kindness, grace, and humility. A must-read for anyone of any age looking to live a fuller, calmer life.”

“This audiobook is a series of recordings by the oldest living member of the Takelma tribe of Oregon, known as ‘Grandma Aggie.’ Grandma Aggie tells the story of her life authentically and organically—in genuine storytelling fashion—not reading from a script or book. As she talks about her life, she conveys her positive attitude and gratitude. She offers advice on how to live well, voices her opinions on drugs and violence, and shows her determination to protect the environment…One feels as if Grandma Aggie, an elder of the First Nation, is giving us stories that are vital to our future.”