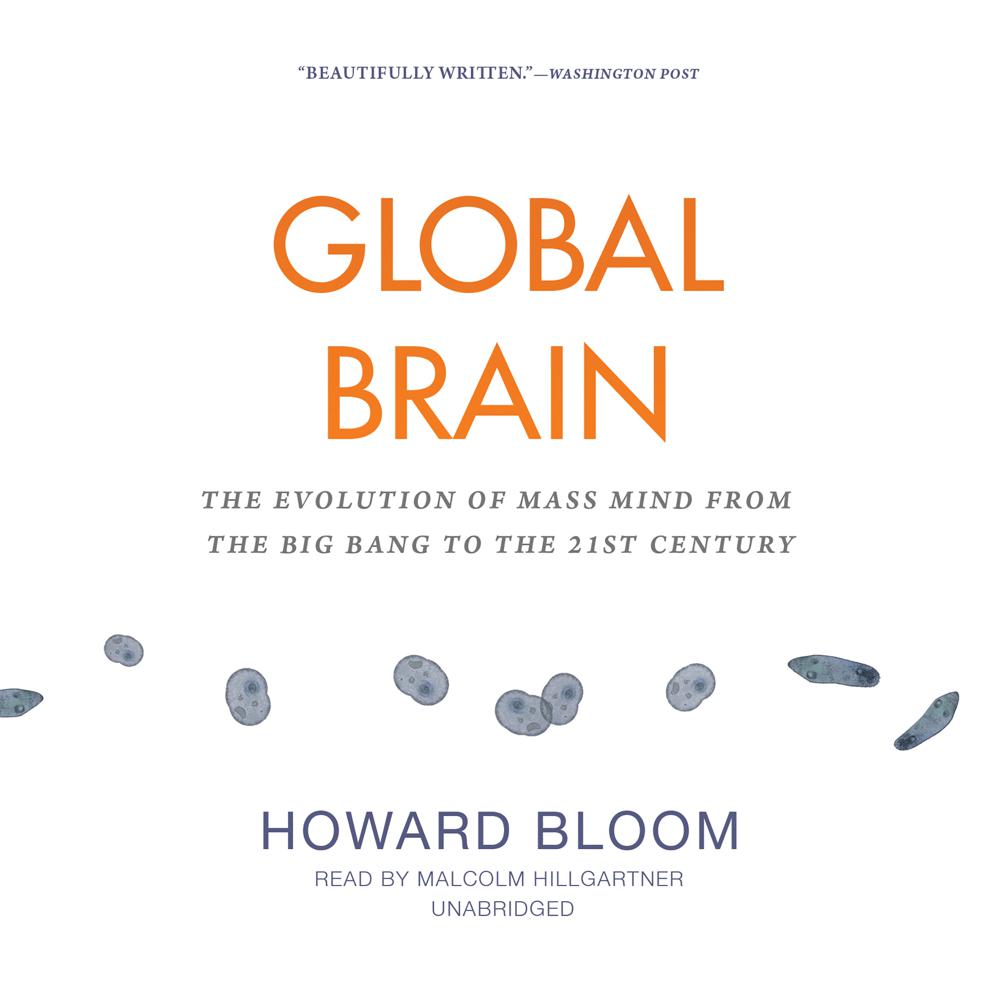 In this extraordinary follow-up to the critically acclaimed The Lucifer Principle, Howard Bloom—one of today’s preeminent thinkers—offers us a bold rewrite of the evolutionary saga. He shows how plants and animals (including humans) have evolved together as components of a worldwide learning machine. He describes the network of life on Earth as one that is, in fact, a “complex adaptive system,” a global brain in which each of us plays a sometimes conscious, sometimes unknowing role. And he reveals that the World Wide Web is just the latest step in the development of this brain. These are theories as important as they are radical.

Informed by twenty years of interdisciplinary research, Bloom takes us on a spellbinding journey back to the big bang to let us see how its fires forged primordial sociality. As he brings us back via surprising routes, we see how our earliest bacterial ancestors built multitrillion-member research-and-development teams a full 3.5 billion years ago. We watch him unravel the previously unrecognized strands of interconnectedness woven by crowds of trilobites, hunting packs of dinosaurs, flocks of flying lizards, troops of baboons making communal decisions, and adventurous tribes of protohumans spreading across continents but still linked by primitive forms of information networking. We soon find ourselves reconsidering our place in the world. Along the way, Bloom offers us exhilarating insights into the strange tricks of body and mind that have organized a variety of life forms: spiny lobsters, which, during the Paleozoic Era, participated in communal marching rituals; and bees, which, during the age of dinosaurs, conducted collective brainwork. This fascinating tour continues on to the sometimes brutal subculture wars that have spurred the growth of human civilization since the Stone Age. Bloom shows us how culture shapes our infant brains, immersing us in a matrix of truth and mass delusion that we think of as reality.

Global Brain is more than just a brilliantly original contribution to the ongoing debate on the inner workings of evolution; it is a “grand vision,” says the eminent evolutionary biologist David Sloan Wilson, a work that transforms our very view of who we are and why.

“This lusty tome generated by Bloom’s voracious reading habit and extraordinary talent for explanation proclaims that groups of individuals—from people to vervet monkeys to bacteria—organize themselves, create novelty, alter their surroundings, and triumph to leave more offspring than loner individuals. A stunning commitment to scientific evidence, this sequel to The Lucifer Principle ought to purge the academic world of ‘selfish genes’ and the neodarwinist dogma of ‘individual selection.’”

“A soaring song of songs about the amorous origins of the world and its almost medieval urge to copulate.”

“A modern-day prophet, Bloom compels us to admit that evolution is a team sport. This is a picture of the universe in which human emotions find their basis in the survival of matter, and the atoms themselves are held together with love. I am awestruck.”

“In a superbly written and totally original argument, Howard Bloom continues his one-man tradition of tackling the taboo subjects. With a marvelously erudite survey of life and society from bacteria to the Internet, he demonstrates that group selection is for real and the group mind was there from the start. What we are entering now is but the latest phase in the evolution of the global brain. This is a must read for professionals and laymen alike.”

“Howard Bloom’s Global Brain is filled with scientific firsts. It is the first book to make a strong, solidly backed, and theoretically original case that we do not live the lonely lives of selfish beings driven by selfish genes, but are parts of a larger whole. It is the first to propose that sociality was implicit in the start of the universe—the big bang. Global Brain is the first book to present strong evidence that evolutionary, biological, perceptual, and emotional mechanisms have made us parts of a social learning machine—a mass mind which includes all species of life, not just humankind. It is the first to take this idea out of the realm of mysticism and into the sphere of hard-nosed, data-derived reality. And it is one of the few books which carry off such grand visions with energy, excitement, and keen insight.”

“[I] am seriously awed, near overwhelmed by the magnitude of what [Bloom] has done. I never expected to see, in any form, from any sector, such an accomplishment. I doubt there is a stronger intellect than Bloom’s on the planet.”

“Global Brain is wonderful! I’m amazed at the book’s knowledge and the scope of its reach. The ‘mass mind’ idea is wondrous, smart, and immensely creative.”

“As someone who has spent forty years in psychology with a long-standing interest in evolution, I’ll just assimilate Howard Bloom’s accomplishment and my amazement.”

“Howard Bloom has a fascinating vision of the interplay of life and a compelling style which I found captivating.”

“Howard Bloom’s work is simply brilliant and there is nothing else like it, anywhere—we’ve looked, as have our colleagues. Global Brain is powerful, provocative, and mind-blowing.”

“Stunning! Howard Bloom has done it again. He is certainly on to something.”