Someone Comes to Town, Someone Leaves Town
Cory Doctorow 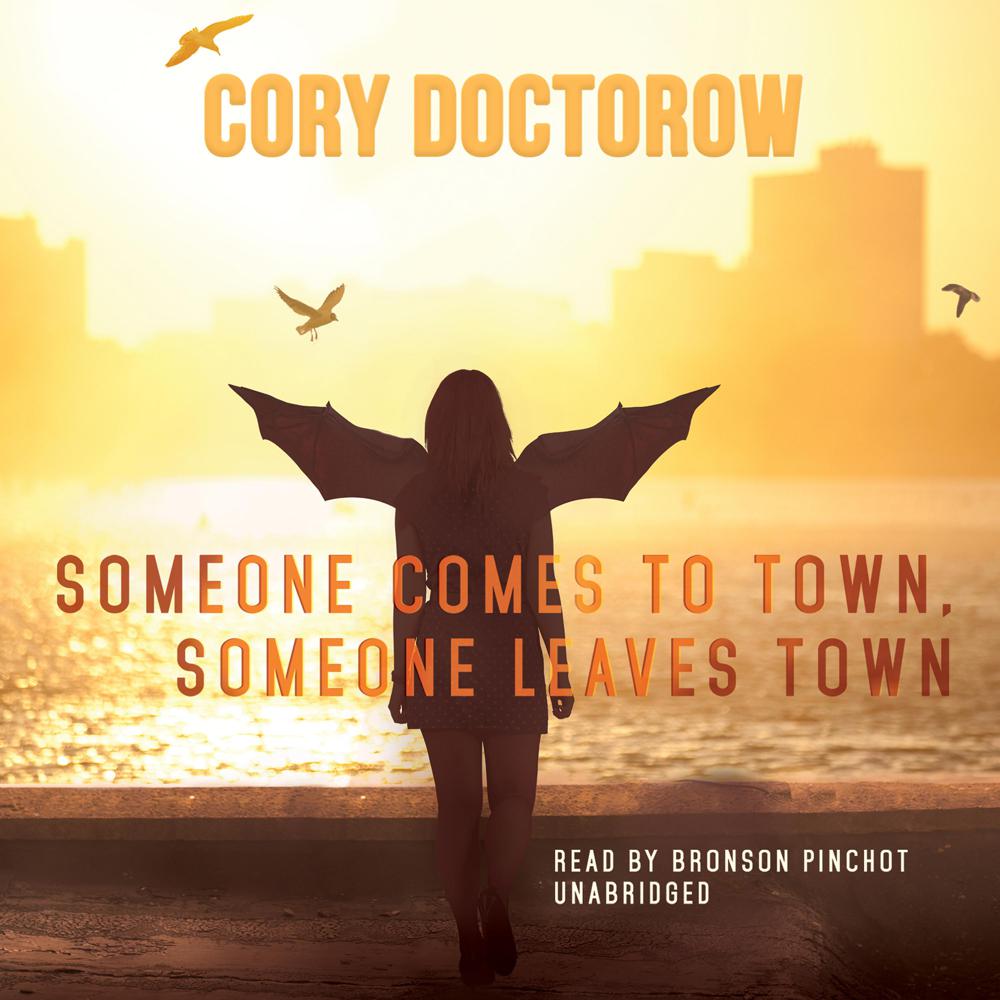 Alan is a middle-aged entrepreneur in contemporary Toronto who has devoted himself to fixing up a house in a bohemian neighborhood. This naturally brings him in contact with the house full of students and layabouts next door, including a young woman who, in a moment of stress, reveals to him that she has wings—wings, moreover, that grow back after each attempt to cut them off.

Alan understands. He himself has a secret or two. His father is a mountain, his mother is a washing machine, and among his brothers are a set of Russian nesting dolls.

Now two of the three nesting dolls, Edward and Frederick, are on his doorstep—well on their way to starvation because their innermost member, George, has vanished. It appears that yet another brother, Davey, whom Alan and his other siblings killed years ago, may have returned … bent on revenge.

Under such circumstances it seems only reasonable for Alan to involve himself with a visionary scheme to blanket Toronto with free wireless Internet connectivity, a conspiracy spearheaded by a brilliant technopunk who builds miracles of hardware from parts scavenged from the city's dumpsters. But Alan's past won't leave him alone—and Davey is only one of the powers gunning for him and all his friends.

“His best work to date.”

“After finishing Someone Comes to Town, Someone Leaves Town, I was surprised to find that botherment and uncertainty had vanished into satisfaction. Somehow this loose-jointed, wandering, ramshackle compendium of casual weirdness (perfectly expressed in the title) produces the kind of intimacy—even authenticity—more often associated with a personal journal, a blog, even autobiography. Yes, the mountain’s son will have to confront sheer Evil, but he also struggles with the complexities of friendship, outsiderhood, progressive ideals, and the awkward hinterland between sex and love.”

“Fresh, unconventional…In this inventive parable about tolerance and acceptance, [Doctorow] demonstrates how memorably the outrageous and the everyday can coexist.”

“Doctorow breaks new ground in his latest novel, a nonlinear tale of the relationship between the fantastic and the freakish, of real life and cyberspace. The cast of name-shifting characters whose reality transcends the peculiarities of their circumstances and a search for identity in a world of impermanence and utter strangeness calls into question the nature of truth in a world where knowledge is both instantaneous and unreliable. Magical realism and literary iconoclasm abound in a novel that should appeal to fans of experimental fiction in a near-future setting.”

“Fine modern fantasy…with the potential to please both SF and mainstream readers. This chimera of a novel takes a plot with the geek appeal of a Neal Stephenson story and combines it with a touching family tale built out of absurdist elements that could have come from Italo Calvino or Kurt Vonnegut…Smart, clever, delightful stuff; it falls short of perfect—there are some unconvincing moments—but it’s still likely to be one of the better non-magic-and-dragon fantasies this year.”