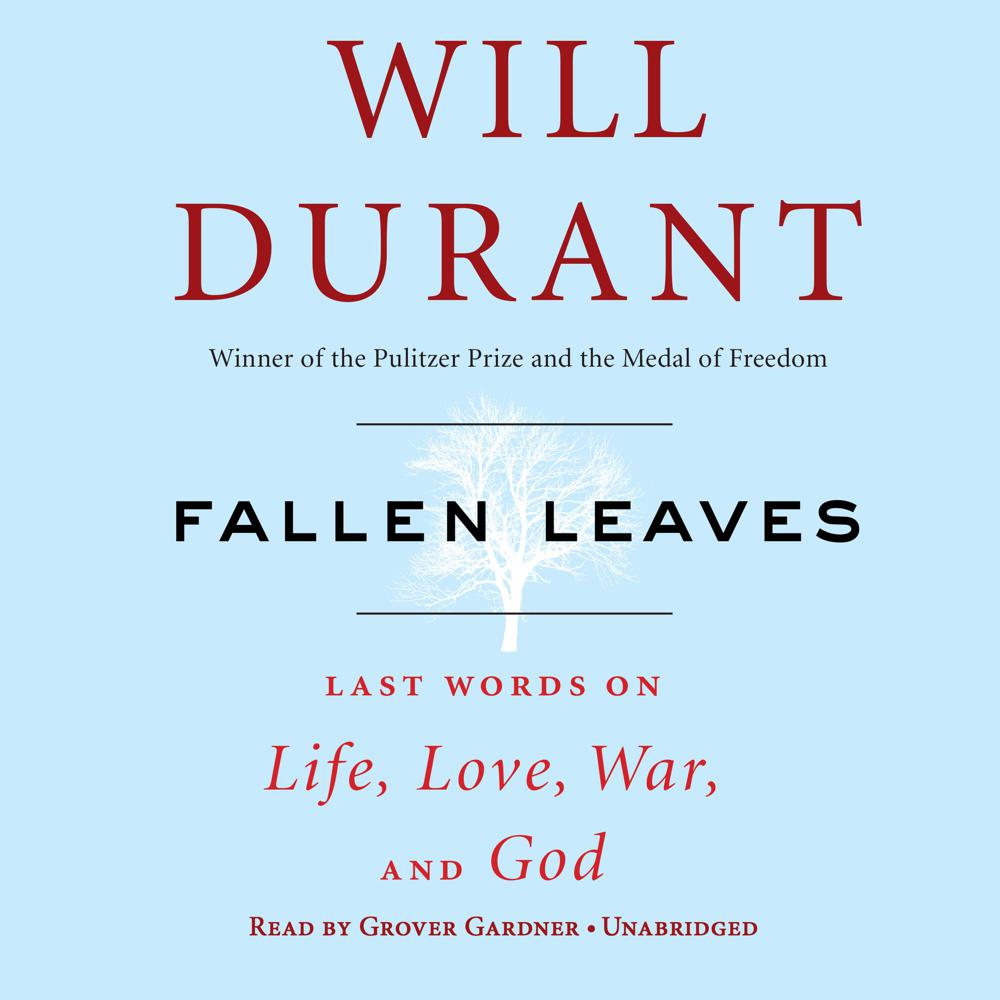 The final and most personal work from Pulitzer Prize–winning author and historian Will Durant—discovered thirty-two years after his death—is a message of insight for everyone who has sought meaning in life or the council of a wise friend in navigating life's journey.

From 1968 to 1978, Will Durant made four public allusions to the existence of Fallen Leaves. One, in 1975, hinted at its contents: "a not very serious book that answers the questions of what I think about government, life, death, and God." And in 1975: "I propose…to answer all the important questions, simply, fairly, and imperfectly." Even into his nineties, he worked on the book daily, writing it out on legal notepads. Upon his death in 1981, no one, not even the Durant heirs, knew if he had completed it, or even if it still existed. Thirty-two years later, in a granddaughter's attic trunk, the manuscript was discovered.

Fallen Leaves is Will Durant's most personal book. It is precisely as he described: twenty-two short chapters on everything from youth and old age, religion and morals, to sex, war, politics, and art. The culmination of Durant's sixty-plus years spent researching the philosophies, religions, arts, sciences, and civilizations from across the world, Fallen Leaves is the distilled wisdom of a gifted scholar with a renowned talent for rendering the insights of the past accessible. In its preface Durant mentions that over the course of his career he received letters from "curious readers who have challenged me to speak my mind on the timeless questions of human life and fate." With Fallen Leaves he accepted their challenge. It contains strong opinions, elegant prose, and deep insights into the human condition as only Will Durant could provide, as well as his revealing conclusions about the perennial problems and greatest joys we face as a species.

“This long-awaited release is a collection of essays on religion, race, politics, art, and science…Some passages, such as his observations on youth and middle age, are personal and specific, while others, such as his ruminations on the existence of God, border on philosophy…A thought-provoking array of opinions.”

“A work that demands we think, and it is a worthy conclusion to a long and distinguished career.”

“Final messages of wisdom from a well-known scholar…who explores the profundity of being human, whether that means examining an infant’s first moments of life, why religion has such a strong influence in so many people’s lives, or why racism is still prevalent in the United States. Durant also meditates on world governments and why we grow more conservative as we age, offers his opinions on sex and morality, and sings ‘a hymn in praise of women.’ While some of the thoughts are dated, due to the time in which they were written, or might seem a bit extreme…his philosophical views are eye-opening and offer readers a chance to re-examine their own feelings regarding the human race and what it has and has not managed to accomplish in its short stint on Earth.”

“After a long career of summarizing the events and views of others, in the 1960s and 1970s, Pulitzer Prize-winning historian Durant set out to document his views on the most important topics of human existence…In twenty-two brief essays on everything from youth to old age, politics, Vietnam, art, education, and the lessons of history, Durant expresses his attitudes and thoughtful opinions with grace and occasionally with wisdom. His paternalistic, romanticized views on youth and love, and his benevolent sexism, will strike the reader as quaint and dated…He is most engaging when telling the story of his life and his insights into the processes of history. Most of the work, however, offers evidence of just how different today’s world is from the one the philosopher inhabited.”

“Grover Gardner’s polished reading…is engaging, even entertaining, with an easy swing of tones that match the meanings and add emphasis at apt places and an expressiveness that’s relaxed, sensitive, and intelligent. He captures perfectly a thread of self-deprecating modesty that offsets the doctrinaire quality of Durant’s pronouncements. Durant’s modest manner, some thoughtful passages, and Gardner’s skill…convey[s] it all to the listener.”