Edge of the Sky
Roberto Trotta 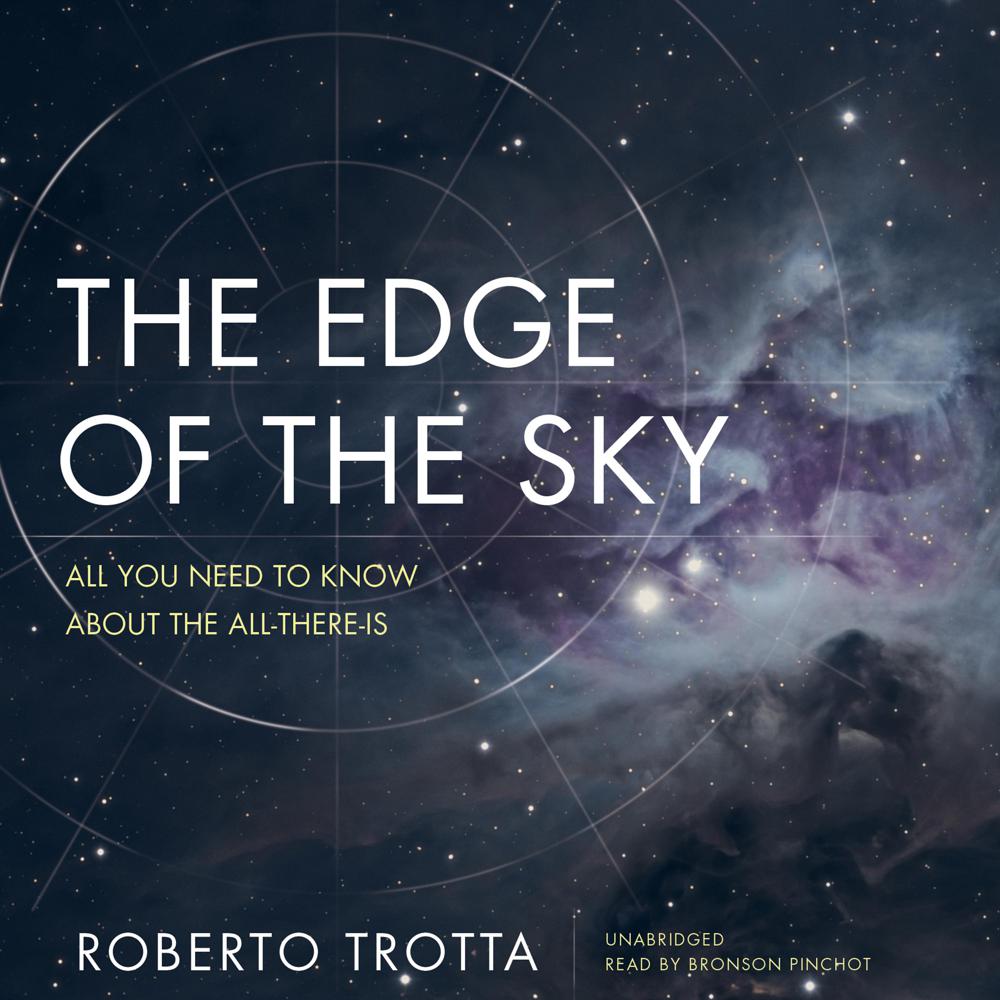 From the big bang to black holes, from dark matter to dark energy, from the origins of the universe to its ultimate destiny, The Edge of the Sky tells the story of the most important discoveries and mysteries in modern cosmology—with a twist. The book's lexicon is limited to the thousand most common words in the English language, even excluding physics, energy, galaxy, and universe. Through the eyes of a fictional scientist (Student-People) hunting for dark matter with one of the biggest telescopes (Big-Seers) on Earth (Home-World), cosmologist Roberto Trotta explores the most important ideas about our universe (All-There-Is) in language simple enough for anyone to understand.

A unique blend of literary experimentation and science popularization, this delightful book is a perfect gift for any aspiring astronomer. The Edge of the Sky tells the story of the universe on a human scale, and the result is out of this world.

Cosmology and the universe, Astrophysics

“The extraordinary story of the Universe and our journey to understand it is not an easy one to tell to the general public. But because it is the story that binds us all together, it is important to tell it in myriad ways to reach as many people as possible. The Edge of the Sky is an inventive, enjoyable, and thought-provoking contribution to that effort.”

“[A] surprisingly clear, and often poetic, primer on such complicated topics as the big bang, dark energy, and the possibility of multiverses.”

“The idea behind this book…is to explain everything we know about the world using only the ten hundred most used words. This is much harder than it sounds because a lot of the words that people who study our world (and all that is outside it) like to use are ones that not many people use very much.”

“In less capable hands, this experiment could backfire and become confusing rather than charming. In Trotta’s, ordinary words are bent and spun to achieve extraordinary results. He uses his self-imposed limits to find new ways to describe reality…One of the pleasures of the book is the way it grounds distant places or obscure concepts in homely language…Another is the little surprises that pop up in Trotta’s sentences, which detonate like scientific Zen koans…[A] playful, elegant little story.”

“Trotta’s deft word choices quickly draw the reader into a surprisingly vivid alternate reality where student-persons (scientists) strive to pierce the mysteries of the All-There-Is: the universe….[T]he spare writing is elegant, even poetic. Literary experiments tend either to work or to flail with awkwardness; in Trotta’s hands, this beautifully written book, with its limited vocabulary, soars.”

“A simplified but by no means simplistic introduction to modern cosmology and physics…An entertaining exercise, in the end, for those student-people who like to ponder the All-There-Is while testing the always-inadequate limits of language.”

“Bronson Pinchot’s superb performance showcases what turns out to be a charming masterpiece of scientific storytelling. Pinchot introduces listeners to the 1,000 most commonly used words. His recitation takes on the quality of poetry, with its changing meter and playful inflections. Who knew a list could be so enchanting? From there, the story of all-there-is unfolds, and Pinchot’s careful narration brings Trotta’s creative wordplay to life so that listeners quickly learn to translate simple words into complex concepts. A treat for the imagination worthy of repeat listens. Winner of AudioFile Earphones Award.”

“Cosmology and astrophysics are confusing at the best of times. But, against all the quantum odds, Dr. Roberto Trotta has managed to explain the topics using just one thousand unique words. Readers of The Edge of the Sky will be treated to a delightful, poetic journey into our world, other worlds, and beyond without ever feeling like their vocabulary is holding them back. And yet that is not this book’s greatest achievement. More impressive than the linguistic poetry and more profound than the hard science herein is the overwhelming sense of awe and wonder this book gifts the reader.”

“A wonder-full not-afraid story-telling try-it-and-see, about big-sky-study of today with only the ten-hundred most used words. Very not-usual, most good. Fun, too. Buy now!”

“In a style akin to magical realism, Roberto Trotta tells the story of the cosmos—an engaging and informative book.”

“It is often said that a picture is worth a thousand words, but this unique book reverses that old adage by employing only the thousand most commonly used English words to paint a wonderfully vivid picture of the story of our universe. The Edge of the Sky contains a compelling, almost poetic account of cosmology, encompassing the Big Bang, dark matter, dark energy, the Higgs boson, and much more and is presented in a manner that will be accessible to all. This book is a must-read for anyone interested in learning about our universe, from here to the Edge of the Sky and beyond.”

“In this unusual and engaging book, short in length but long in ideas, Roberto Trotta uncovers the mysteries of the universe, from the Big Bang (‘Big Flash’) to the dark energy (‘dark push’), in a highly original and understandable way. Once I started reading, I could not put the book down.”

“The Edge of the Sky ranges from exoplanets, through dark matter and dark energy and even supersymmetry…without any technical words. Speaking as someone who works on the ‘Big Ring’ in the ‘city in a land full of safe places to put your money in’: this is big fun, and amazing that so much can be said in so few words.”

“The Edge of the Sky is a highly original book, which explains the foundations and the latest discoveries and ideas in astronomy: from planets and life elsewhere in the universe to dark energy and the multiverse. Roberto Trotta, a leading cosmologist from Imperial College London, has managed to achieve this by only using fewer than the thousand most common words of the English language. This is an inspiring book for everyone.”

“Never before did we know so much about our universe, the All-There-Is. But are we getting any closer to understanding essential components of its true nature, dark matter and dark energy, which dominate by far over the visible, familiar matter? With rare candor and true learning, Roberto Trotta takes us on an intimate adventure in search of possible answers, as he charts the story of our universe from a tiny fraction of a second after the Big Bang to the present—while conveying at the same time the very human, at once exhilarating and humbling experience of this search. All this by using merely seven hundred and seven out of the thousand most common words of the English language, charmingly arranged to shake off the familiar, leaving us to marvel at our Home-World and at the mysteries that lie beyond its edge.”

“Jargon is a perpetual problem in communicating frontier science to a general audience: everyday specialists are so immersed in their specialized argot that we cease to be aware of the barrier it creates. I therefore applaud this attempt to describe the current state of cosmology in the most stripped-down language possible. The result is transparent, and also full of marvelously vivid turns of phrase, such as ‘Mr. Einstein’s Dark Push.’ Definitely an original and distinctive addition to the literature in this area.”

“A tale as beautiful as the great spiritual stories—with the difference that this one is built on a solid foundation of fact.”

“A delightful little gem for adults and children alike that leads you on a unique journey with its hypnotic, disarming prose. There are many books that attempt to creatively explain the universe in simple terms; this is one of the few that succeeds.”

“Enjoyable…[Trotta’s] extremely original approach conveys all the information with the most minimalistic use of language. I highly recommend this book to anyone interested in learning about the latest discoveries about our universe within the framework of an ‘avant-garde’ and experimental writing style.”

“Roberto Trotta’s clever metaphors illuminate dark matter and dark energy. This book is a delightful, poetic, and informative read about all there is in the universe.”

“The Edge of the Sky is an enthralling read that turns on its head the conventional (and in my view thoroughly misguided) wisdom that complicated scientific ideas can only be described using complicated language. Roberto Trotta takes the reader on a fascinating and entertaining journey through the very latest discoveries in astrophysics and cosmology, using only the thousand most common English words but never compromising on the clarity and detail of his scientific descriptions. The Edge of the Sky captures with child-like wonder the mysteries of the cosmos in language accessible to everyone, making it eminently suitable for children of all ages!”