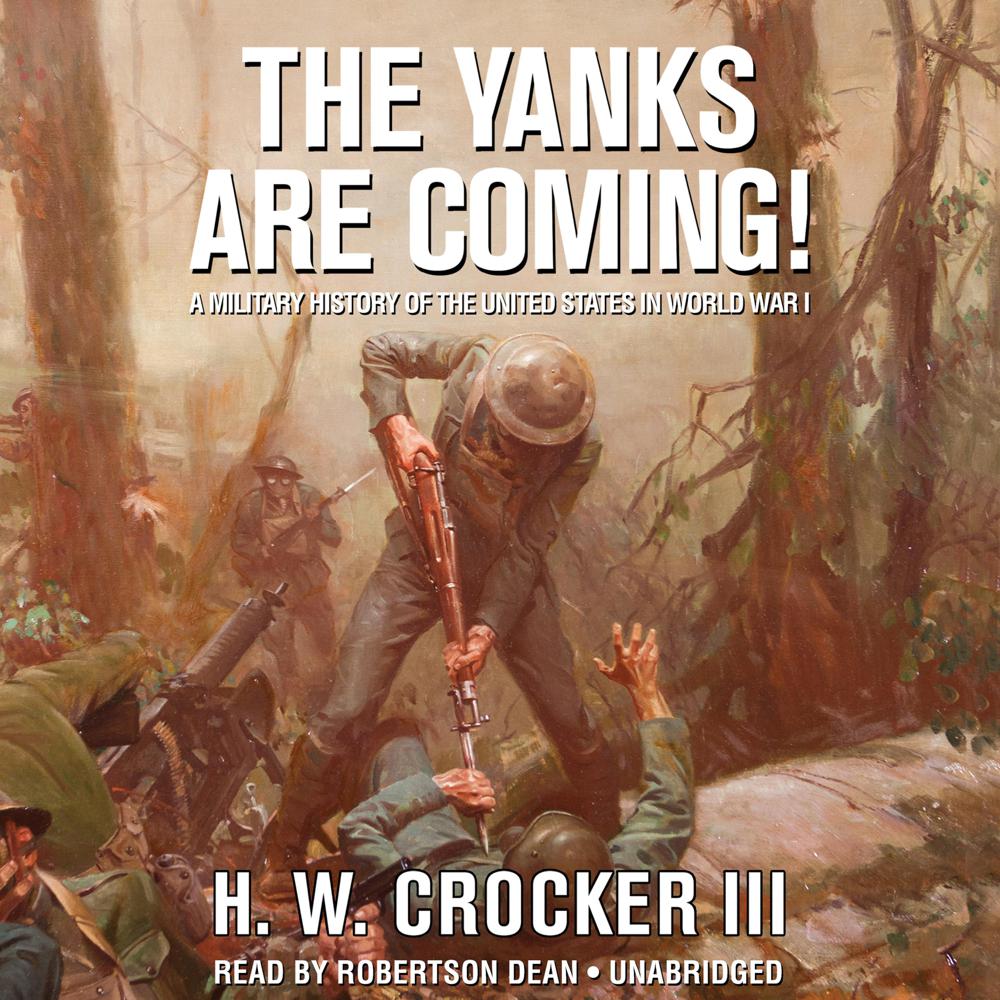 Bestselling military historian H. W. Crocker III turns his guns on the epic story of America's involvement in the First World War with The Yanks Are Coming! A Military History of the United States in World War I.

The year 2014 marks the centenary of the beginning of the Great War, and in Crocker's sweeping, American-focused account, listeners will learn

how George S. Patton, Douglas MacArthur, George C. Marshall (of the Marshall Plan), "Wild Bill" Donovan (future founder of the OSS, the World War II precursor to the CIA), Harry S. Truman, and many other American heroes earned their military spurs in during World War I; why, despite the efforts of the almost absurdly pacifistic administration of Woodrow Wilson, American involvement in the war was inevitable; how the First World War was "the war that made the modern world"—sweeping away most of the crowned heads of Europe, redrawing the map of the Middle East, setting the stage for the rise of communism and fascism; why the First World War marked America's transition from a frontier power—some of our World War I generals had actually fought Indians—to a global superpower, with World War I generals like Douglas MacArthur living to see, and help shape, the nuclear age; about the "Young Lions of the War"—heroes who should not be forgotten, like air ace Eddie Rickenbacker, Sergeant Alvin York (memorably portrayed by Gary Cooper in the Academy Award–winning movie Sergeant York), and all four of Theodore Roosevelt's sons (one of whom was killed).

Stirring and full of brilliantly told stories of men at war, The Yanks Are Coming! will be the essential book for readers interested in rediscovering America's role in the First World War on its hundredth anniversary.

“A rousing military history of an older, and in some ways better, America. The pen portraits of America’s heroes in the First World War—whose fame in many cases extends beyond, like Patton, MacArthur, and Truman—are terrific!”

“Harry Crocker has tackled one of the most perplexing major wars of modern history, untangling the confusion to deliver a narrative that is not only easy to follow, but a joy to read. Unlike so many histories of the Great War, which draw readers into the snarl of the war’s complexity, Crocker’s unwinds the sinews, laying them out in plain sight. It is a rare book that can be truly described as hard to put down. If a person was to read just one book about the Great War, there is no better one than this.”

“A brilliant book. Crocker is the absolute master at creating readable history—and on few subjects is his clarity more needed than on America’s involvement in World War I, helping readers to understand and appreciate our commitment and sacrifice. The Yanks Are Coming! is a great book—highly recommended for anyone interested in American military history.”

“A great story has met a great writer! Historian Harry Crocker skillfully records the important but often overlooked story of America’s pivotal role in winning World War I. Peopled by a fascinating historical cast of characters, The Yanks Are Coming! puts the reader on the front lines with the American doughboys with a you-are-there sense of immediacy. It is a memorable story of American courage and sacrifice, and the author’s insightful, fast-paced narrative enlivens it anew. First-rate!”