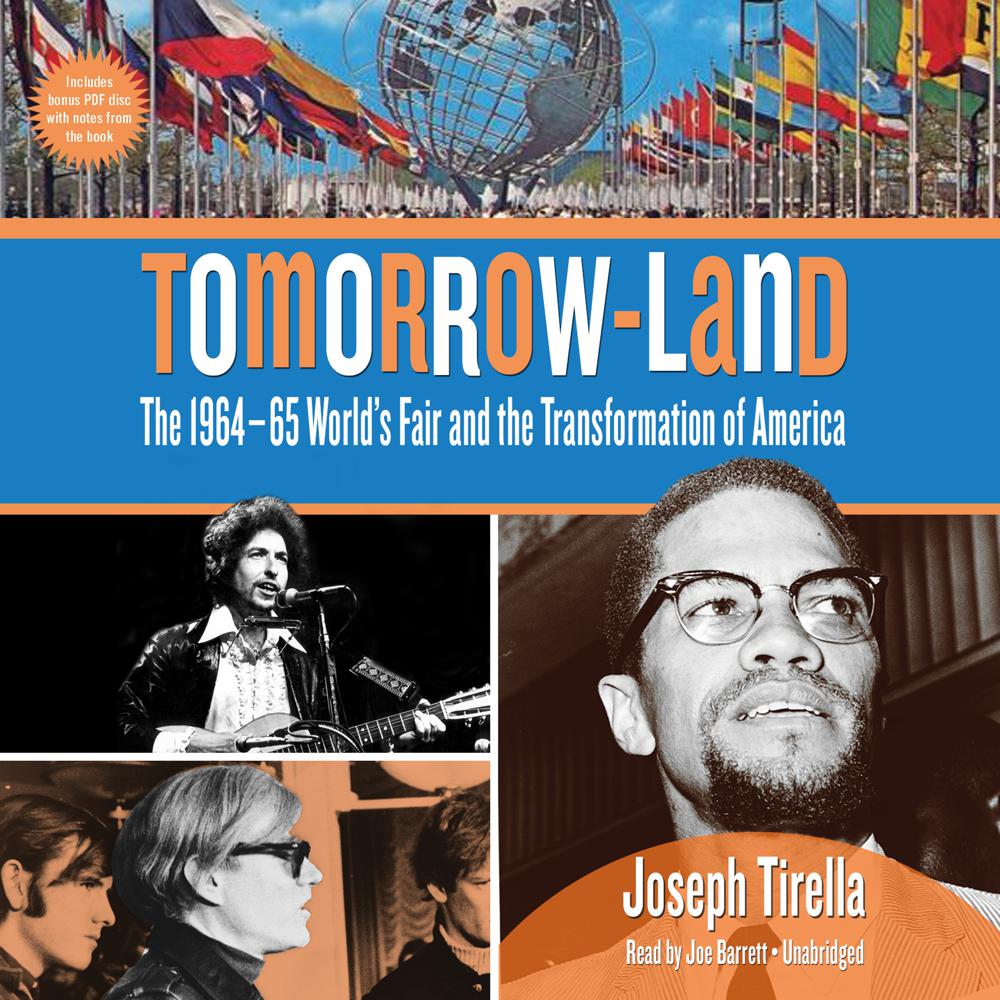 Motivated by the idea of turning Flushing Meadows, literally a land of refuse, into his greatest public park, Robert Moses—New York's "master builder"—brought the World's Fair to the Big Apple for 1964 and '65. Though considered a financial failure, the 1964/65 World's Fair was a sixties flash point in areas from politics to pop culture, technology to urban planning, and civil rights to violent crime.

In an epic narrative, Tomorrow-Land shows the astonishing pivots taken by New York City, America, and the world during the fair. It fetched Disney's empire from California and Michelangelo's La Piet├á from Europe and displayed flickers of innovation from Ford, GM, and NASA—from undersea and outer-space colonies to personal computers. It housed the controversial work of Warhol (until Governor Rockefeller had it removed) and lured Ken Kesey and the Merry Pranksters. Meanwhile, the fair—and its house band, Guy Lombardo and his Royal Canadians—sat in the musical shadows of the Beatles and Bob Dylan, who changed rock and roll right there in Queens. And as southern civil rights efforts turned deadly, and violent protests also occurred in and around the fair, Harlem-based Malcolm X predicted a frightening future of inner-city racial conflict.

“In an interesting and original way, Joseph Tirella has used the storied setting of the 1964/65 World’s Fair in New York to describe the entrepreneurial spirit, the criminal nature, the egalitarian tendencies, and inevitable compromises that characterized a complex and important period in the history of the city and the nation.”

“Tirella explores the contrast between the purported idealism of the 1964 World’s Fair and the conflict and compromise that surrounded the event…The Kennedy assassination, Vietnam, rising urban crime, and racial strife provide the backdrop for Tirella’s detailed history.”

“Tirella’s story flows with a wealth of historical content that reveals how strongly the World’s Fair reflected the times. He covers, for example, the rise of Malcolm X, Bob Dylan, and the Beatles, and how the fair highlighted new inventions, including color TVs and shiny Ford Mustangs. Walt Disney even introduced concepts there that ended up in his nascent Florida theme park, including a ride-around-the-world exhibit filled with tiny singing dolls. Yes, it was a small world, after all.”

“[Tirella] adroitly switches focus from Moses and the fair to external events in the city, nation, and world and back again, following several disparate threads…and never losing control of the narrative’s forward momentum. With a huge cast of characters that includes Walt Disney, Andy Warhol, Muhammad Ali, and the Pope, the World’s Fair provides an excellent perspective on the 1960s in America. Top-notch popular history.”

“This book is filled with fascinating stories about global political contests between the Soviet Union and the United States, domestic protests against social inequality, the politics of massive resistance waged by conservatives of both major parties, corporations playing social-engineering games, America becoming a multicultural nation, and New York City experiencing massive physical change. Joseph Tirella’s Tomorrow-Land takes us back in time fifty years and documents through thorough research and wonderful narrative how the World’s Fair fell short of its goal to promote, ‘Peace through Understanding’ but still managed to give America an accurate vision of its future self.”

“As much a history of mid-sixties America as it is a history of the World’s Fair in Queens, New York, Joseph Tirella’s entertaining and impeccably researched Tomorrow-Land brings the forces and players of that turbulent era crackling to life.”

“With Tomorrow-Land, Joseph Tirella makes a riveting case for Queens, New York, as the origin of all that is great and modern in today’s America. If you’ve ever wondered what Robert Moses, Andy Warhol, and Malcolm X have in common, this book connects the dots and more. Tirella breathes in all the tumult and cultural vertigo surrounding the 1964 World’s Fair and exhales an intoxicating swirl of pure possibility.”