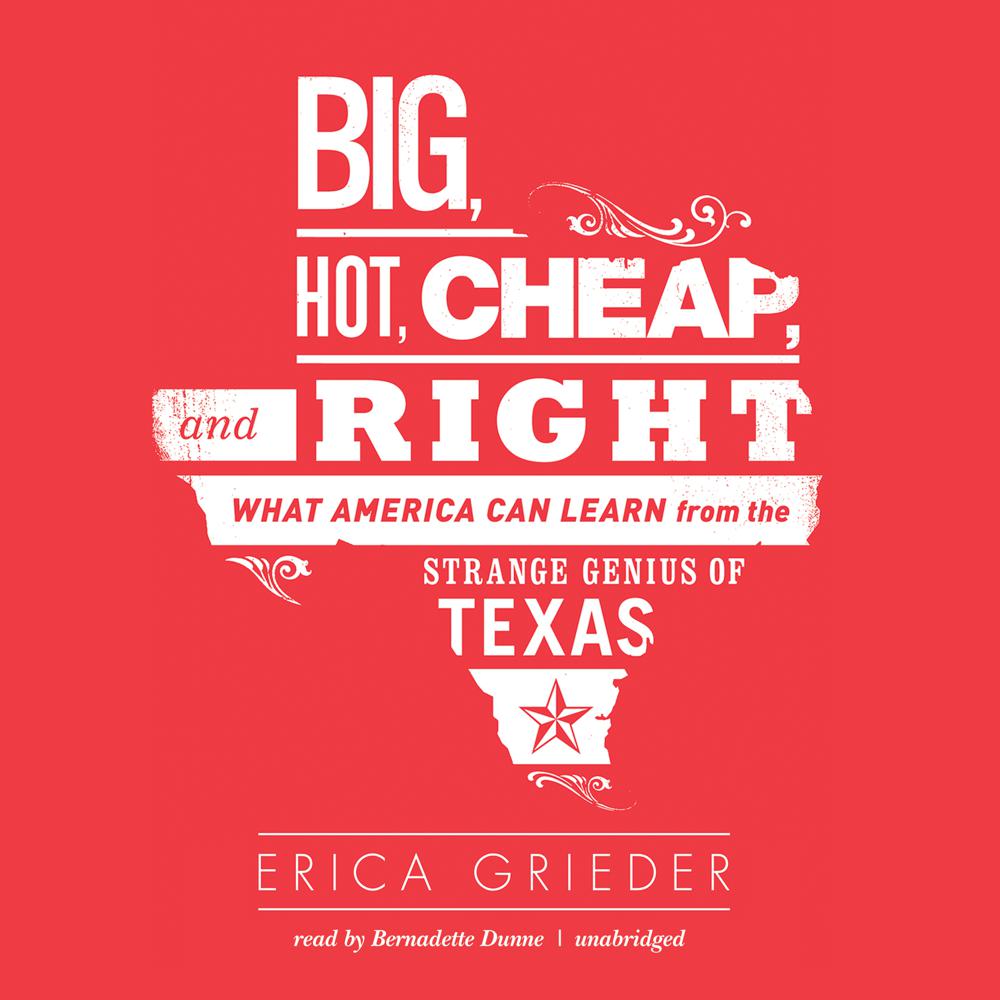 Texas may well be America's most controversial state. Evangelicals dominate the halls of power, millions of its people live in poverty, and its death row is the busiest in the country. Skeptical outsiders have found much to be offended by in the state's politics and attitude, and yet, according to journalist, and Texan, Erica Grieder, the United States has a great deal to learn from Texas.

In Big, Hot, Cheap, and Right, Grieder traces the political history of a state that was always larger than life. From its rowdy beginnings, Texas has combined a long-standing suspicion of government intrusion with a passion for business. Looking to the present, Grieder assesses the unique mix of policies on issues like immigration, debt, taxes, regulation, and energy, which together have sparked a bona fide Texas miracle of job growth. While acknowledging that it still has plenty of twenty-first century problems to face, she finds in Texas a model of governance whose power has been drastically underestimated. Her book is a fascinating exploration of America's underrated powerhouse.

“Refreshing…Ms. Grieder’s is the rare book that takes stock of the Texas model without ridiculing many of its traditions and politicians…This is a good book, and Ms. Grieder’s clear, vivid writing makes it downable in a single afternoon.”

“Erica Grieder supplies a fresh view of the nation’s second most populous state…Mixes equal parts history, political reporting, back-of-the-envelope economics, and cultural commentary. For those who have never enjoyed a plate of Kreuz’s barbecue, toured the Alamo, or attended the annual Sweetwater Rattlesnake Roundup, Ms. Grieder’s thumbnail sketch of Texana will make for an entertaining introduction. But most revealing may be the way she connects the state’s current boom with its unique history…Ms. Grieder’s work is a well-timed plea for the rest of the country to wake up and learn from its example.”

“Readable and often amusing…For those of us who didn’t grow up here and study Texas history, Big, Hot, Cheap, and Right is a brief but perceptive introduction to the state’s colorful past and fascinating characters.”

“Greider delves into Texas’ motley past, looks with humor and insight at where we are today, and makes some interesting predictions about our future…The depth of research, objectivity, and philosophical underpinnings of Greider’s writing make Big, Hot, Cheap, and Right a dang good read for native Texans and for those of us who got here as fast as we could.”

“Pacey, colorful, humorous, and cutting…The book is a commendable achievement. Some people are going to be very annoyed that they didn’t write it…Neither apology nor sonnet, the book’s treatment of Texas is robustly moderate.”

“Thirty years from now there’s a good chance that most of America will look like Texas and somehow, improbably, using some strange dark prose magic, Erica Grieder has managed to convince me that might actually not be so bad. Written with verve and nuance, this is a fascinating, provocative read. If there were a book like this for each state, I’d read every one.”

“Journalist Grieder (a senior editor at Texas Monthly and former Southwest correspondent for the Economist) pens a primer on Texas that is serious and lighthearted in turn…Anyone curious about or proud of Texas will find something of interest, as will readers of current politics.”

“Due to the fact that Texas is thriving while much of America struggles, it might be wise to consider what Texas is doing right.”

“Texas isn’t the uninhabitable right-wing bully East Coast howlers imagine and it’s not the open range paradise described by free-market myth-makers. Erica Grieder describes the state as it is—a place shaped (and misshapen) by its past and by the entirely human characters who live there. She is a sure-footed guide, pointing out what is to be admired and warning when we had best watch our step.”