Learning to Eat Soup with a Knife
John A. Nagl 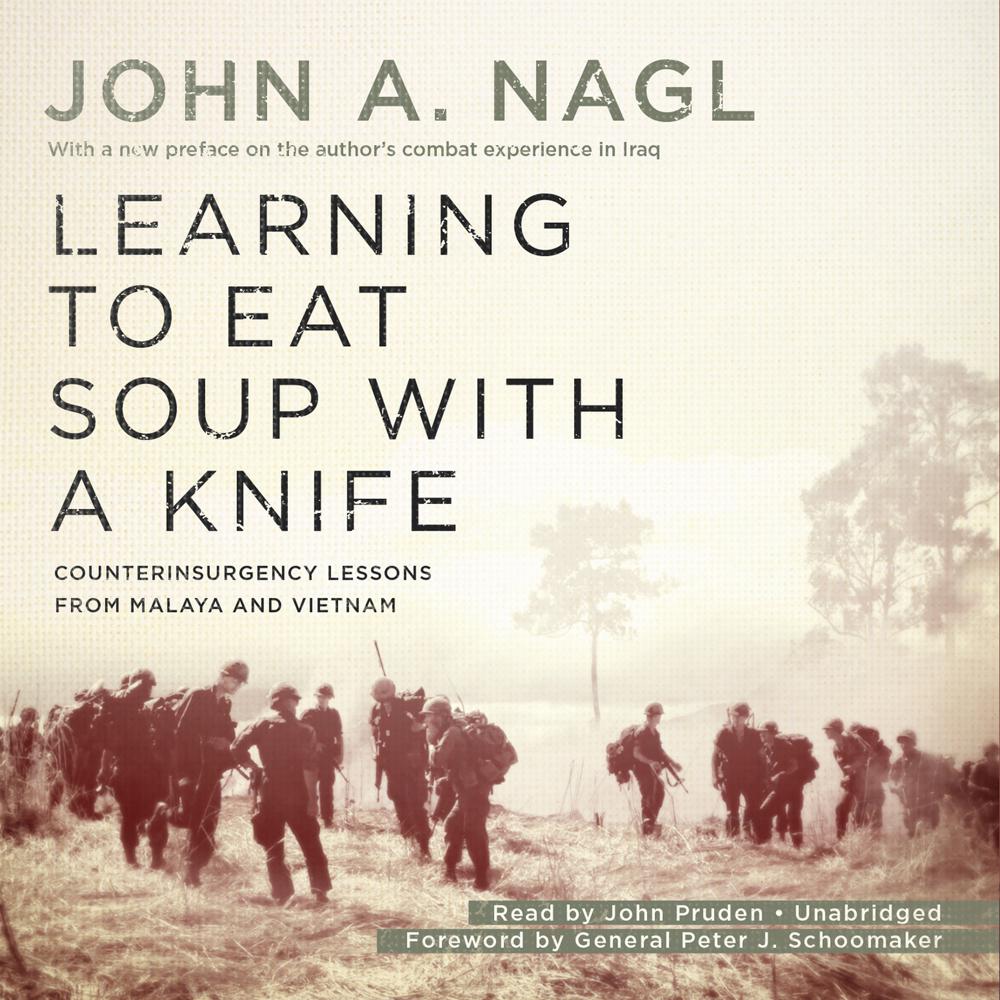 Invariably, armies are accused of preparing to fight the previous war. In Learning to Eat Soup with a Knife, Lieutenant Colonel John A. Nagl—a veteran of both Operation Desert Storm and the conflict in Iraq—considers the now crucial question of how armies adapt to changing circumstances during the course of conflicts for which they are initially unprepared. Through the use of archival sources and interviews with participants in both engagements, Nagl compares the development of counterinsurgency doctrine and practice in the Malayan Emergency from 1948 to 1960 with what developed in the Vietnam War from 1950 to 1975. In examining these two events, Nagl argues that organizational culture is key to the ability to learn from unanticipated conditions, a variable which explains why the British army successfully conducted counterinsurgency in Malaya and why the American army failed to do so in Vietnam, treating the war instead as a conventional conflict. Nagl concludes that the British army, because of its role as a colonial police force and the organizational characteristics created by its history and national culture, was better able to quickly learn and apply the lessons of counterinsurgency during the course of the Malayan Emergency. With a new preface reflecting on the author’s combat experience in Iraq, Learning to Eat Soup with a Knife is a timely examination of the lessons of previous counterinsurgency campaigns that will be hailed by both military leaders and interested civilians.

“Colonel Nagl’s book is one of a half dozen Vietnam histories—most of them highly critical of the US military in Vietnam—that are changing the military’s views on how to fight guerrilla wars…The tome has already had an influence on the ground in Iraq.”

“The success of DPhil papers by Oxford students is usually gauged by the amount of dust they gather on library shelves. But there is one that is so influential that General George Casey, the US commander in Iraq, is said to carry it with him everywhere. Most of his staff have been ordered to read it, and he pressed a copy into the hands of Donald Rumsfeld when he visited Baghdad in December. Learning to Eat Soup with a Knife (a title taken from T. E. Lawrence—himself no slouch in guerrilla warfare) is a study of how the British Army succeeded in snuffing out the Malayan insurgency between 1948 and 1960—and why the Americans failed in Vietnam…It is helping to transform the American military in the face of its greatest test since Vietnam.”

“It’s past time to make Learning to Eat Soup with a Knife required reading at the White House.”

“The capacity to adapt is always a key contributor to military success. Nagl combines historical analysis with a comprehensive examination of organizational theory to rationalize why, as many of his readers will already intuitively sense, ‘military organizations often demonstrate remarkable resistance to doctrinal change’ and fail to be as adaptive as required. His analysis is helpful in determining why the US Army can appear so innovative in certain respects and yet paradoxically slow to adapt in others.”

“Of the different books produced on this subject, Lieutenant Colonel John Nagl’s Learning to Eat Soup with a Knife is an absolute must for those who want to gain valuable insight on some of the hard lessons of fighting an insurgency before actually getting on the ground. The book expertly combines theoretical foundations of insurgencies with detailed historical lessons of Malaya and Vietnam to produce some very profound and topical implications for current military operations. The true success of the book is that Nagl discusses all of these complex issues in an easy-to-follow and straightforward manner…I read this book upon returning from my tour in Iraq after commanding a company on the ground for a year. I was amazed at how insightful and ‘true’ the conclusions were and wished that I had read it before I deployed.”

“An extremely relevant text. Those interested in understanding the difficulties faced by Coalition forces in Iraq and Afghanistan, or who want to grasp the intricacies of the most likely form of conflict for the near future, will gain applicable lessons. [Learning to Eat Soup with a Knife] offers insights about how to mold America’s armed forces into modern learning organizations. As the Pentagon ponders its future in the Quadrennial Defense Review, one can only hope that Nagl’s invaluable lesson in learning and adapting is being exploited.”