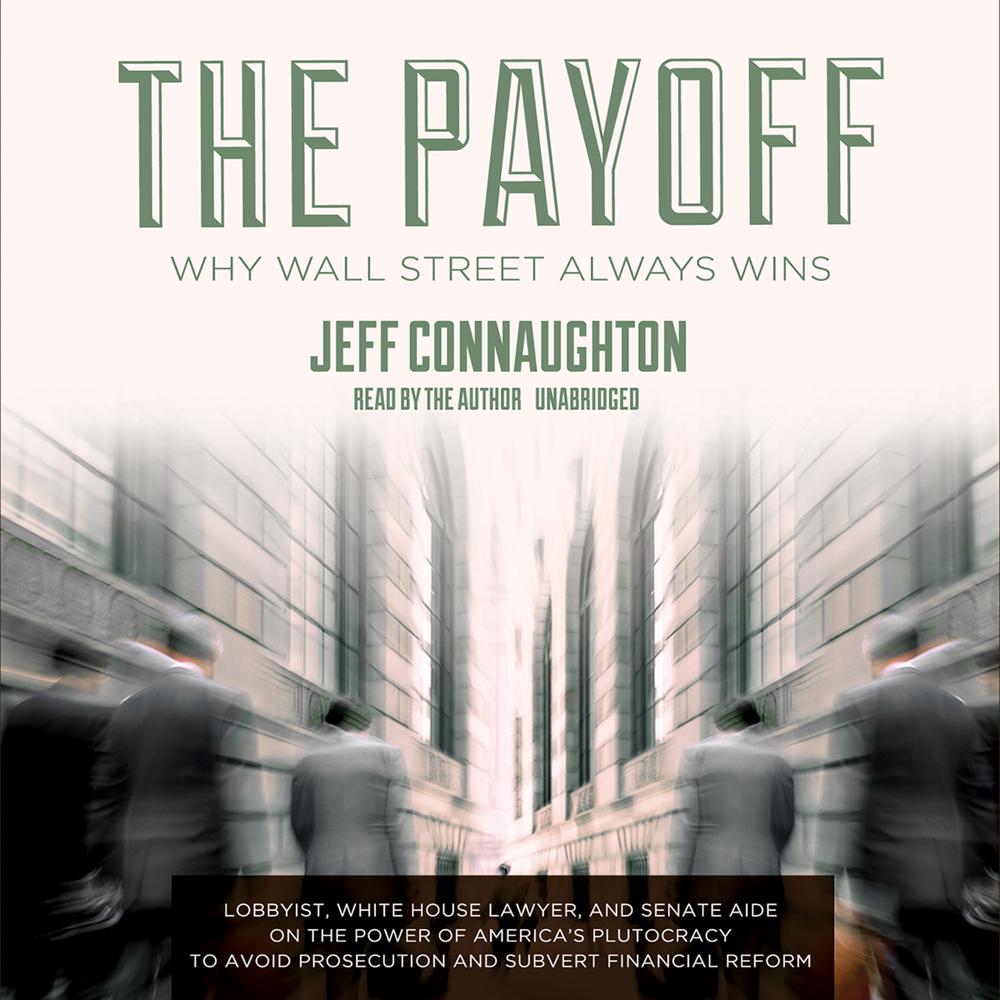 Beginning in January 2009, The Payoff lays bare Washington's culture of power and plutocracy. It's the story of the twenty-month struggle by Senator Ted Kaufman and Jeff Connaughton, his chief of staff, to hold Wall Street executives accountable for securities fraud, stop stock manipulation by high-frequency traders, and break up too-big-to-fail megabanks. This book takes us inside their dogged crusade against institutional inertia and industry influence as they encounter an outright reluctance by the Obama administration, the Justice Department, and the Securities and Exchange Commission to treat Wall Street crimes with the gravity they deserve. On financial reforms, Connaughton criticizes Democrats for relying on the very Wall Street technocrats who had failed to prevent the crisis and Republicans for staunchly opposing real reforms, primarily to enjoy a golden opportunity to siphon fundraising dollars from the Wall Street executives who had raised millions to elect Barack Obama president.

Connaughton, a former lawyer in the Clinton White House, illuminates the pivotal moments and key decisions in the fight for financial reform that have gone largely unreported. His arch, nonpartisan account chronicles the reasons why Wall Street's worst offenses were left unpunished—and why it's likely that the 2008 debacle will happen again.

“A compelling account of how the financial lobby works.”

“If you feel like justice was thwarted during the financial crisis, if you feel like the market’s been rigged for the insiders and there’s no check on it, you’ve got an ally in Jeff Connaughton…An insider’s guide to what’s gone wrong in Washington, by somebody who made millions as a professional insider.”

“The great mystery story in American politics these days is why, over the course of two presidential administrations (one from each party), there’s been no serious federal criminal investigation of Wall Street during a period of what appears to be epic corruption. People on the outside have speculated and come up with dozens of possible reasons, some plausible, some tending toward the conspiratorial—but there have been very few who’ve come at the issue from the inside. We get one of those rare inside accounts in The Payoff: Why Wall Street Always Wins…[from] one of the few voices on the Hill who always talked about the subject with appropriate alarm.”

“Jeff Connaughton has a new job: truth teller. The Payoff: Why Wall Street Always Wins is a memoir and more…A must read if you’re interested in the corrupting influence of lobbyists, the revolving door between Wall Street and those that govern and regulate the financial services industry, and how huge, and ultimately untraceable, amounts of money grease the wheels of government at every step…Full of revealing quotes and anecdotes that describe a messy, self-serving, and sometimes ruthless political process.”

“A new powerful voice who knows how big banks really work and who is willing to tell the truth in great and convincing detail…A page-turning memoir that is also a damning critique of how Wall Street operates, the political capture of Washington, and our collective failure to reform finance in the past four years. The Payoff: Why Wall Street Always Wins is the perfect antidote to disinformation put about by global megabanks and their friends.”

“This is the most honest book I’ve read about Washington in years. It really tells it like it is.”

“Anyone interested in how Washington works will find The Payoff impossible to put down.”

“Those interested in understanding the mindset of the people who should be leading the anticorruption charge ought to read this book…It’s scary and definitely worth a read.”