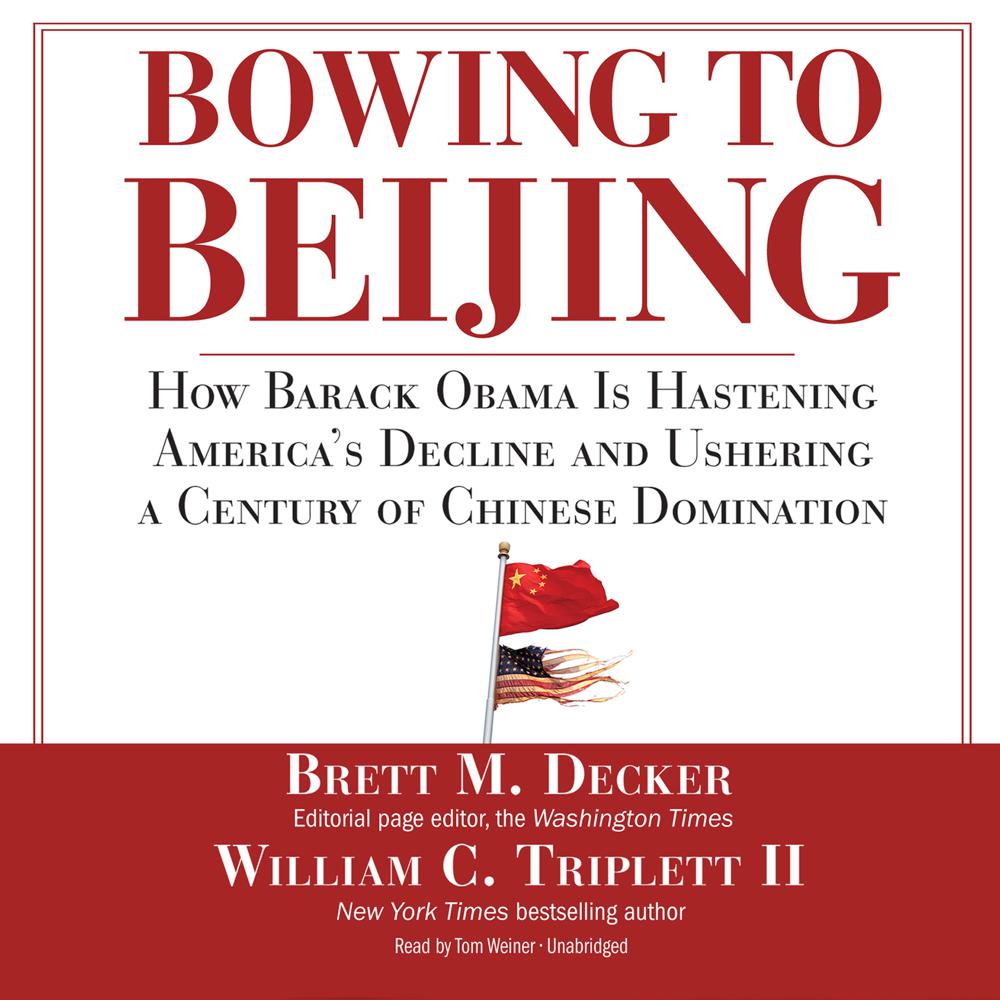 Communist China is lying, cheating, and stealing its way into becoming a global superpower. And what's worse, President Obama is not only letting this happen but helping China do so. So argues bestselling author William Triplett II and Washington Times editor Brett M. Decker in their shocking book, Bowing to Beijing. Here, Triplett and Decker reveal how China's rapid rise directly correlates with America's decline—and the dangerous consequences this trend holds for us here and abroad. Exposing how China is unabashedly threatening and shaming us militarily, economically, politically, Bowing to Beijing is an all-encompassing look at

–China's destruction of traditional American industries at home, including how they're punishing American firms abroad, buying our assets (sometimes in secret), and flooding American homes with dangerous products;

–China's far-reaching espionage tactics, including extortion and subversion of the American political system as well as penetration of colleges and universities;

–China's strategic military buildup and weapons smuggling to rogue nations such as North Korea; and

Our "win-win" relationship with China—in which Obama appeases China so they win twice while we lose—is crippling us and is detrimental to our future. America must respond and stop China's power grab if we want to preserve our standard of living, our global influence, and our freedom. In Bowing to Beijing, Decker and Triplett show us how.

“My Motown soul brother Brett Decker and Wild Bill Triplett take aim at communist China and hit the red dragon square between the eyes. Patriotic Americans need to read about the growing Chinese threat in Bowing to Beijing.”

“These searing revelations will have you calling for impeachment.”

“To understand what China’s unprecedented rapid modernization and expansion of its military forces mean in terms of its clear objective to achieve regional supremacy in the western Pacific and beyond, Bowing to Beijing is an absolute must-read. Brett M. Decker and Bill Triplett make clear that regardless of the vast economic relations between China and the US, unless we maintain our military deterrence capability, a serious confrontation looms just over the horizon.”

“China’s military buildup is a reality the United States must deal with and not just today, but well into the future. Conventional weapons systems, cruise and ballistic missiles, blue-water naval forces, and nuclear weapons are all part of Beijing’s aggressive plan. Brett M. Decker and Bill Triplett have written a compelling analysis of China’s plans and programs, and lay out a comprehensive and persuasive proposal for America’s response. Policy-makers must read this book.”