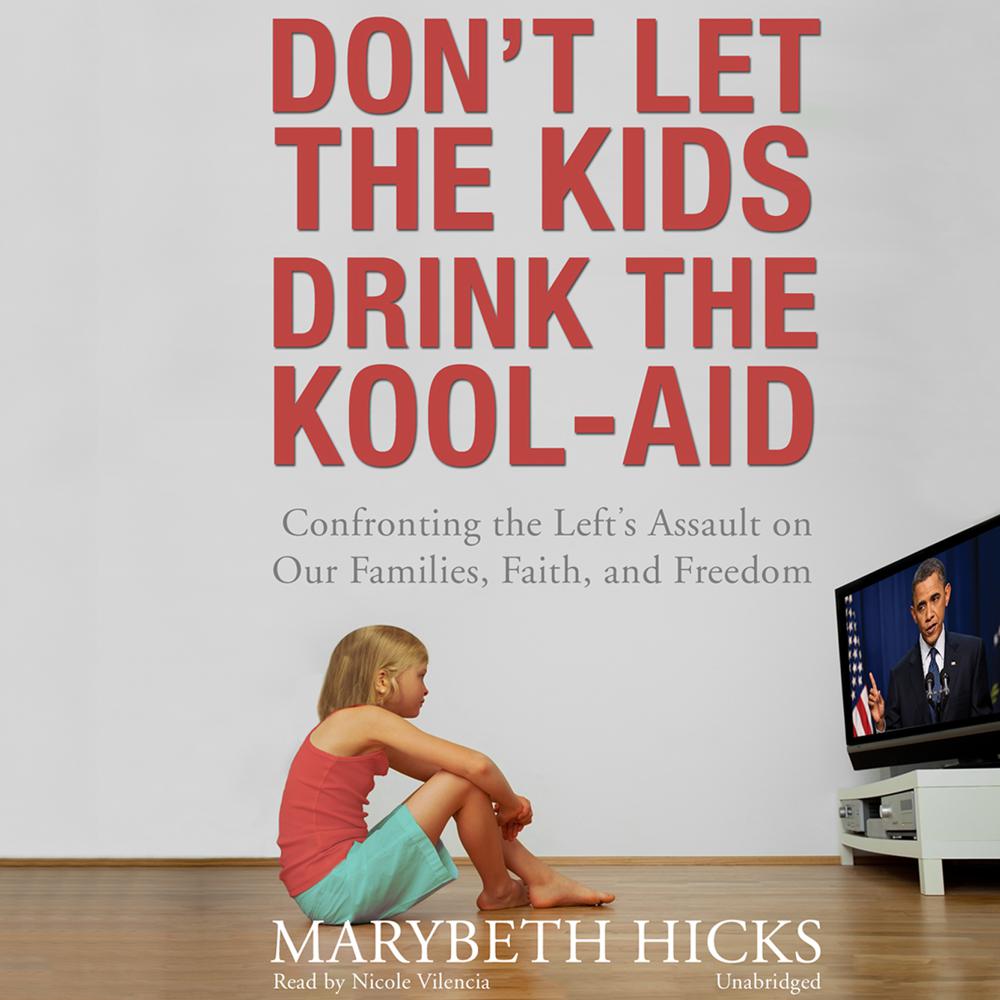 Liberals always think they know best. Yet never before has the Left been so determined to brainwash our kids, says Washington Times columnist Marybeth Hicks in Don’t Let Your Kids Drink the Kool-Aid. Whether it’s through schools, the media, or so-called parenting experts, this book exposes the myriad ways liberals are indoctrinating tomorrow’s voters and the next generation of leaders into a socialist worldview. By destroying our children’s ambitions, work ethic, optimism, and faith, liberals are creating a generation of citizens who believe they are entitled to a lifetime of government care. The inevitable result? A society that will succumb to a system that robs them of liberty and prosperity in the name of social order. Revealing shocking stories and offering bold solutions, Hicks calls on all Americans to stand up to the Left and refuse to let them ruin our children.

“This is a tremendously important and timely book about the greatest disaster that could befall our country. No, it’s not economic—as bad as the economy is—it’s cultural, with a generation growing up utterly divorced from traditional American ideals. As Marybeth says, if we want to perpetuate America we need Americans, but our culture is rapidly undermining our children’s commitment to faith and freedom. Reading Marybeth Hicks’s Don’t Let the Kids Drink the Kool-Aid might be the most patriotic thing you do this year. If you care you about this country, please buy it, please read it, and please spread the word.”

“Fellow moms and dads: It’s time to unite and reclaim the hearts, minds, and souls of our children from socialist indoctrinators! In shocking detail and with investigative zeal, Marybeth Hicks exposes the Left’s cradle-to-grave campaign to undermine religion, the traditional family, and free market capitalism. The best defense against this corrosive culture of entitlement and grievance is a good offense. Don’t Let the Kids Drink the Kool-Aid provides an invaluable playbook for parents who reject the Nanny State.”

“As important as it is to win the political battles, as Marybeth Hicks shows in her stunning new book Don’t Let the Kids Drink the Kool-Aid, if we don’t win the cultural battle for our children’s minds and hearts, we’ll have no future at all. Too many of us dismiss the propaganda of the liberal media, the public schools, and popular culture as harmless, but as Marybeth shows, it has demonstrably changed the way the next generation of Americans is thinking. Buy this book, be warned, and better yet—follow my friend Marybeth’s advice and take action.”

“An invaluable playbook for parents who reject the Nanny State.”