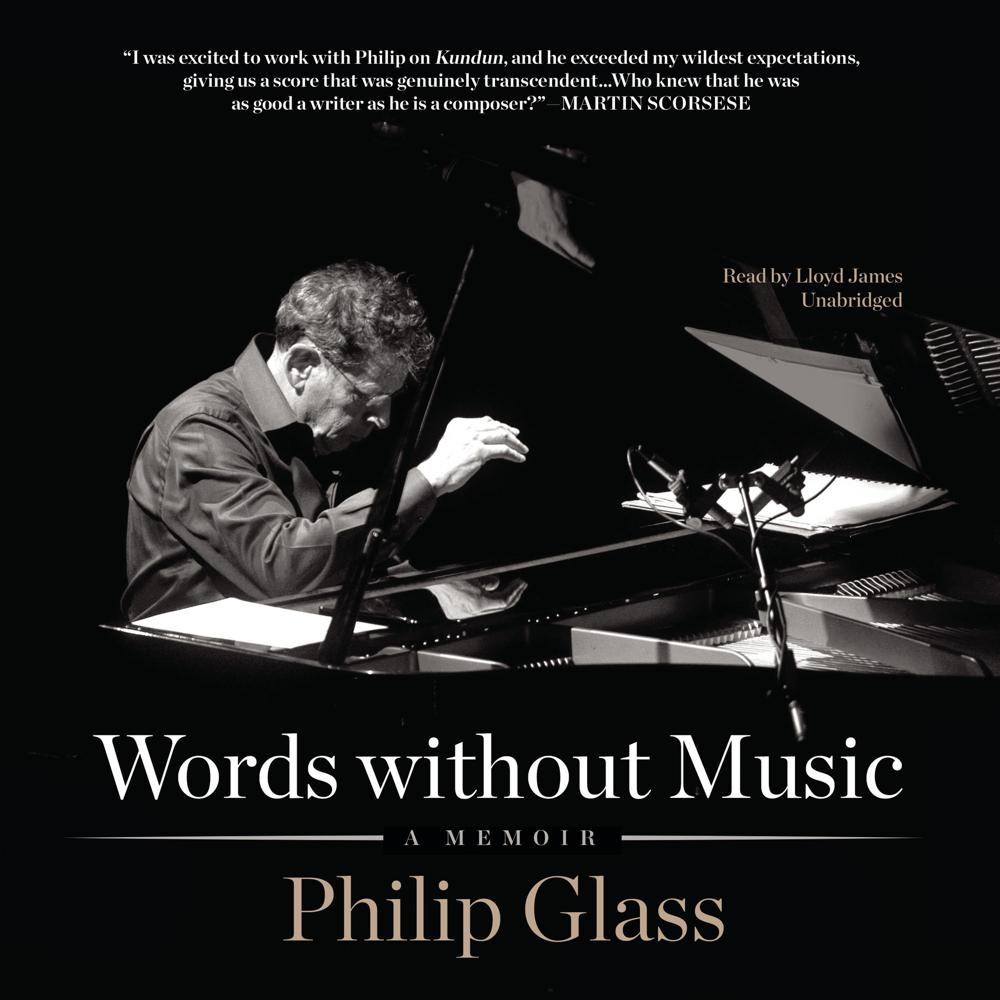 World-renowned composer of symphonies, operas, and film scores, Philip Glass has almost single-handedly crafted the dominant sound of late twentieth-century classical music. In Words without Music, he creates an entirely new and unexpected voice: that of a born storyteller and insightful chronicler, whose behind-the-scenes recollections allow one to experience the moments of creative fusion when life magically merges with art.

The transformation of a young man from budding musical prodigy to world-renowned composer is the story of this commanding memoir. From his childhood in post–World War II Baltimore to his student days in Chicago, at Juilliard, and his first journey to Paris, where he studied under the formidable Nadia Boulanger, Glass recalls his early mentors, while reconstructing the places that shaped his artistic consciousness. From a life-changing trip to India, where he met with gurus, to the gritty streets of New York in the 1970s, where he worked day jobs as a furniture mover, cabbie, and unlicensed plumber, Glass leads the life of a Parisian bohemian artist transported to twentieth-century America.

Even after Glass' talent was first widely recognized with the sensational premiere of Einstein on the Beach in 1976, he never abandoned his ideals throughout his collaborations with such artists as Allen Ginsberg, Ravi Shankar, Robert Wilson, Doris Lessing, and Martin Scorsese. And in this loving and slyly humorous autobiography, Philip Glass re-creates in words the thrill that results from artistic creation, ultimately affirming the power of music to change the world.

“[A] warm, low-key, and often delightful new memoir… Like his music, his prose is made up of simple components—plain, honest sentences that work their magic cumulatively.”

“Glass is one of the most articulate composers around. Insight and practical common sense pervade his new book…With a composer’s sense of form, Glass returns, in the final pages, to his youth, the subject that elicits his most evocative writing.”

“Essential reading for anyone remotely interested in the evolution of the avant-garde during the past half-century…An important contribution to cultural history.”

“Well supplied with droll observations and plainspoken assessments regarding the details of a career that has been as remarkable and noteworthy as any in American music―indeed, in American culture.”

“Aspiring musicians and artists will learn much from Glass, as will general readers, musical or not, who will discover an artistic life exceptionally well lived.”

“Glass is raptly alive to the aesthetic epiphanies, philosophy, spirituality, and magnetic personalities he has encountered, yet his prose is conversational and free of pretense. The result is a lively, absorbing read that makes Glass’ rarefied cultural sphere wonderfully accessible.”

“Writing with warmth and candor, Glass portrays himself as driven, self-confident, and tenaciously determined to invent his own, radically new musical language.”

“I came to Philip Glass’ music very simply, without any critical prodding or guidance. I listened and was transfixed. I was excited to work with Philip on Kundun, and he exceeded my wildest expectations, giving us a score that was genuinely transcendent. He’s exceeded my expectations again with this rich and beautifully written memoir. Who knew that he was as good a writer as he is a composer?”

“Philip Glass has written a fascinating account of his life with recollections of family, teachers, and friends. Words without Music will be a pleasure to read, not only for musicians (although they will particularly enjoy it) but for anyone interested in the world of art.”

“Words without Music is one of the most inspiring books I’ve ever read. The book overflows with love and enthusiasm for life and art. Philip Glass’ vision of human culture as the transmission of ideas through time is transcendent. Hilarious, touching, and profound, this book should be read by everyone interested in music and great writing.”

“An appealing memoir from one of the foremost creative geniuses of the last fifty years, Philip Glass’ homespun reminiscences are as accessible as his entrancing musical compositions. In his epic quest to discover ‘where the music comes from,’ Glass chronicles his transformative, lifelong journey across four continents, including his musical epiphany with Ravi Shankar, which had a dramatic impact on contemporary instrumental music and opera.”