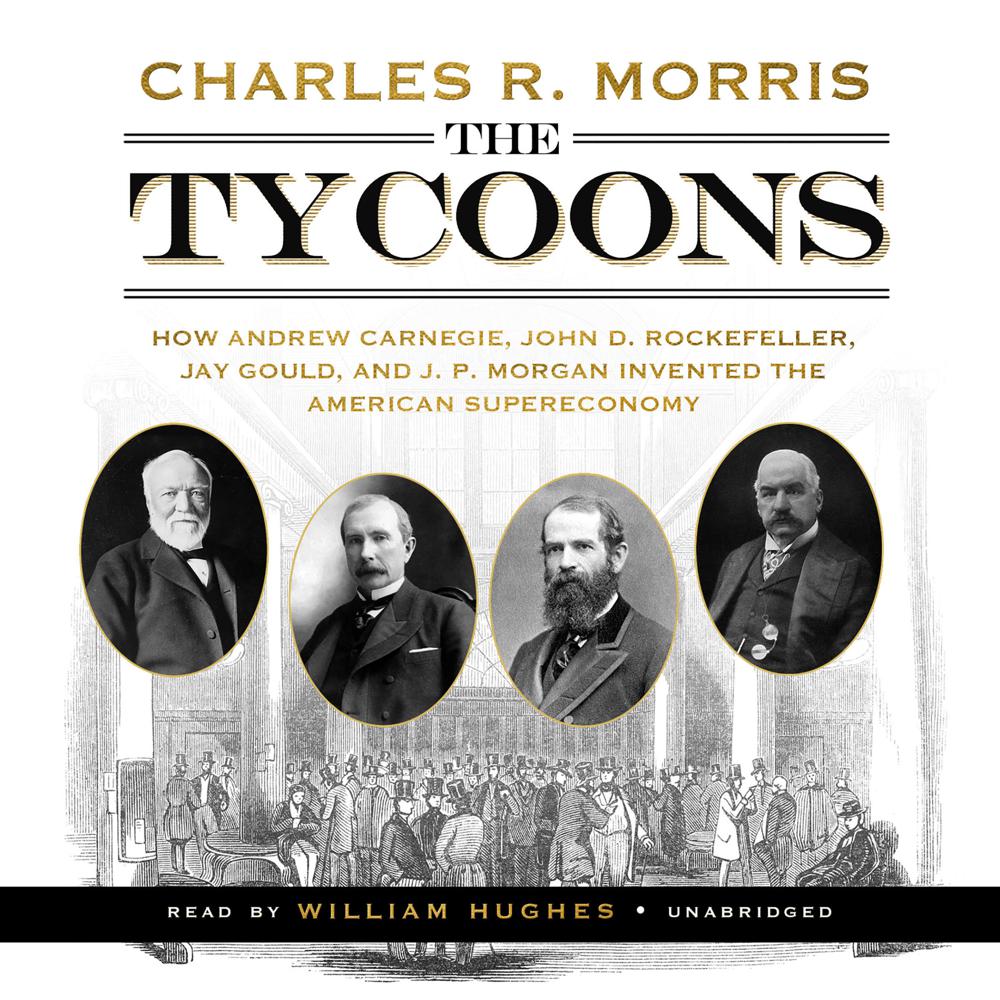 The modern American economy was the creation of four men: Andrew Carnegie, John D. Rockefeller, Jay Gould, and J. P. Morgan. They were the giants of the Gilded Age, a moment of riotous growth that established America as the richest, most inventive, and most productive country on the planet.

Acclaimed author Charles R. Morris vividly brings these men and their times to life. The ruthlessly competitive Carnegie, the imperial Rockefeller, and the provocateur Gould were obsessed with progress, experiment, and speed. They were balanced by Morgan, the gentleman businessman, who fought, instead, for a global trust in American business. Through their antagonism and verve, they built an industrial behemoth—and a country of middle-class consumers. The Tycoons tells the incredible story of how these four determined men wrenched the economy into the modern age, inventing a nation of full economic participation that could not have been imagined only a few decades earlier.

“Morris displays a cultural diarist’s careful attention to detail that makes a reader feel like a time traveler plopped down among men who were by turns vicious and visionary.”

“Superb…Gracefully and eloquently clarifies these men’s frequently misunderstood roles in the shaping of modern US commerce.”

“Following the end of the Civil War, American per capita production and consumption grew rapidly, the population soared, and the US economy surged past Great Britain’s—a radical transformation that Morris chronicles through the lives of four protagonists…More an economic argument than an exposition of history or biography, Morris’ volume analyzes long-term historical trends and their influence on modern affairs. The result is a fascinating revisionist interpretation in which Gould and Rockefeller come off better than conventional wisdom suggests, and Carnegie and Morgan worse. Readers…will be intrigued by his original angle on the robber barons.”

“An excellent picture of the growth of American business that made the United States an economic powerhouse.”

“Morris profiles the four big ‘robber barons’ of post-Civil War America…Although all four would probably have excelled in any era, it was the machine age, the move from an agricultural to a manufacturing society, and the concurrent rise of mass consumption, that created an environment for their megasuccess. Morris shows how the inventiveness and spirit of the American worker in the later 1800s led to a surge of growth that had the United States roaring past Great Britain to become the world’s top producer. ‘Scientific management’ of factories created interchangeable parts and assembly lines, bringing branded foods and labor-saving home appliances to the people. Morris brings home how the rapid expansion produced a ‘supply shock’ that overshadows any so-called paradigm shift that we may be experiencing today.”