Disturbed in Their Nests
Alephonsion Deng, Judy A. Bernstein 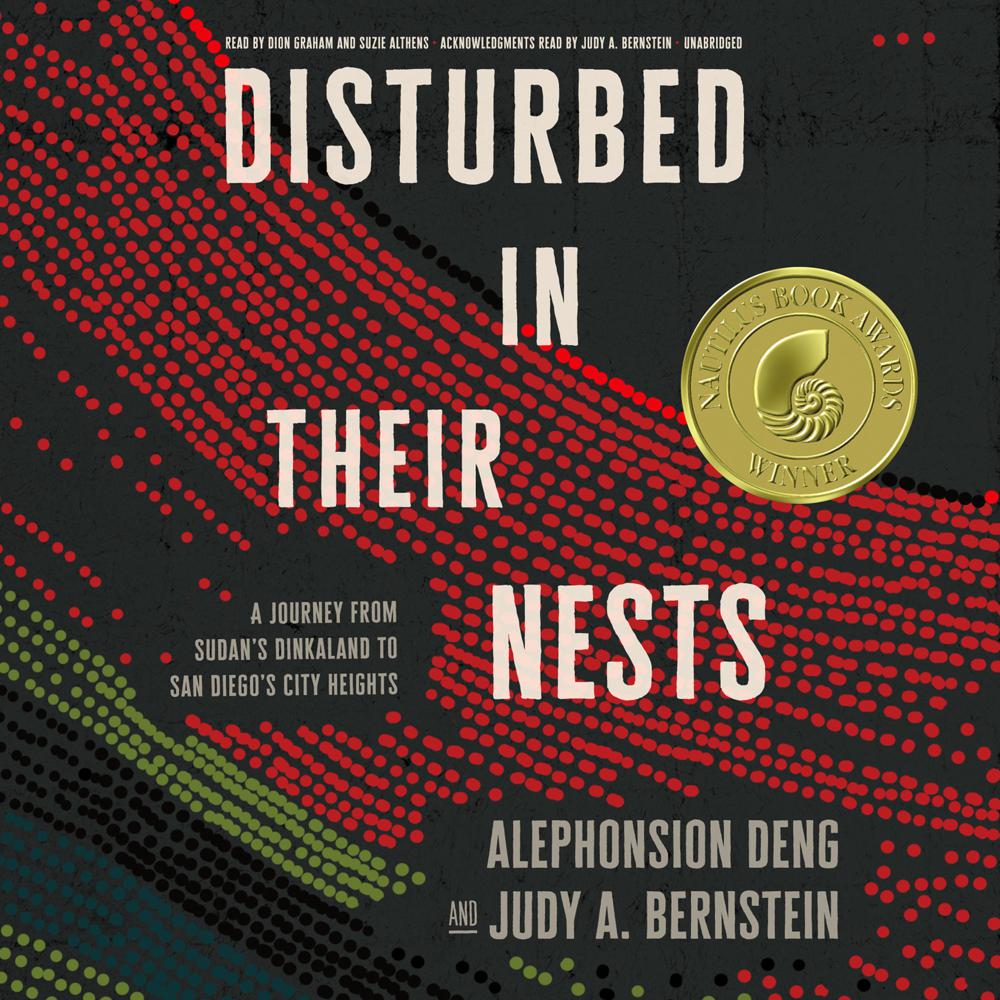 Nineteen-year-old refugee Alephonsion Deng, from war-ravaged Sudan, had great expectations when he arrived in America three weeks before two planes crashed into the World Trade Towers. Money, he’d been told, was given to you in pillows. Machines did all the work. Education was free.

Suburban mom Judy Bernstein had her own assumptions. The teenaged “Lost Boys of Sudan”—who’d traveled barefoot and starving for a thousand miles—needed a little mothering and a change of scenery: a trip to the zoo, perhaps, or maybe the beach.

Partnered through a mentoring program in San Diego, these two individuals from opposite sides of the world began an eye-opening journey that radically altered each other’s vision and life.

Disturbed in Their Nests recounts the first year of this heartwarming partnership; the initial misunderstandings, the growing trust, and, ultimately, their lasting friendship. Their contrasting points of view provide of-the-moment insight into what refugees face when torn from their own cultures and thrust into entirely foreign ones.

Alepho struggles to understand the fast-paced, supersized way of life in America. He lands a job, but later is viciously beaten. Will he ever escape violence and hatred?

Judy faces her own struggles: Alepho and his fellow refugees need jobs, education, housing, and health care. Why does she feel so compelled and how much support should she provide?

The migrant crises in the Middle East, Central America, Europe, and Africa have put refugees in the headlines. Countless human tragedies are reduced to mere numbers. Personal stories such as Alepho’s add a face to the news and lead to greater understanding of the strangers among us. Readers experience Alepho’s discomfort, fears, and triumphs in a way that a newscast can’t convey. This timely and inspiring personal account will make readers laugh, cry, and examine their own place in the world.

“The inspirational story of coauthors Alephonsion Deng and Judy A. Bernstein, who…resolve their initial misunderstandings and develop a lasting friendship while changing each other’s vision and life.”

“Narrators Dion Graham and Suzie Althens perfectly capture their characters. Fans of Deng and Bernstein’s previous work, the story of the Lost Boys, and of refugees and their incredible courage and willingness to embrace a new culture will find much to ponder.”

“[As] Deng, his brother, Benson, and his cousins, Lino and Benjamin, tried to adjust to life in San Diego…the city’s strange, sometimes threatening inhabitants presented their own challenges…The book brims with stories of the boys’ bumpy adjustment…A memoir that will bring comfort to those enduring similar challenges, the book’s stories will be instructive to those committed to improving the quality of immigrants’ lives.”

“In a follow-up to their previous collaboration, They Poured Fire on Us from the Sky (2005), Deng and Bernstein alternate telling the story of their mentoring relationship, narrating the same events from different perspectives, in an eye-opening and richly layered account.”

“A ‘lost boy’ of Sudan and a California housewife forge a bond in this compelling dual memoir…An important reminder of all we share as human beings…This book represents the beginning—or a necessary reset—of an essential dialogue.”

“Disturbed in Their Nests is a strikingly original work that opens a broader conversation on the momentous issues of our time: war, conflict, migration, refugees, relocation, and adjustments in new spaces, all in the context of national and global politics wrapped in a fog of confusion. The captivating stories create eyebrow-raising reflections on the nature of suffering, humane obligations to assist one another, sentiments on the weakest members of our collective humanity, the pain and anguish of survival, the redemptive power of fresh imaginations about oneself, shining positive light on otherness, the impactful moral lifeways that define memory, and the clever navigation of the long pathways from localism to cosmopolitanism that speaks to the richness and transformative capacity of social relationships.”

“At a time when our immigration and refugee programs are under siege, Disturbed in Their Nests is a welcome breath of reality. The book poignantly chronicles the plight of refugees fleeing their homeland, their struggles adapting to their new country, and their triumphs in becoming New Americans!”

“This book is a double story of survival. Alepho Deng was just a boy when he walked across Africa, surviving hunger, thirst, cruelty, and raging war. As this remarkable book begins, Alepho arrives in San Diego and meets Judy Bernstein, an American writer and volunteer, who guides him through the complex terrain of an American city. With Bernstein’s help, Deng is able to survive and even thrive in his new country. Beautifully crafted in their two voices, Disturbed in Their Nests shows what happens when different cultures meet—Dinka and California—and how there are myriad ways for cultural misunderstandings—from food, language, and all the objects of daily living.”

“Disturbed in Their Nests offers evidence that all of us are always one decision or moment away from a totally different life. Judy and Alepho’s experiences illustrate how to overcome fear of the unknown and to engage in relationships that foster respect for our common humanity.”

“There are basically two opposing ways for citizens of the rich nations to respond to the refugee crisis. One is to cringe in fear, lashing out at the new arrivals, bombarding them with abuse and threats. The other way is to adopt the ancient principles of hospitality, welcoming the victims and learning from them. The writers of Disturbed in Their Nests show that taking this humanitarian option is neither easy nor straightforward; the meeting of two alien cultures can be experienced as a clash and a challenge. However, the fundamental message of the book is that the mutual struggle for understanding by the new and the old bestows profound benefits on both parties. In the end, the virtuous course turns out also to be the most profitable.”