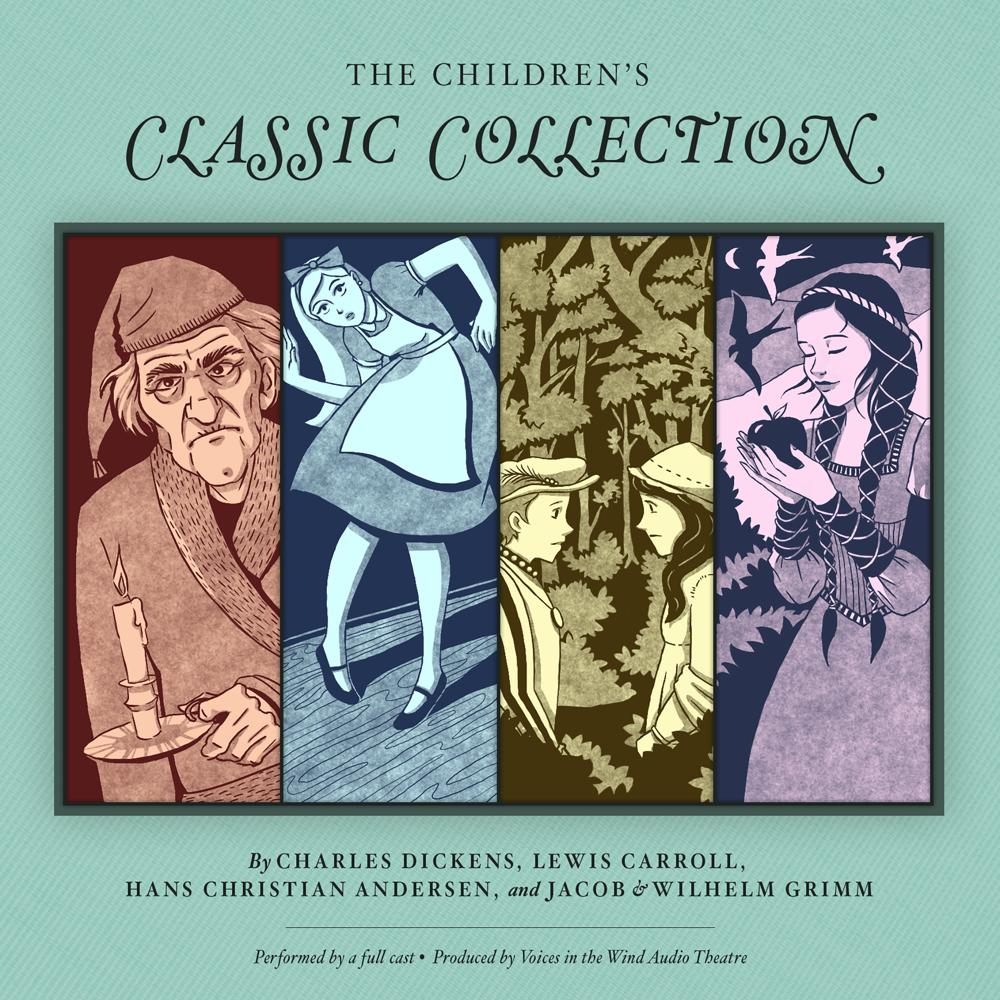 This delightful collection of children’s stories is perfect listening for the whole family. Featured are four beloved stories to entice your imagination, including A Christmas Carol by Charles Dickens, Alice in Wonderland by Lewis Carroll, The Bell by Hans Christian Andersen, and Snow White by Jacob and Wilhelm Grimm.

Each story is performed by a full cast of voice actors with sound effects and music.

“Zarr and Dupuis’ production for the Canada-based Voices in the Wind Audio Theatre was notable for its lack of sentimentality: despite the happy ending, they emphasized the significance of Christmas as the time of year when individuals should take a long hard look at themselves and consider whether they need to reform. Would that everyone could follow Scrooge’s example.”

“Perfect from the first sentence to the very last.”

“The Queen, the Duchess, the Dormouse, and the Mad Hatter. Award-winning voice actor Barbara Rosenblat leads an able cast in giving proper nineteenth-century accents and voices to all our favorite iconic characters from one of the most beloved children’s classics in the English language. Energetic newcomer Georgia Lee Schultz provides Alice with an updated and nicely understandable American accent and is especially good with the many whispered asides that stitch this adapted version together. For many, Alice in Wonderland is a special cultural touchstone, even with all the commercials, videos, and pop songs that refer to it, so it is always refreshing to hear the language and intended story of the original.”

“[Narrator Georgia Lee] Schultz’s Alice was the fulcrum of the entire revival as she not only narrated the story but communicated her thoughts to listeners in asides. It was a tribute to her acting skill that she came across as a level-headed personality, someone who remained distinctly unfazed by what was happening around her. Hence her ability to treat the entire journey as a dream at the end.”

“A resplendent narration and enchanting sound effects make this edition of Grimm’s 1812 fairy tale quite irresistible. Georgia Lee Schultz’s warm voice is ideal for the portrayal of Snow White, particularly when she talks to her birds. Most impressive is Mary Ellen Herder’s Evil Queen; her harsh voice and disturbing cackle are spot-on. First-rate sound effects add atmosphere; for example, when the Evil Queen persuades Snow White to eat the poisoned apple, the crunch is as realistic as the sounds of the birds.”

“Adapted from the classic Grimm fairy tale, this audio drama of Snow White and the Seven Dwarves follows the source material well, yet adds some new elements and characters that fans of the Disney film will find interesting and compelling. A sort of secret history of what really happened…comparisons aside, this truly has feel of a fairy tale…it’s perfect for kids and adults and for those awesome parents who want to introduce their children to audio drama at an early age.”