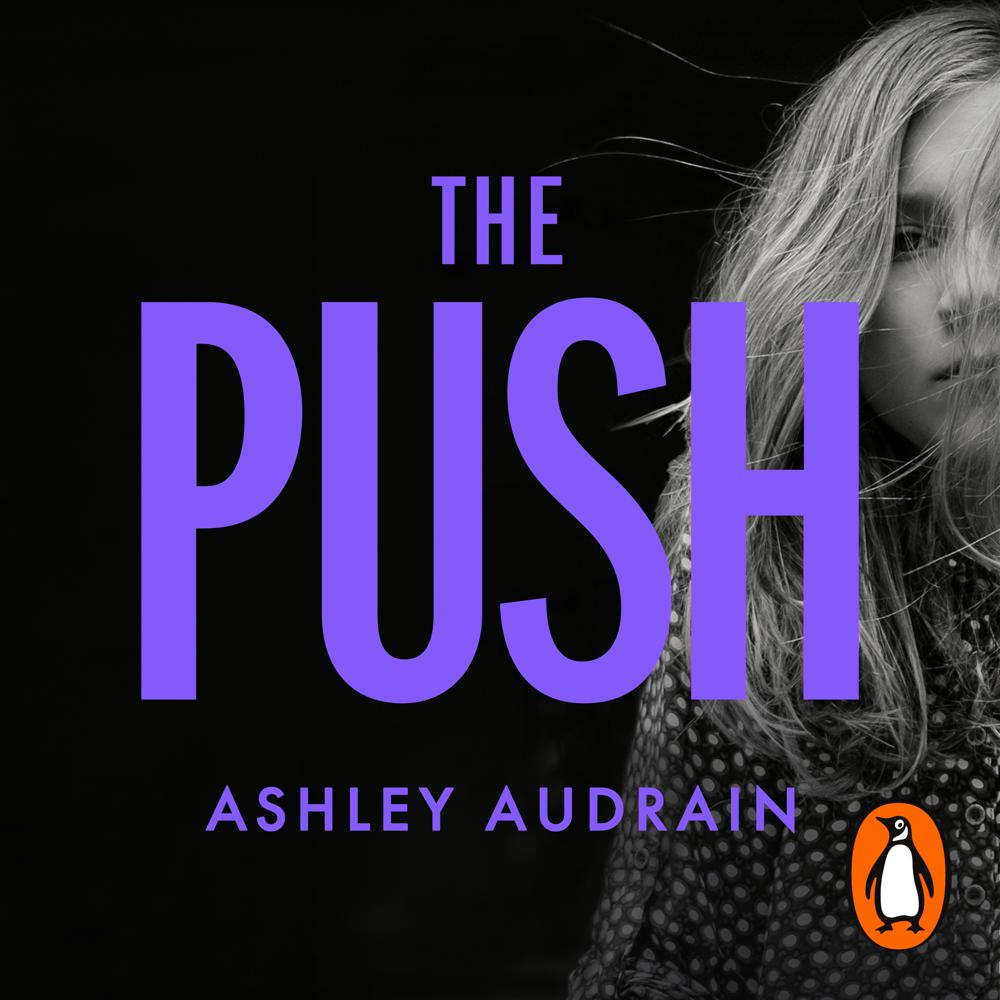 'I will never forget her eyes in that moment - I couldn't look away from them. But I knew what happened as soon as I heard it.

----
'I read it in one sitting. Not to be missed' Lisa Jewell
'Unsettling, visceral, provocative, compulsive' Sarah Vaughan
----

The arrival of baby Violet was meant to be the happiest day of my life. But as soon as I held her in my arms I knew something wasn't right. I had always known that the women in my family aren't meant to be mothers.

My husband Fox says I'm imagining it. He tells me I'm nothing like my own mother, and that Violet is the sweetest child.

But she's different with me. Something feels very wrong.

The Push is an unsettling, breathtaking and powerful read about obsession and our deepest fears that will stay with you long after you turn the final page.

The mother of all thrillers! Like The Girl on the Train - but better!

A gripping debut that explores and manipulates the fears and insecurities of mothers everywhere . . . Well thought out, vividly realised and gripping

An inventive twist on the psychological thriller formula . . . Audrain sustains the suspense expertly through assured handling of her unravelling protagonist's voice

Ashley dares us to find the relatable in the worst we can imagine . . . the knife-edge between relatability and horror keeps the reader hooked

I was gripped from the first word to the last. I've been wanting a book to take me back to how I felt when I first read We Need to Talk About Kevin. When you close the book but can't function until you know how it ends ... I really recommend this one

I was gripped . . . dazzling and gloriously complete

The Push was a poetic, propulsive read that set my nerves jangling in both horror and recognition. I read it one sitting and it stayed with me for days afterwards. Not to be missed

A compelling, compulsively readable thriller that never lets up and will keep you guessing right to the very last page

I was completely engrossed in The Push from the very first page. So tense, so all-encompassing! It's a jet-black story of motherhood, inheritance and expectations, and I loved it

This has all the hallmarks of a best seller . . . Riveting . . . An intelligent, painstaking and thought-provoking account of parenting that will move anyone

A bold exploration of motherhood, as well as a suspenseful thriller, this will have you in its grips from the very first page - and will stay with you long after you've put it down. Do not miss

I read it in two nights . . . it's giving us The Girl On The Train, it's giving us We Need to Talk About Kevin, it's going to be one of the books of the year . . . it has absolutely blown me away . . . it will spark conversation and divide people . . . I can't stop thinking and talking about it

With its riveting prose and deep convictions, Ashley Audrain's The Push had me in its clutches from the first page. Audrain's astute portrayal of motherhood was unsettling in its insights, yet highly entertaining on the page. Complex, nuanced, and unflinching, I inhaled this debut in one sitting

Audrain nimbly stokes the mystery as to whether nature or nurture is at play in Violet's increasingly hostile disposition. Executed with gripping precision

Starkly original and compulsively readable, Ashley Audrain's The Push is a deep dive into the darkest nooks and crannies of motherhood. Raw, visceral, and often disturbing, this is an intense psychological drama that will be embraced by serious book clubs and fans of Lionel Shriver's We Need to Talk About Kevin

You're drawn into this world . . . it is a difficult read but no wonder it's a cause celebre in the publishing world, trust me everyone wants this book . . . a publishing sensation

The Push is a freight train of a read - it barrels into you and propels you along, taking you places you're not sure you want to go. I found it disturbing, upsetting, and utterly compelling

Intensely absorbing, gripping until the final page, The Push excavates the myths of motherhood, deftly exploring the shape-shifting landscape of parenting, the powerful impact of the past on the present, and the deep unease of our inability to ever fully know even those we hold the closest

Suspenseful with extreme We Need To Talk About Kevin vibes, this is the Book Club Book that'll have everyone talking next year

Stayed up too late finishing [Audrain's] deeply unsettling The Push about the darkest reaches of motherhood . . . Visceral, provocative, compulsive, and with the most graphic and relatable description of childbirth I've read (or written)

I loved it - such a dark and compelling exploration of motherhood. Absolutely haunting: a brilliant, thought-provoking page-turner

The Push is written on the edge of a knife. It's a howl in the face of what we think we know - or want to believe - about motherhood. Relentlessly compelling, distressing and beautiful, Ashley Audrain's debut is the next Gone Girl, with shades of We Need to Talk About Kevin. I devoured it whole

The Push is not a book you'll be able to forget easily . . . an unputdownable story that will be the book everyone is talking about in 2021

A tense and unsettling thriller that's immersive, chilling, and provocative. A book that's best read in one sitting

Ashley Audrain's The Push is not only a propulsively entertaining, read-in-one-sitting novel, it is also a deeply provocative and fearless look at motherhood written in some of the prettiest prose you'll read all year

Written with a courage that borders on audacity, and with uncanny emotional and psychological precision, Ashley Audrain's The Push is a taut, tour-de-force literary thriller that draws you in from the very first pages and plunges you into the most harrowing of journeys: parenthood

A meteoric debut. Ashley Audrain's The Push is a force of nature, an unforgettable arrival that will linger in your heart--shimmer, darken and then haunt you. Every sentence is just so achingly alive. Audrain descends with near pointillistic precision into the gore of motherhood and love. Perhaps if Stephen King had experienced motherhood--the singular exaltation and morbid terror of that state--he might have been able to dream up this book. Wise, monstrous, and tender, The Push operates at a different frequency. It seemed to pulse in my hands. I could not put it down. I could not look away

One to watch ... The Push is told from the point of view of Blythe Connor, whose experience of motherhood is not what she hoped for

The Push is a vivid and complex spiral of questioning your grasp on reality, of uttering unspeakable thoughts, when the world tells you it's all in your head. Book blurbs often say they'll be devoured in one sitting - it's rare it proves so true

Suspenseful, dark and intriguing . . . It's going to be a big discussion point in 2021

A haunting tale about the expectations and reality of motherhood. Stunning . . . You end up staying up all night to finish The Push

Visceral, compulsive and astonishing. I could not put this down

A terrifying, psychological suspense tale of motherhood and nature versus nurture

This chilling tale barrels along towards a dark, thought-provoking ending

The tense, gripping novel - which, after a nine-way bidding war, has already been optioned for film by the producer of ugly-cry-inducing Marriage Story - will stay with you long after you finish the last page

This psychological family drama will be your next one-sit read . . . you won't want to miss it

A creepy, nuanced story that, with a growing sense of dread, subverts the ideals of motherhood so often presented as inviolable

Buckle up for a riveting read . . . will have you alternately whizzing through the pages to see what happens next, and reading slowly with widened eyes

[An] exploration of love, obsession and the dark truths of motherhood

Reminiscent of We Need to Talk About Kevin, Ashley Audrain has delivered a provocative, compulsive novel about modern motherhood

Compelling . . . A disturbing and complex tale about dysfunctional mother-daughter relationships. It's not always an easy read but it's absolutely one you won't be able to put down

The mother of all thrillers! Like The Girl on the Train - but better!

Utterly mesmerising. Ashley Audrain's powerful debut novel explores the challenges of motherhood and the terrifying isolation of being trapped within a sinister truth that no-one else believes.

One of the most anticipated novels of this year . . . fast-paced, it has the ability to distract you from anything. Exactly what we need right now

Written with an unflinching eye and a stylistically sharp, tight economy The Push is a single-sitting read, as suspenseful as any thriller, as thoughtful as any literary novel, with an almost physical force behind each of its turns and revelations. By the end, the reader will feel wrung out in the way only the best of books leaves you. Audrain's debut is a stunning, devastating novel and, frankly, one hell of a way to start a year of reading

This is a sterling addition to the burgeoning canon of bad seed suspense, from an arrestingly original new voice

This dazzling debut mixes page-turning suspense with a psychological drama

Once you start in on this story, it becomes difficult to control yourself. A twisted, tight, and exhilarating drama

This nuanced book challenges the notion of nature versus nurture, and whether a mother's love is enough. It's disturbing, painful and brilliant, holding a mirror up to society

A tense, chilling dip into the dark side of motherhood . . . The Push is uncomfortable and provocative, like a train wreck that demands your gaze

The most tense, thrilling read that will chill and enthral in equal measure

Disturbingly brilliant . . . will render you speechless

The clever and powerful psychological thriller everyone has been talking about . . . an unsettling, breathtaking and powerful read about obsession and our deepest fears that will stay with you long after you turn the final page

Audrain has the ability to mesmerise . . . heart-wrenching. A dark, pacy read

A compelling, visceral and bruising portrayal of motherhood that once read cannot ever be forgotten

A chilling and beautifully written novel that will strike dread into the heart of any new parent. The ending gave me goosebumps

A powerful debut about obsession and our deepest fears . . . will have you hooked

Exploring the dysfunctional lives of three generations of women, The Push deals with the way damage is handed down

Taut and gripping, this is a provocative look at motherhood

A gripping and vivid thriller . . . It's easy to understand why The Push has caught the attention of Hollywood film producers

Remarkably told story which I couldn't put down. Deftly drawn characters...What a book! And the last line is creepy, haunting perfection

The danger that simmers throughout is so unbearably tense! A wonderful incisive look at maternal guilt ... the effect is staggering

Fasten your seatbelt because this book is a face paced, page turning, psychological drama that will have you on the edge of your seat until the very last line

Challenges the idyllic picture of motherhood, and will change what you know about being a mother. It is tenacious and really makes you think about what it's like when women aren't taken seriously

This dark, psychological thriller offers such twists and turns that we start to doubt what we believe . . . And that sharp-intake-of-breath ending!