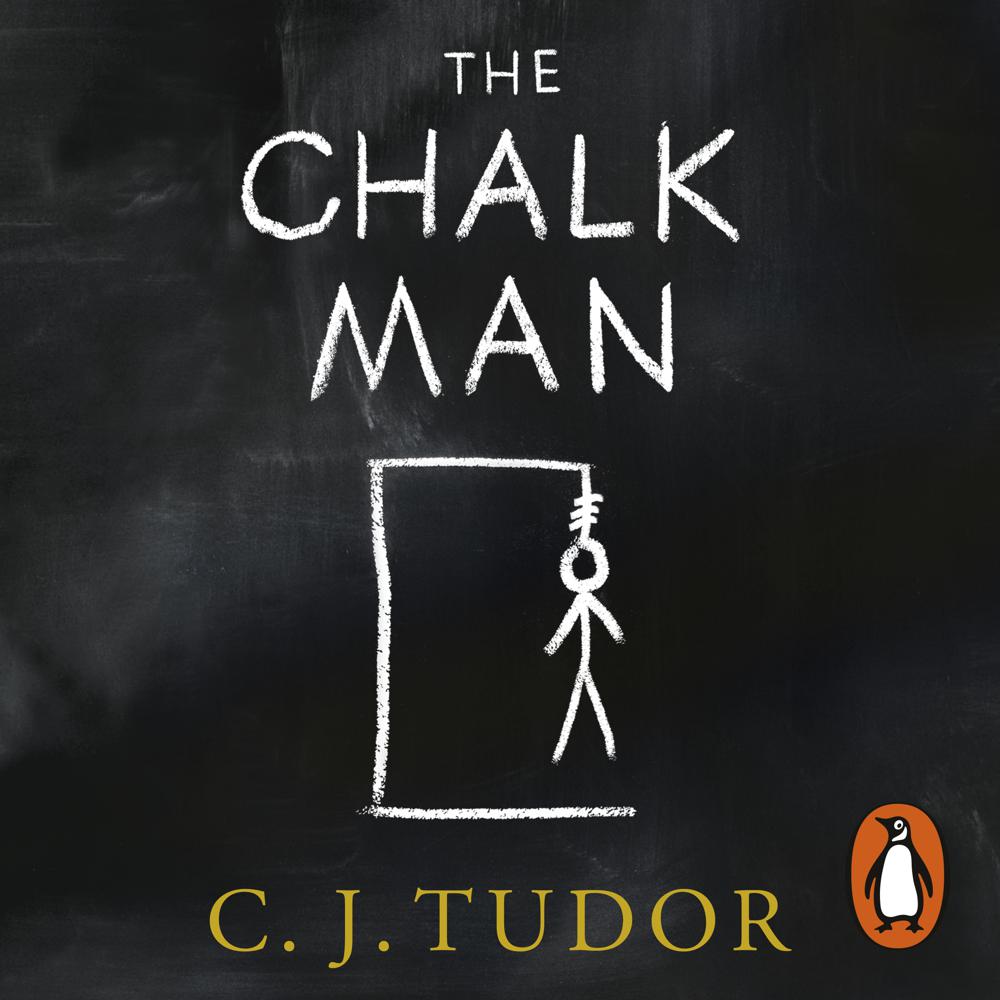 Penguin presents the audiobook edition of The Chalk Man by C. J. Tudor, read by Andrew Scott and Asa Butterfield.

None of us ever agreed on the exact beginning.

Was it when we started drawing the chalk figures, or when they started to appear on their own?

Was it the terrible accident?

Or when they found the first body?

The Chalk Man works, it's a lively and entertaining read . . . Tudor's got talent

CJ Tudor's very clever, wrong-footing debut will leave you checking that doors and windows of your holiday cottage are secure . . .

A tense gripper with a leave-the-lights-on shock ending

You'll be gripped by this cracking debut novel . . . it will keep you up all night with all the lights on. This intriguing, satisfying thriller delivers a series of shocks . . . reminiscent of the master of horror Stephen King

It's a very clever story - you'll love it!

Gripping, chilling . . . brilliant. As creepy as that house with dark windows we all knew as kids. I can't wait for the next one

Completely engrossing. Puts me in mind of Stephen King's The Body

The past rises from the chalk dust. A labyrinthine tale that kept me guessing right to the end

Half horror, half crime, The Chalk Man is a creepy, compulsive novel

Taut, twisty and very creepy, this is a must for anyone who enjoys psycho-thrillers . . . The ending is genius

Deliciously creepy with a side order of Eighties nostalgia

Started and finished in one day. Absolutely gripping, chilling, and as creepy as that house with dark windows we all knew as kids. Brilliant read and can't wait for the next one!

A well-constructed thriller layered with secrets, suspense, twists, turns and an outcome you may not see coming

It is hard to believe The Chalk Man is the debut novel from C J Tudor. The writing is sublime, and the ending is spine-tinglingly chilling

This insanely readable chiller has it all - a brilliant, nostalgic flavour, humour and heart . . . A fantastic debut from a major new talent.

Strong characterisation, plenty of plot twists and an evocative portrait of small-town life in the 1980s add up to a riveting read

The prose is punk, the pace fast and the plot sinewy. There are shades of Stephen King when the reality bends into the sinister, and a deliciously creepy finale . . .

The novel is so well executed . . . Tudor is very good at deploying shocks and surprises that catch you off guard. I jumped so many times while reading I could have been sitting on a chair made of cactus

Thriller of the Week - an intriguing puzzle with an engaging cast of characters . . . a highly promising debut

A must-read for all horror fans

There are enough twists and turns in this dark debut thriller to tie you in knots. The end is fabulously surprising and satisfying . . . creepy

Book of the Month

Scare yourself silly with this brilliant chiller . . . a spine-tingling read

One of the best suspense thrillers i've read. A very easy 5 big fat stars and 100% recommended

A fantastic debut novel to keep you up late at night

It's a corker that'll give you the willies. Chalk one up to C J Tudor.

Genuinely creepy books don't come along very often, but this one can hold its missing head up high

There are shades of Stephen King in this very creepy timeslip, as well as an evocative portrait of small-town life in 1980s Britain

My favourite crime book of 2018 would have to be The Chalk Man. It initially brought to mind twisted tales of suburban Americana such as Stand by Me and Carrie. However, by weaving in authentic and evocative period detail C. J. Tudor manages to create a story that tells of the darkness at the heart of small-town life that is, like the rotten pastoral in a M. R. James ghost story, uniquely English. Unsettling, taut and skillfully plotted, The Chalk Man grabbed me by the throat from the very first sentence and didn't let go until the final, heart-stopping page

[I] haven't had a sleepless night due to a book for a long time. The Chalk Man changed that. Many congrats C. J. Tudor

What a great book. A twisty thriller and downright creepy ending. 5 stars.

Absolutely brilliant. I was expecting a creepy horror story that I'd have to read with all the lights on but this book is so much more than that - it's witty, insightful, clever, thoughtful, mysterious, gripping, nostalgic and utterly compelling. Publishers often talk about "an exciting new voice in fiction" and I genuinely think C. J. Tudor is going to be huge. This book has bestseller written all over it and if it doesn't go to number one I will eat my crime writing hat

What an amazing debut! Such an ingenious, original idea. I was engrossed from the very first page. I loved how the 1986 and present day storylines weaved so skilfully together to create that unforgettable and unexpected ending. Compelling, taut and so very, very chilling. This book will haunt you!

It's been a while since I've read such an impressive debut. The pace was perfectly judged, the characters superbly drawn and there's a creeping sense of unease that starts with the prologue and grows throughout the book. And then that ending! It feels so fresh and deserves to be a huge success

Utterly Hypnotic. The Chalk Man is a dream novel, a book of nightmares: haunted and haunting, shot through with shadow and light - a story to quicken the pulse and freeze the blood. A dark star is born

Impossible to put down, cleverly constructed and executed

Kept me up until five in the morning. Wonderfully written. I loved it!

I absolutely loved The Chalk Man . . . It's a dark, mesmerising thriller with an ending that left me with goosebumps!

One of the best books I've read since I first read Stephen King's IT when I was 14. Go get it!

I've just finished The Chalk Man by C. J. Tudor. WOW! I could not put it down. If you like Stephen King, you'll LOVE this!

At the heart of this accomplished debut lies a shocking crime stumbled upon by a group of teenage friends. It is a discovery that shatters their innocence and haunts the whole community. Now, twenty years later, someone is sending anonymous letters - chalk drawings of a stick figure with a noose around its neck - someone who hasn't forgotten what happened in the woods all those years ago. The past is very much alive in this book where memory is unreliable and old secrets fester, threatening to turn as odorous as a rotting corpse. Tudor's sharp eye for detail and ear for dialogue lend the childhood scenes an immediacy and authenticity that completely convince. With its driving plot and sensitive evocation of friendship and loneliness, The Chalk Man is an utterly gripping read, with an ending that will make the hairs on the back of your neck bristle

Just finished The Chalk Man. Dark and addictive. This page-turner is more twisty than a rollercoaster. And one hell of a ride.

The Chalk Man is a stunning debut, a riveting thriller about the powerful grip of the past and the unbreakable bonds of childhood friendship. The ending of this smasher will completely throw you for a loop

Absolutely loved it! Creepy, brilliant and tense, I could not put it down!

Blasted through this beauty in one intense and thrilling sitting

The Chalk Man stole my weekend! Wow. Just wow. The tension just builds and builds. And what a final page . . .

Finished reading The Chalk Man by C.J Tudor last night. What a book! Enjoyed every minute of it. A total banger!

C.J. Tudor brilliantly weaves past and present into a haunting, vividly imagined tale. Much more than a murder mystery, it is a sharp, terrifying exploration of the bonds and limitations of childhood friendships and of secrets that refuse to remain buried. I fell in love with the guiding voice of this novel, the thoughtful and solitary Eddie. Prepare to be surprised again and again, even until the final page

The Chalk Man is an unpredictable and engaging thriller: sinister, tragic, and with a beautifully rendered sense of time and place. That final page still haunts me

The grip the past has on the present reveals itself in ever more sinister and macabre ways in this utterly original and relentlessly compelling psychological thriller. The Chalk Man kept me guessing all the way to the end