Us Against You
Fredrik Backman 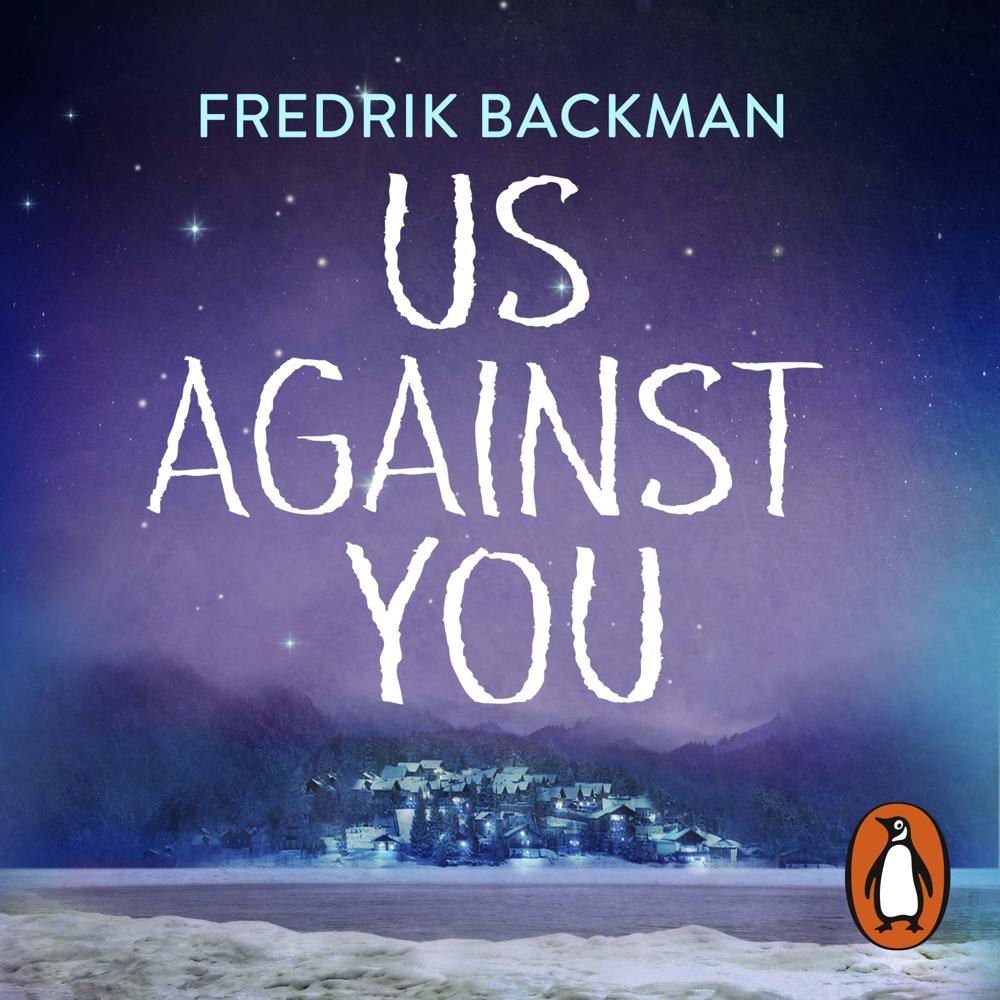 Penguin presents the audiobook edition of Us Against You by Fredik Backman, read by John Sackville.

A small, broken town sits on the edge of a frozen lake surrounded by a forest, its wounds still raw from a tragedy that tore its fragile community in two.

Beartown has lost its way. Now the cold and dark that surround the snowbound town creep in, and so do new conflicts and tensions. What was once a friendly rivalry with the neighbouring town is beginning to turn sinister and Beartown braces itself for another tragic blow.

How far will the people of Beartown go to preserve their reputations for a second, deadly time?

Us Against You is a spell-binding exposition of small-town life in all its flawed complexity.

Praise for Beartown and Fredrik Backman

I utterly believed in the residents of Beartown, and felt ripped apart by the events in the book

Surrounded by impenetrable forests, it recreates the stifling atmosphere of a dying community. This is a mature, compassionate novel

Backman can tickle the funny bone and tug on the heart strings when he needs to, and is a clever enough storyteller to not overindulge in either

As popular Swedish exports go, Backman is up there with ABBA and Stieg Larsson.

A kind of problem play that moves extremely skilfully near the melodramatic without derailing. Its originality is substantial and the book credibly conveys the dual faces of everyday life. An impressive novel, like no other

Praise for Us Against You

A story about families, about friendship and loyalty, inequality, female vulnerability, male back-slapping, and parenthood ... No person's story is too little to be told, Backman includes them all. A novel with a big heart

Backman is the Dickens of our age, and though you'll cry, your heart is safe in his hands

Backman is a masterful writer, his characters familiar yet distinct, flawed yet heroic. . . There are scenes that bring tears, scenes of gut-wrenching despair, and moments of sly humor. . .Like Friday Night Lights, this is about more than youth sports; it's part coming-of-age novel, part study of moral failure, and finally a chronicle of groupthink in which an unlikely hero steps forward to save more than one person from self-destruction. A thoroughly empathetic examination of the fragile human spirit, Backman's latest will resonate a long time.

A light hearted, deeply moving novel about a grumpy but loveable curmudgeon who finds his solitary world

Backman's ability to tell stories in pictures is one of his strongest merits, not least how he describes relationships . . . It's rare that one cares about so many characters in a book, and seldom that one comes so close to a whole community. But the leading role in Backman's novels about Beartown is, after all, played by the sports community. It's a love declaration of the highest order

Mr. Backman cements his standing as a writer of astonishing depth and proves that he also has very broad range plus the remarkable ability to make you understand the feelings of each of a dozen different characters. . . . The story is fully packed with wise insights into the human experience causing characters and readers to ponder life's great question of who we are, what we hope to be and how we should lead our lives

Fredrik Backman writes wonderfully about men, with a love and understanding for the ones who would rather solve conflicts with their fists. It's hard not to love it

A brilliant sequel . . . Backman writes about loyalty and love, but also captures the feelings of athletes in a vibrant way

Backman knows how to construct a thrilling plot, and what he writes engages . . . And when he hits his stride among the emotions, the sentimental turns into an asset - like a hockey puck straight to the heart

It's obvious that Fredrik Backman loves sports and no one is as good at evoking feelings as he is. You are thrown between laughter and tears in the space of one sentence to the next. At the same time, this might be his most earnest and serious, if you can understand what I mean, novel to date. It takes an even bigger grip on the world than the previous novel in the series did. Now we can only wait for the next chapter

What you get in a Fredrik Backman work is wonderful writing and
brilliant insights into things that truly matter - right vs. wrong, fear vs.
courage, love vs. hate, the importance and limits of friendship and
loyalty, and more. Fredrik Backman is one of the world's best and most
interesting novelists. He is a giant among the world's great novelists -and this literary giant is still growing.

In his dark but warmhearted way, Backman is a psychologist, and his
insights are on display again in Us Against You...he creates an astute
emotional world much bigger than a small Swedish town. It's a novel youcan sink into.

If Alexander McCall Smith's and Maeve Binchy's novels had a love
child, the result would be the work of Swedish writer Fredrik Backman /
.../ Backman's novels have wide appeal, and for good reason. Us Against
You takes a lyrical look at how a community heals, how families recoverand how individuals grow.

Backman (A Man Called Ove) returns to the hockey-obsessed village of
his previous novel Beartown to chronicle the passion, violence,
resilience, and humanity of the people who live there in this engrossing
tale of small-town Swedish life /.../ Backman's excellent novel has an
atmosphere of both Scandinavian folktale and Greek tragedy. Darkness
and grit exist alongside tenderness and levity, creating a blunt realismthat brings the setting's small-town atmosphere to vivid life.

There is even more potential for book group discussion here as
Backman explores violence, political maneuvering, communities,
feminism, sexuality, criminality, the role of sports in society, and whatmakes us all tick.

Readers, take a break from the heat this summer to visit the icy streets
of Beartown. Immerse yourself in Us Against You, for once you open this
book, you won't be able to resist falling into the hockey town out in the
woods. Live among the residents for a few days. I guarantee that it will
be tough to say goodbye when you turn the last page. Fredrik Backman
has a rare talent for reaching inside his readers and coaxing out their
deepest emotions while weaving a riveting tale that stays with you for along time. Don't miss out on this phenomenal novel.

Through Backman's astute examination of humanity, Us Against You will elicit snickers and full-blown belly laughs. It will rip out hearts, then
replace them stronger than before. Most of all, it is sure to prompt
readers to examine their lives in order to be better people, if only inmicroscopic ways.

Dark and gritty, but peppered with moments of breath-catching hope.

The sequel to Beartown is finally here, and it does not disappoint.

This is a tale of the pitfalls of group mentality as well as the loss of an
innocence we all take for granted - and it will grip you from start to finish.

Just as the cult TV hit Friday Night Lights wasn't just about high-school
football, this sequel to Beartown is about more than small-town hockey.
Us Against You is a story of hopes, dreams, loyalty, friendship, and - after
someone is left for dead - the lengths people will go to for the love of the game.

We have a rare book for you. [Us Against You] is not only about hockeyand sports. It's about everything that makes a man a man.

Backman uses an abundance of thrilling hints about upcoming events,
and it works. You simply have to continue reading. The story is
wonderful, deeply touching and very thought-provoking, and hats off
again to the author's ability to portray people and trends in society. The
novel plays on your entire register of emotions, and you live and breathe
alongside the many different characters, all of which are precisely and empathetically depicted.

A beautiful and brutal drama.

"Fredrik Backman is one of Sweden's best authors. He's mastered how
to depict a village and its citizens so that you both love and hate them.
/.../ Backman writes with emotion, and it goes straight to your heart. /.../
As always with Backman, there's still hope for humanity, because wherethere is violence and hatred, there is also forgiveness and love."

Us Against You is an excellent novel that's easy to read and skillfully
handles great themes. /.../ The world created by Backman lives andbreathes and the characters are both human and complex.

Backman keeps you hooked from the first to the last page. For allBeartown fans, Us Against You feels like coming home.

Fredrik Backman writes wonderfully about men, with a love and
understanding for the ones who would rather solve conflicts with theirfists. It's hard not to love it.

Backman knows how to construct a thrilling plot, and what he writes
engages. /.../ And when he hits his stride among the emotions, the
sentimental turns into an asset - like a hockey puck straight to the heart.