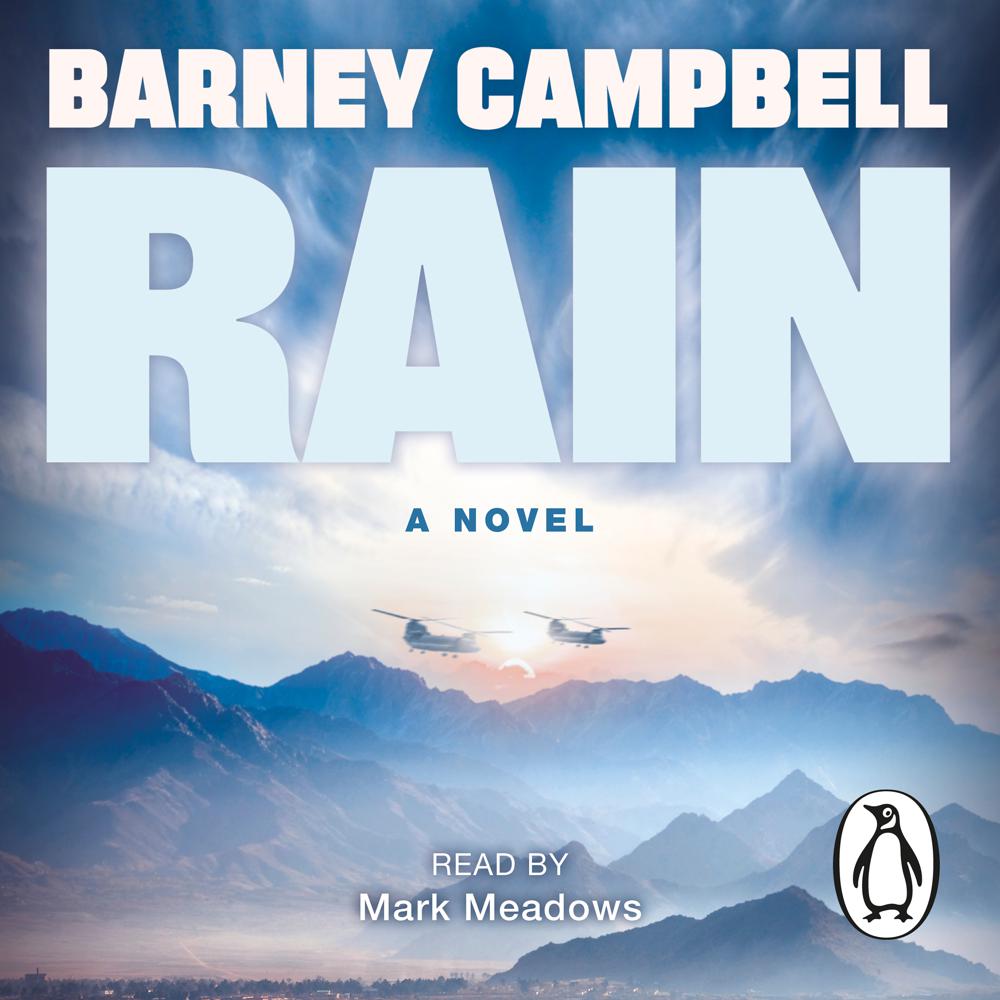 ONE OF THE EVENING STANDARD'S BOOKS OF THE YEAR 2015
Barney Campbell's Rain is a searingly powerful début that reads like a British Matterhorn
********
Penguin presents the unabridged, downloadable, audiobook edition of Rain by Barney Campbell, read by Mark Meadows.

'Corporal Thomas (my acting sergeant since Adams died) and I have to go down the line of the boys as they're checking their kit before we go out. Some of them are crying, not bawling just weeping gently but still steadfast; others are just pumped to the max, bouncing their heads up and town like they're listening to trance music, just amped about getting the rounds down. Those are the ones I'm most worried about; how they're going to cope with being back home is beyond me.

The other day Thommo and I had to drag one boy, Croxley, out of the gate and kick him down the road for 10 metres as he sobbed and wailed just to get him going. But when the contact started he was immaculate, calm as you like. And they're so young as well. For some of them this is their first time abroad. I've promised them that abroad's not usually this bad ...'

Drawing on the author's own experience, Rain is the most powerful, vivid and affecting portrait of the Afghan frontline to have yet emerged - a novel of war that will take its place among the classics from previous generations.

One of the best novels about the Afghanistan war. Brutally honest, it could have been a memoir. Read Rain

Thrilling, gut-wrenching and profoundly moving, this book, like all the very best novels of war, has the utterly compelling grip of authenticity

Simply superb. It could become the defining account of British soldiers in Afghanistan

A wonderfully achieved, enthralling and moving novel of war. Its authenticity is as telling as it is terrifying

No better on-the-ground description of Britain's war in Afghanistan will ever be written. Rain is what Chickenhawk or, more recently, Matterhorn was to Vietnam. It's unputdownable, except for when the reader needs to draw breath or battle a lump in the throat

One of the most powerful and emotional works ever written about British soldiers in battle. Troubling, funny, upsetting, exhilarating and deeply moving. You will never forget it

A raw novel about the war in Afghanistan . . . the book smells completely authentic

Gripping . . . the ending is genuinely shocking

This is without doubt the best and most readable account of a modern combat soldier's life that I have read. The unique relationship between officer and soldier is brilliantly explored, as is the impact of war on loved ones left behind. Then there's the raw fear, the shock of the real thing, the loss of comrades and the sense of absolute mutual commitment that carries the day. I cannot commend it too much. A modern classic

Rain is not merely good, it's remarkable. Powerful, at times unbearably harrowing, it captures both the fear and exhilaration of men pushed to breaking point

Riveting. The evocation of life in a warzone is captivatingly real . . . As well as the extraordinary detail there's a heartrending emotional depth . . . The result is eye opening and harrowing. A really powerful debut