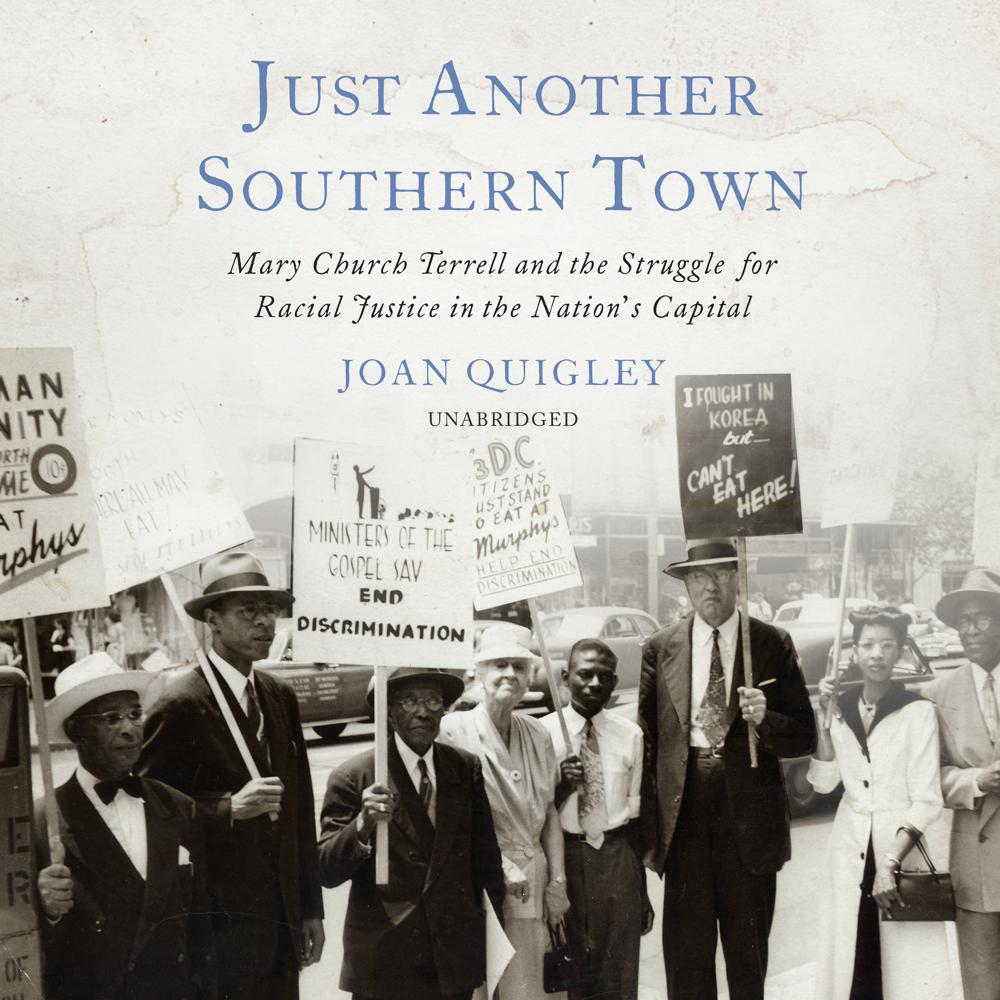 In January of 1950, Mary Church Terrell, an eighty-six-year-old charter member of the NAACP, headed into Thompson’s Restaurant, just a few blocks from the White House, and requested to be served. She and her companions were informed by the manager that they could not eat in his establishment, because they were “colored.” Terrell, a former suffragette and one of the country’s first college-educated African-American women, took the matter to court. Three years later, the Supreme Court vindicated her outrage: District of Columbia v. John R. Thompson Co., Inc. was decided in June 1953, invalidating the segregation of restaurants and cafes in the nation’s capital.

In Just Another Southern Town, Joan Quigley recounts an untold chapter of the civil rights movement: an epic battle to topple segregation in Washington, the symbolic home of American democracy. At the book’s heart is the formidable Mary Church Terrell and the test case she mounts seeking to enforce Reconstruction-era laws prohibiting segregation in DC restaurants. Through the prism of Terrell’s story, Quigley reassesses Washington’s relationship to civil rights history, bringing to life a pivotal fight for equality that erupted five years before Rosa Parks refused to move to the back of a Montgomery bus and a decade before the student sit-in movement rocked segregated lunch counters across the South.

At a time when most civil rights scholarship begins with Brown v. Board of Education, Just Another Southern Town unearths the story of the nation’s capital as an early flashpoint on race. A rich portrait of American politics and society in the mid-20th century, it interweaves Terrell’s narrative with the courtroom drama of the case and the varied personalities of the justices who ultimately voted unanimously to prohibit segregated restaurants. This work restores Mary Church Terrell and the case that launched a crusade to their rightful place in the pantheon of civil rights history.

“Joan Quigley’s Just Another Southern Town isn’t ‘just another’ biography. In gripping detail, it traces the inspiring story of Mary Church Terrell, whose crusade for civil rights in the nation’s capital took her all the way to the Supreme Court in a life that spanned Lincoln’s Emancipation Proclamation and the landmark school desegregation case, Brown v. Board of Education. Just Another Southern Town is a powerful reminder of the difference anyone, especially an elderly black woman, can make in the life of a people and its laws.”

“During most of Mary Church Terrell’s ninety-one years, Washington D.C. was indeed just another Southern town where she could not eat in restaurants that catered to whites or sit wherever she chose in movie theaters. This incisive biography of Terrell and her victorious quest for dignity and equality of treatment fills an important place in the history of the civil rights movement.”

“The headline ‘Eat Anywhere’ seems so simple. But without the determination and diligence of people like Mary Church Terrell, it would be only a wistful dream for African Americans in this country. Joan Quigley illuminates the story of Terrell with exquisite research, rich context and heartfelt care.”

“By focusing on an unjustly neglected case and a highly intelligent protagonist who knew all the key actors and left a detailed diary, Joan Quigley makes the early years of the modern civil rights movement come alive. She has a rare gift for making us care about the hopes, frailties, and disappointments of specific individuals by setting them in an illuminating, sure-handed account of large political forces and legal ideas.”

“The story of Mary Church Terrell is as inspiring as it is vital in understanding the demise of legal segregation. Joan Quigley has done a remarkable job chronicling Terrell’s impassioned fight for equal rights in the years before Brown v. Board of Education, and Just Another Southern Town is an important addition to civil rights literature.”

“Quigley’s narrative of Terrell and her court case is especially relevant in the wake of numerous well-publicized killings of black citizens by police officers and the latest wave of black activism.”

“Just Another Southern Town is a powerful reminder of the difference anyone, especially an elderly black woman, can make in the life of a people and its laws.”