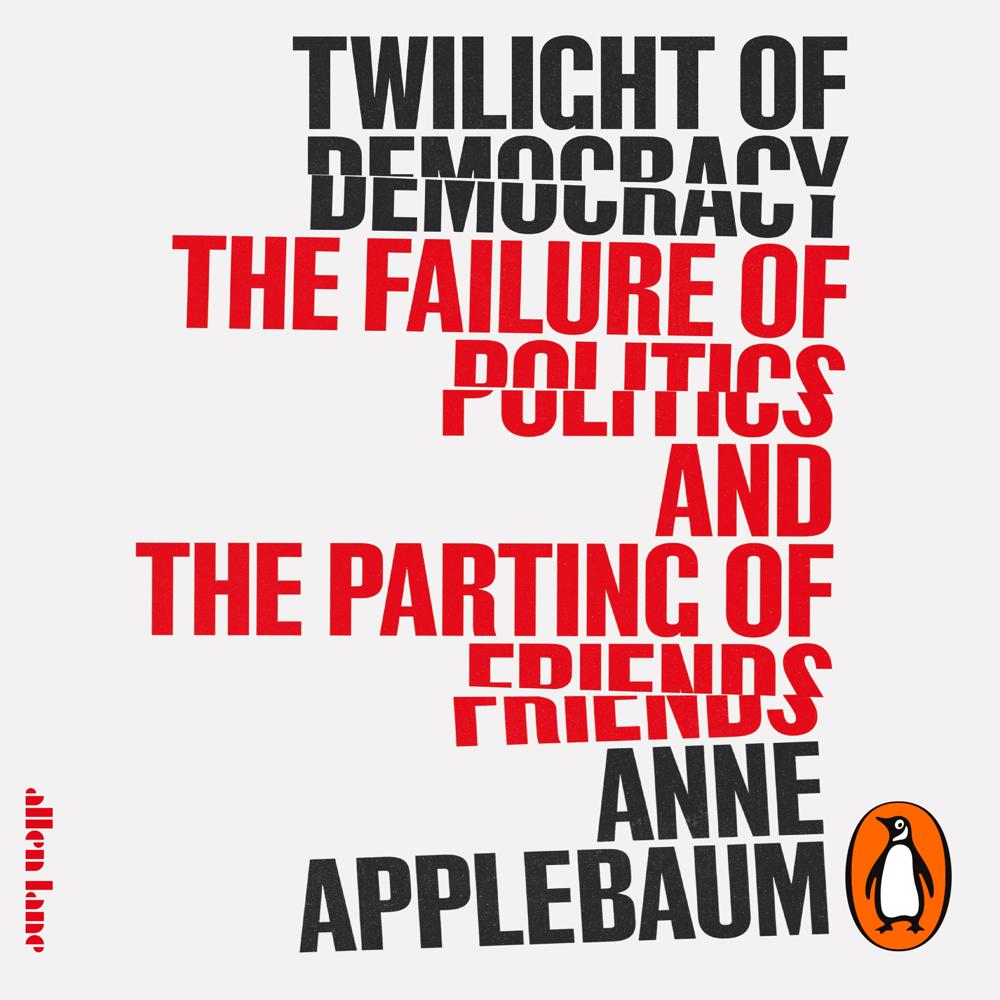 In the years just before and after the fall of the Berlin Wall, conservative politicians and intellectuals across Europe and America celebrated a great achievement, felt a common purpose and, very often, forged personal friendships. The euphoria quickly evaporated, the common purpose and centre ground gradually disappeared and eventually - as this book compellingly relates - the relationships soured too.

Anne Applebaum traces a familiar history in an unfamiliar way, looking at the trajectories of individuals caught up in the public events of the last three decades. When politics become polarized, which side do you back? If you are a journalist, an intellectual, a civic leader, how do you deal with the re-emergence of authoritarian or nationalist ideas in your country? When your leaders appropriate history, or pedal conspiracies, or eviscerate the media and the judiciary, do you go along with it?

Twilight of Democracy is a new kind of political writing, an essay that mixes the personal and the political and brings a fresh understanding to the dynamics of public life in Europe and America, both now and in the past.

Anne Applebaum's Twilight of Democracy is the most important non-fiction book of the year because it asks the most urgent question: why is the right wing in the West moving so far to the right? Why is it, at this point in history, so drawn to authoritarianism? Why has it given up on democracy?'

this engrossing account ... is a political book; it is also intensely personal, and the more powerful for it.

Applebaum, long an authority on the abuses of Communist and post-Communist Eastern Europe, in her new book Twilight of Democracy is unsparing in exposing the moral bankruptcy of Trumpian Republicanism. Her sharp pen is as persuasive as any in presenting the idea of the "west" as a morally serious project-and one whose loss we may come to mourn.

Equal parts memoir, reportage, and history, this sobering account of the roots and forms of today's authoritarianism, by one of its most accomplished observers, is meant as a warning to everyone. ... critically important for its muscular, oppositionist attack on the new right from within conservative ranks-and for the well-documented warning it embodies. The author's views are especially welcome because she is a deliberate thinker and astute observer rather than just the latest pundit or politico. In the spirit of Julien Benda, Hannah Arendt, and Theodor Adorno, Applebaum seeks to understand what makes the new right "more Bolshevik than Burkean."... A knowledgeable, rational, necessarily dark take on dark realities.

written with deep insight, experience and wisdom. Definitely a very important book for understanding our troubled times and the fragility of our democracies

readable, eloquent and passionate ... Applebaum knows what the enemy looks like from the inside, and how it thinks. This book may only be a start. We should cherish her. I think she has a lot more she can tell us.

Applebaum's reflections on the anti-democratic pandemic sweeping our world offer an extraordinary mix of personal witness and dispassionate historical analysis.... It's unlikely that anyone will ever give us more sensitive or revealing insights on this question

A brilliant writer who sheds light on the most disturbing political phenomenon of our era: the rise of rightwing authoritarianism around the world... a cry of alarm and a call to arms.... We have been warned.

This richly informed book enlarges her account of the enormous peril in which the democracy we took so casually for granted now stands.

This is an illuminating political memoir about the break-up of the political tribe that won the Cold War.

Heretics make the best writers. ... Applebaum can bring a candle into the darkness of the populist right ... her writing is an arsenal that stores the sharpest weapons to hand.

Advancing her arguments with eloquence and personal testimony, Applebaum passionately decries the corrosion of liberal, open-society values in the last three decades.

From Brexit Britain and Donald Trump's America to the cynical politics of Poland and Hungary, she feels beset by a new chauvinist right that has no regard for rules, truth or institutions. Ms Applebaum evokes an acute sense of betrayal as people she trusted turn against her, quicker than she thought possible. Her personal story is a parable of what can happen to alliances in the absence of a common adversary, and when the hardships such enemies inflicted fade from memory.

Applebaum's progress ...has yielded an enviable supply of raw material for her narrative. She mines her sources doggedly....Twilight of Democracy is a rather penetrating work of ethnography