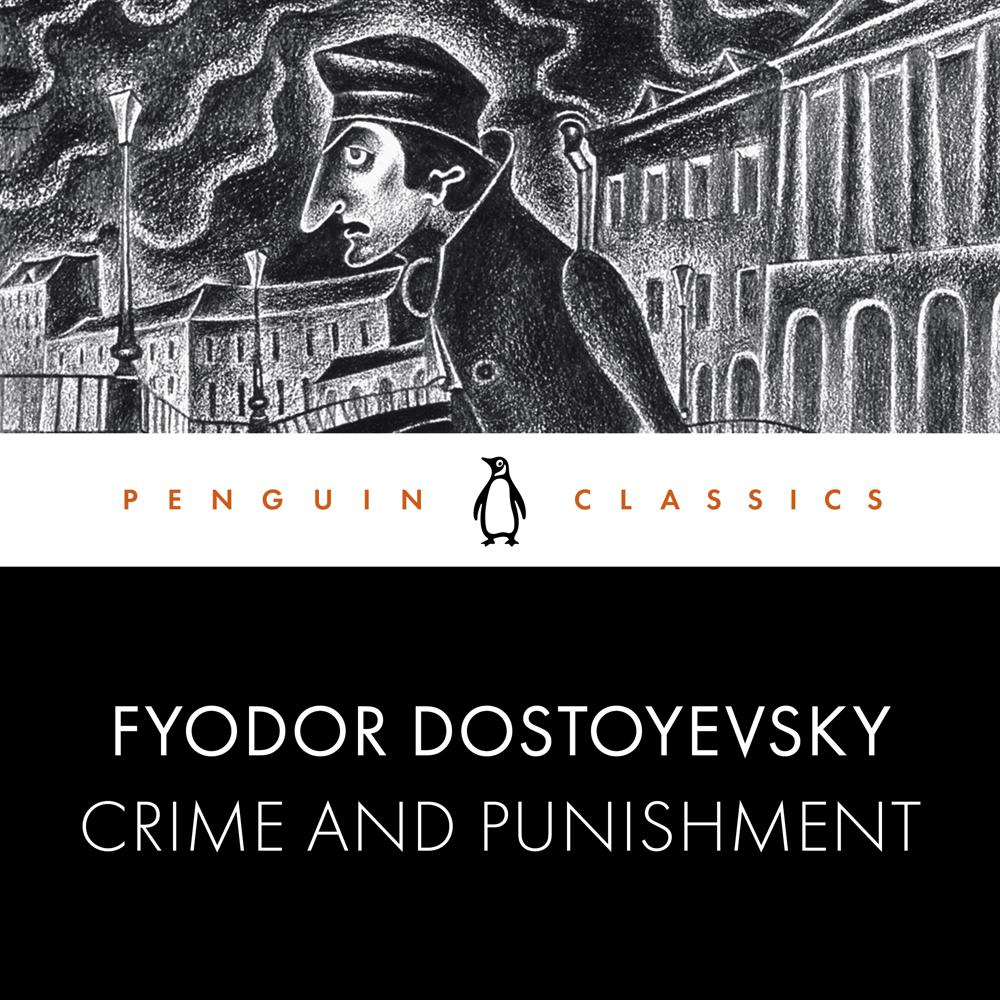 This Penguin Classic is performed by Don Warrington, known for his roles in Death in Paradise and The Five as well as his multiple Shakespearean performances. This definitive recording includes an Introduction by Oliver Ready.

'A truly great translation . . . This English version really is better' - A. N. Wilson, The Spectator

This acclaimed new translation of Dostoyevsky's 'psychological record of a crime' gives his dark masterpiece of murder and pursuit a renewed vitality, expressing its jagged, staccato urgency and fevered atmosphere as never before. Raskolnikov, a destitute and desperate former student, wanders alone through the slums of St. Petersburg, deliriously imagining himself above society's laws. But when he commits a random murder, only suffering ensues. Embarking on a dangerous game of cat and mouse with a suspicious police investigator, Raskolnikov finds the noose of his own guilt tightening around his neck. Only Sonya, a downtrodden prostitute, can offer the chance of redemption.

Fyodor Dostoevsky (1821-1881) was born in Moscow and made his name in 1846 with the novella Poor Folk. He spent several years in prison in Siberia as a result of his political activities, an experience which formed the basis of The House of the Dead. In later life, he fell in love with a much younger woman and developed a ruinous passion for roulette. His subsequent great novels include Notes from Underground, Crime and Punishment, The Idiot, Demons and The Brothers Karamazov.

Oliver Ready is Research Fellow in Russian Society and Culture at St Antony's College, Oxford. He is general editor of the anthology, The Ties of Blood: Russian Literature from the 21st Century (2008), and Consultant Editor for Russia, Central and Eastern Europe at the Times Literary Supplement.

Ready's translation is nothing less than a wonder. He mirrors the tonal shifts in Dostoyevsky's original more nimbly than any English-language translator has before, and he catches the dark humour that runs through the book mostly below its surface, and best of all, he captures the essential, unchanging absurdity of Raskolnikov perfectly ... Ready's version crackles with grubby, demented vitality

What a pleasure it is to see Oliver Ready's new translation bring renewed power to one of the world's greatest works of fiction ... Ready's work is of substantial and superb quality ... [His] version portrays more viscerally and vividly the contradictory nature of Raskolnikov's consciousness. ... Ready evokes the crux of Crime and Punishment with more power than the previous translators have ... with an enviably raw economy of prose

This vivid, stylish and rich rendition by Oliver Ready compels the attention of the reader in a way that none of the others I've read comes close to matching. Using a clear and forceful mid-20th-century idiom, Ready gives us an entirely new kind of access to Dostoyevsky's singular, self-reflexive and at times unnervingly comic text. This is the Russian writer's story of moral revolt, guilt and possible regeneration turned into a new work of art ... [It] will give a jolt to the nervous system to anyone interested in the enigmatic Russian author

I was bowled over, by the novel itself and the utterly brilliant translation, which grabs you by the lapels and doesn't let go. In the course of my work, I go through mountains of nonfiction to try to understand the world. This summer, I was reminded of the power of a novel to uncover something much deeper about the human spirit

A dazzlingly agile and robust new translation . . . Ready, who has a practiced ear for Russian dialect and a natural grace with English, is exceptionally deft at navigating [the novel's] challenges ... His ability to reproduce the whole heady brew of Dostoyevsky's novel in a consistent but nimble modern English ought to be applauded

What a great book this is and nothing like the dated, heavy Russian literature I thought I might have to wade through. It's a page turner - a dark, comic thriller with an anti-hero akin to Macbeth and characters so perfectly rendered as to leap from the page. The style is really modern and constantly delves into the mad thoughts of the protagonist - if you can call him that - Raskolnikov. Try it, especially Oliver Ready's high-tempo version

Ready's vivid, new version ... is more than a Titanic idea of a great translation. It is the real thing ... Crisp and compelling, building on staccato rhythmic structures to heighten the novel's dramatic tension, then elegantly sidling into Dostoyevsky's abrupt denouement, his translation brings new life to a 150-year-old classic, rendering the familiar in fresh light

Ready's new translation of Crime and Punishment is thoughtful and elegant [and] shows us once again why this novel is one of the most intriguing psychological studies ever written. His translation also manages to revive the disturbing humour of the original ... In some places, Ready's version echoes Pevear and Volokhonsky's prize-winning Nineties version, but he often renders Dostoyevsky's text more lucidly while retaining its deliberately uncomfortable feel. . . . Ready's colloquial, economical use of language gives the text a new power

Ready's lively translation succeeds in admirably capturing the psychological intensity of Dostoyevsky's style. . . . [It] replicates natural speech patterns in a way that Pevear and Volokhonsky's rather stilted translation does not. . . . [Ready's] English prose is rhythmic and, at times, poetic. . . . It is [the novel's] sense of frenzy that Ready so brilliantly captures in his new translation, which will ensure that another generation of readers remains enraptured by Crime and Punishment

Oliver Ready's translation of Crime and Punishment . . . is a five-star hit, which will make you see the original with new eyes

I was delighted to discover Oliver Ready's new translation of Crime and Punishment ... It is brimful of a young man's rage and energy and bullshit. I adored it

A gorgeous translation ... Inside one finds an excellent apparatus: a chronology, a terrific contextualizing introduction, a handy compendium of suggestions for further reading, and cogent notes on the translation. . . . But the best part is Ready's supple translation of the novel itself. Ready manages to cleave as closely as any prior translator to both spirit and letter, while rendering them into an English that is a relief to read

A clever modern translation of this classic of Russian horror that gave me nightmares as a student. We journey through suffering, repentance and expiation of sin

A truly great translation ... Sometimes new translations of old favourites are surplus to our requirements. Sometimes, though, a new translation really makes us see a favourite masterpiece afresh. And this English version of Crime and Punishment really is better ... Crime and Punishment, as well as being an horrific story and a compelling drama, is also extremely funny. Ready brings out this quality well ... That knife-edge between sentimentality and farce has been so skilfully and delicately captured here ... Ready's version is colloquial, compellingly modern and - in so far as my amateurish knowledge of the language goes - much closer to the Russian. ... The central scene in the book is a masterpiece of translation

A tour de force built from prose that is not only impeccable in its own right but also perfectly suited to the story, its characters, its epoch and themes. We should treasure this new translation and, indeed, this new book