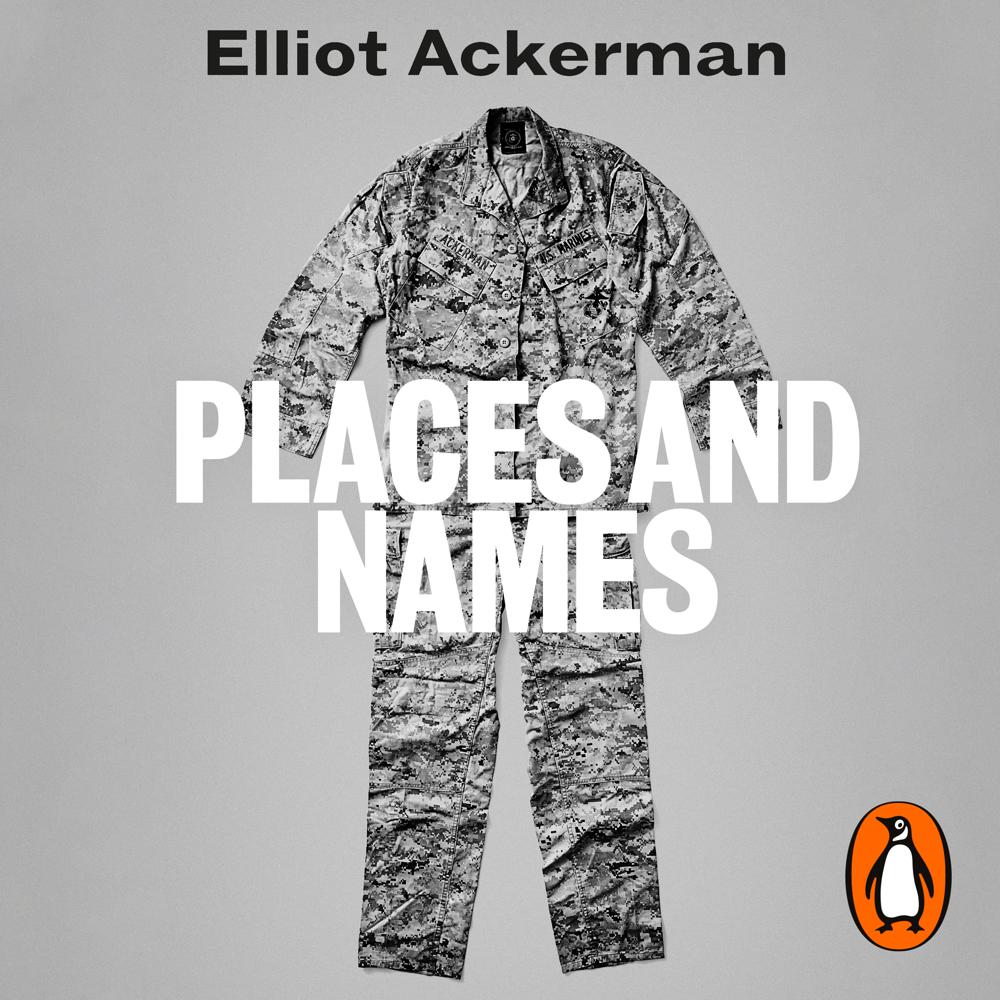 Penguin presents the audiobook edition of Places and Names: On War, Revolution and Returning by Elliot Ackerman.

In a refugee camp in southern Turkey, Elliot Ackerman sits across the table from Abu Hassar, who fought for Al Qaeda in Iraq and has murky connections to the Islamic State. At first, Ackerman pretends to have been a journalist during the Iraq War, but after he establishes a rapport with Abu Hassar, he reveals that in fact he was a Marine. The two men then compare their fighting experiences in the Middle East, discovering they had shadowed each other for some time: a realisation that brings them to a strange kind of intimacy.

Elliot Ackerman's extraordinary memoir explores the events that led him to come to this refugee camp and what, unable to forget his time in battle, he hoped to find there. Moving between his recent time on the ground as a journalist in Syria and his Marine deployments in Iraq and Afghanistan, he creates a work of astonishing atmospheric pressure, one which blends the American experience with the perspectives and stories of the Arab world, and draws a line between them.

At once an intensely personal book about the terrible lure of combat and a brilliant meditation on the meaning of the past two decades of strife for the region and the world, Places and Names bids to take its place among our greatest books about modern war.

Elliot Ackerman fought the Long War, and now, with Places and Names, he gives us a searingly honest record of his ongoing effort to make sense of the war. This is, literally, a book of wanderings; Ackerman's sojourns to conflict zones, old battlefields, and muddy refugee camps recall the wanderings of that earlier soldier, Odysseus, as he struggles to come home from war, and, no less than his predecessor, Ackerman finds himself journeying through the shadow world of ghosts and spirits that go by the name of memory. Vivid, profound, restless, and relentlessly probing, Places and Names is destined to become a classic of the Long War.

It is a rare writer who is not afraid to deal with the toughest conflicts, ask the hardest questions, show the darkest side of even heroes, and still manage to renew our faith in humanity.

How often does one encounter a novel as perfectly shaped, as fresh, as subtle and as explosive as this? I couldn't turn away from Elliot Ackerman's latest taut wonder, and when I got to the final page, I wanted to start all over again, in the light of the haunting last words. Patiently, and unflinchingly, Ackerman is becoming one of the great poet laureates of America's tragic adventurism across the globe.

Elliot Ackerman was a young Marine Corps officer during the battle of Fallujah in 2004. I was an embedded journalist with his unit, which lost 20 men in the first week of fighting. I remember him as clever, direct and sometimes playfully ironic, all qualities on display in his book about what he has seen of war, Places and Names. His account of how he won a Silver Star is gripping, the chaotic reality on the ground contrasting with the po-faced and supremely uninformative official citation. His descriptions of Syria, which he visited as a writer, were so painfully evocative for me that I had to stop reading for a time. His vivid, sparse prose bears comparison to that of Tim O'Brien in The Things They Carried or Norman Lewis in Naples '44; Places and Names has the same clear-eyed view of what war is.

Ackerman brings a fiction writer's touch to his reportage. The soldier-scribe is a familiar figure in British narratives of the region, from TE Lawrence to Rory Stewart. Ackerman fits easily into this tradition ... The book shows what it is like to be in the middle of it all - particularly for a young, open-minded and quietly idealistic American.

Elliot Ackerman has done something brave as a writer and even braver as a soldier: He has touched, for real, the culture and soul of his enemy

When I finished Elliot Ackerman's Places and Names my copy was covered with bracketed paragraphs and underlined phrases. There is no surer indicator of a book filled with insight and good writing. Ackerman's honest searching to come to terms with his war experience helped me better understand my own. This book is a gift that should be shared with every American who helped pay for people like Ackerman to fight their wars for them.

Rare is the writer who can illuminate either the experience of the individual or the larger context of the times in which we live. Elliot Ackerman manages to do both. He is as adept at describing the strange cocktail of emotions that accompany the moments preceding combat as he is unraveling the Gordian Knot of contemporary geopolitics. That he does so in the graceful, lucid prose fans of his fiction have come to admire is even more remarkable. Places and Names is an extraordinarily beautiful and insightful work of memoir and journalism by a writer who deserves to be read widely.

What a great, honest book-the kind that makes one feel lucky to have in one's hands. Ackerman has served his country twice: first as an infantryman in our nations wars, and then as a guide-wise beyond his years-who helps us understand what we've done. His prose is easy and comfortable like an old jacket. His understanding of war is so profound that one feels like secrets have been revealed-truths-information that one day may be necessary for our survival. Well done.

Elliot Ackerman's exceptional memoir is really a double memoir of his own experiences as a Marine and those of a Jihadist fighter he befriends in a refugee camp. The result is a superb, unique and unforgettable story of war and death, fear and cruelty, above all the horrors and allure of combat.

Places and Names is a brilliant and gripping account of the aftermath of failed wars and revolutions, and of the still burning idealism that smolders in the wreckage. Elliot Ackerman brings a novelist's skill with language, a reporter's eye for detail, and his life experience as a highly decorated Marine veteran of five deployments to bear in this unique and powerful meditation on violence, heroism, and the fracturing of the Middle East."

Green on Blue is harrowing, brutal, and utterly absorbing. With spare prose, Ackerman has spun a morally complex tale of revenge, loyalty, and brotherly love ... a disturbing glimpse into one of the world's most troubled regions.

Beautiful writing about combat and humanity and what it means to 'win' a war.

Elliot Ackerman's voice scares me. It's a bit too close for comfort. He sees too much and he knows too much, and that makes him a great guide to today's post-everything Middle East. Read him at your own risk - but ignore this book at your own peril.

This novel as a whole attests to Mr. Ackerman's breadth of understanding - an understanding not just of the seasonal rhythms of war in Afghanistan and the harsh, unforgiving beauty of that land, not just of the hardships of being a soldier there, but a bone-deep understanding of the toll that a seemingly endless war has taken on ordinary Afghans who have known no other reality for decades.

In Places and Names, Elliot Ackerman, a soldier turned writer, seeks out his former foes and confronts his own memories on battlefields where the killing continues. The result is one of the most profound books I have ever read about the real nature of war and the abstract allure of the ideas and the bloodshed that fuels it.

Places and Names is its own profile in courage: the story of how a Marine turned reporter struggled with the polemics of desolation in the Middle East. Elliot Ackerman is a man of both action and thought, and his book is closely observed, rigorously lived, and clarifying for all of us who have not understood how U.S. policy in the Islamic world went so terribly wrong.