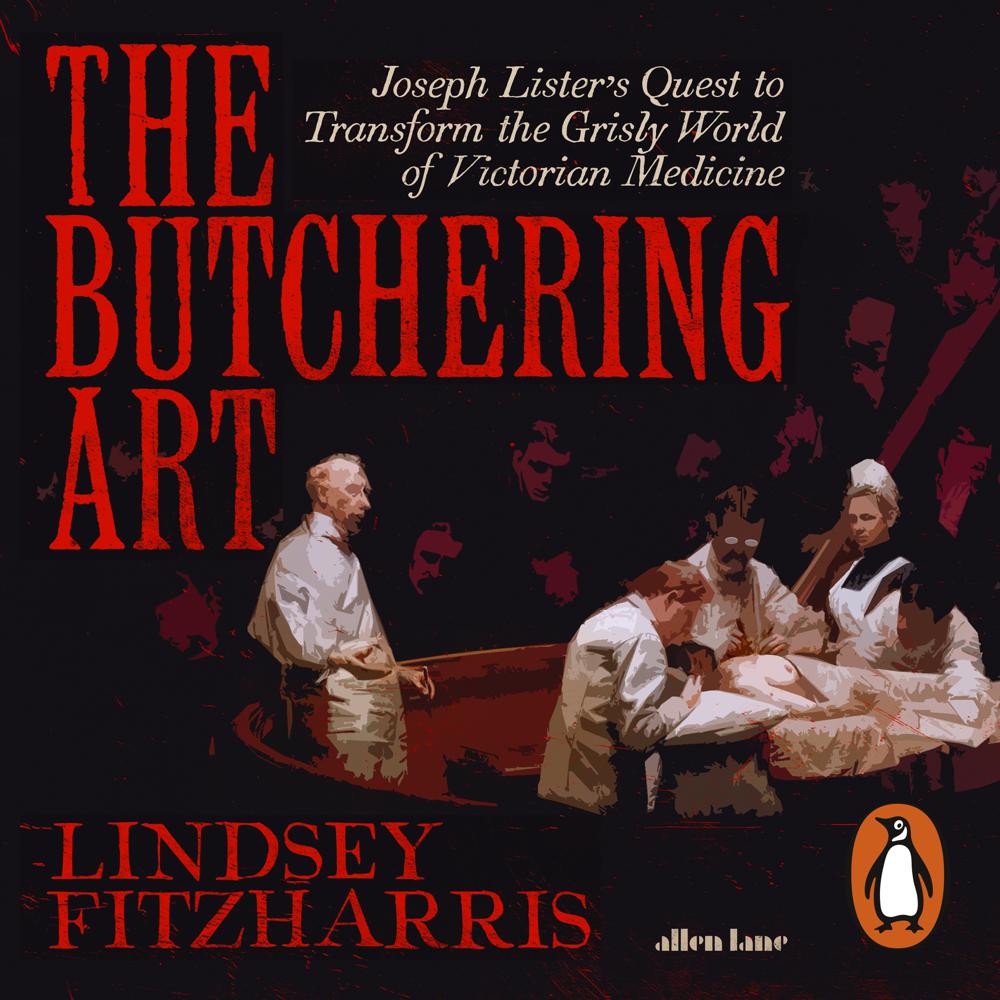 Penguin presents the audiobook edition of The Butchering Art by Lindsey Fitzharris, read by Sam Woolf.

In The Butchering Art, historian Lindsey Fitzharris recreates a critical turning point in the history of medicine, when Joseph Lister transformed surgery from a brutal, harrowing practice to the safe, vaunted profession we know today.

Victorian operating theatres were known as 'gateways of death', Fitzharris reminds us, since half of those who underwent surgery didn't survive the experience. This was an era when a broken leg could lead to amputation, and surgeons were still known to ransack cemeteries to find cadavers. And in squalid, overcrowded hospitals, doctors remained baffled by the persistent infections that kept mortality rates stubbornly high.

At a time when surgery couldn't have been more dangerous, an unlikely figure stepped forward: Joseph Lister, a young Quaker surgeon. By making the audacious claim that germs were the source of all infection - and could be treated with antiseptics - he changed the history of medicine forever. With a novelist's eye for detail, Fitzharris brilliantly conjures up the grisly world of Victorian surgery, revealing how one of Britain's greatest medical minds finally brought centuries of savagery, sawing and gangrene to an end.

Gloriously pulsating ... [Fitzharris] has an eye for morbid detail, visceral imagery and comic potential. From out of this hellish vision, Lister emerges as the cool, modern, scientific saviour to whom we should all give thanks

A lively read, constantly entertaining ... Fitzharris is an unapologetic showman. I imagine her as a ringmaster, inviting us to roll up and read if we dare

Fitzharris slices into medical history with this excellent biography of Joseph Lister, the 19th-century "hero of surgery." ... She infuses her thoughtful and finely crafted examination of this revolution with the same sense of wonder and compassion Lister himself brought to his patients, colleagues, and students

Well researched and written with verve... A fine read full of vivid detail, prompting thoughtful reflection on the past, and the challenging future, of surgical practice

Fascinating and shocking ... [Fitzharris] offers an important reminder that, while many regard science as the key to progress, it can only help in so far as people are willing to open their minds to embrace change

The Butchering Art is a formidable achievement - a rousing take told with brio, featuring a real-life hero worthy of the ages and jolts of Victorian horror to rival the most lurid moments of Wilkie Collins

Brilliant ... Thanks to Lister's dogged pursuit of knowledge and fervent attention to the needs of surgical patients, death rates plummeted. Fitzharris tells this story with an equal attention to detail

Atmospheric ... The Butchering Art has its share of resplendent gore

Book of the Week

Engaging and extensively researched ... A riveting and sympathetic description of one man's quest to help humanity

Thoroughly enjoyable ... With The Butchering Art, Fitzharris explores the intersection of Lister's life, the development of antiseptic surgery, and the horrors of the wards with an almost surgical precision

The Butchering Art is medical history at its most visceral and vivid. It will make you forever grateful to Joseph Lister, the man who saved us from the horror of pre-antiseptic surgery, and to Lindsey Fitzharris, who brings to life the harrowing and deadly sights, smells, and sounds of a nineteenth-century hospital

With an eye for historical detail and an ear for vivid prose, Lindsey Fitzharris tells a spectacular story about one of the most important moments in the history of medicine-the rise of sterile surgery. The Butchering Art is a spectacular book-deliciously gruesome and utterly gripping. You will race through it, wincing as you go, but never wanting to stop

A brilliant and gripping account of the almost unimaginable horrors of surgery and post-operative infection before Lister transformed it all with his invention of antisepsis. It is the story of one of the truly great men of medicine and of the triumph of humane scientific method and dogged persistence over dogmatic ignorance

Hugely entertaining and informative ... Fitzharris brings [Joseph Lister's] sensibility to life with great energy and elegance, and her account is vivid and entertaining, as well as enjoyably (and sometimes eye-wateringly) graphic. The result is rich with anecdote and intellectual excitement, replete with emotional resonance and narrative pleasure

Electric. The drama of Lister's mission to shape modern medicine is as exciting as any novel

Scintillating and shocking ... A book full of gangrene, pus and hideous pain, which will make you thankful never to suffer the horror of having a tumour removed from your jaw with no pain relief

In The Butchering Art, Lindsey Fitzharris becomes our Dante, leading us through the macabre hell of nineteenth-century surgery to tell the story of Joseph Lister, the man who solved one of medicine's most daunting - and lethal - puzzles. With gusto, Dr. Fitzharris takes us into the operating 'theaters' of yore, as Lister awakens to the true nature of the killer that turned so many surgeries into little more than slow-moving executions. Warning: She spares no detail!