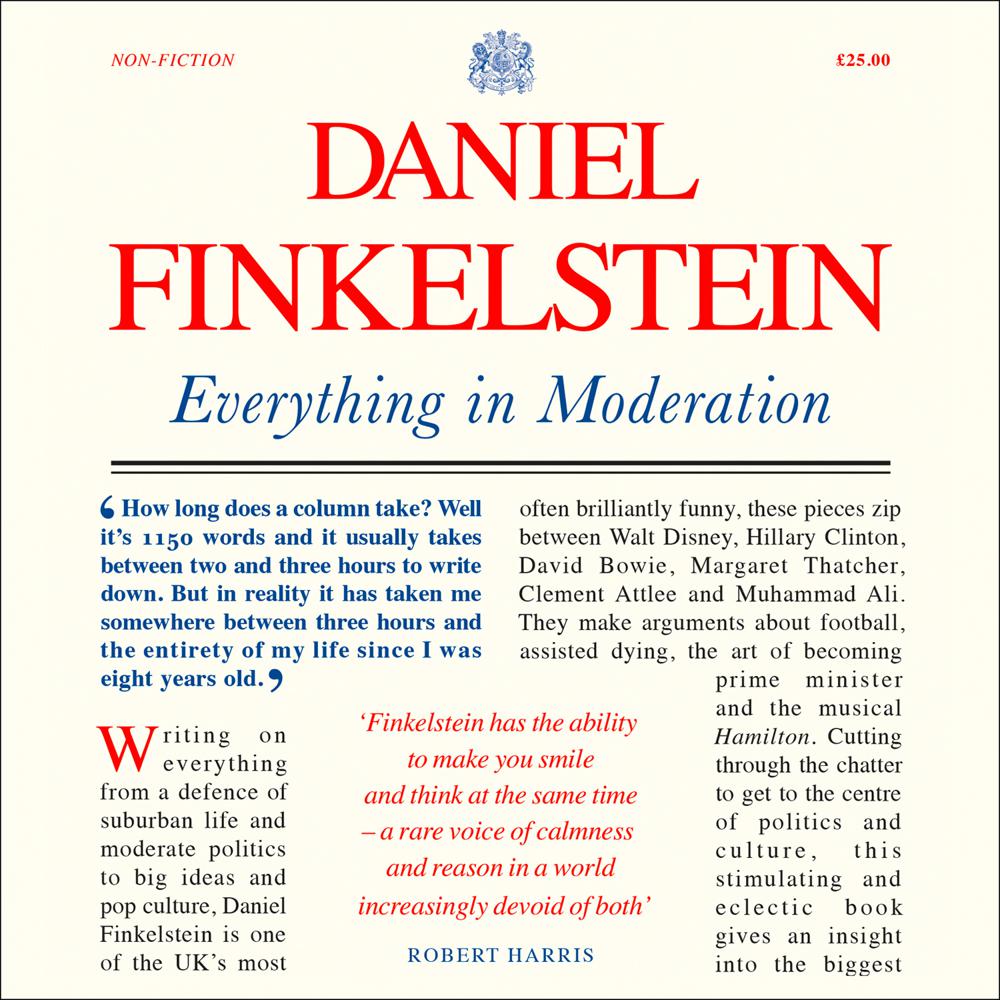 'I've never met Danny Finkelstein but I think I'm in love with him. His book is such good company – sane, intelligent and witty. He deals with serious subjects in an immensely readable way … If I'm asked to nominate my book of the year, this will be it'
Wendy Cope

Writing on everything from a defence of suburban life and moderate politics to big ideas and pop culture, Daniel Finkelstein is one of the UK’s most entertaining and widely read columnists.

This collection brings together Finkelstein’s greatest writings from The Times, ranging from the personal – with his articles on growing up Jewish in Hendon Central and on the deaths of both of his parents – to the political, with columns on how to predict elections, the way political science showed us Ed Miliband was on his way to defeat, and why the base rate of coups meant Jeremy Corbyn wouldn’t be ousted before an election.

Wry, informed and often brilliantly funny, these pieces zip between Walt Disney, Hilary Clinton, David Bowie, Margaret Thatcher, Clement Attlee and Muhammed Ali. They make arguments about football, assisted dying, the art of becoming Prime Minister and the musical Hamilton. Cutting through the chatter to get to the centre of politics and culture, this varied and stimulating book gives an eclectic insight into the biggest conversations of the modern day. Everything is here. In moderation of course.

‘This is Danny Fink at his very Danny Fink finest: elucidating, wise and intensely curious – always searching to explain the political from the places few other writers dare to go – be it a Finnish ringroad or a Coca-Cola focus group … In this collection of columns, Danny reminds us of a singularly profound truth – that all politics comes back to the messy rub of humanity – the small personal triumphs and the unforgotten indignities. It is his deep understanding of human nature that makes this book funny, warm and percipient. A joy.’
Emily Maitlis

‘Through the clarity of his words and the depth of his insight, Daniel Finkelstein has been a voice of moderation and reason amidst the anger and uncertainty in British public life. His wisdom has now been captured in this collection which should be required reading for all who seek a better and more hopeful future’
Jonathan Sacks