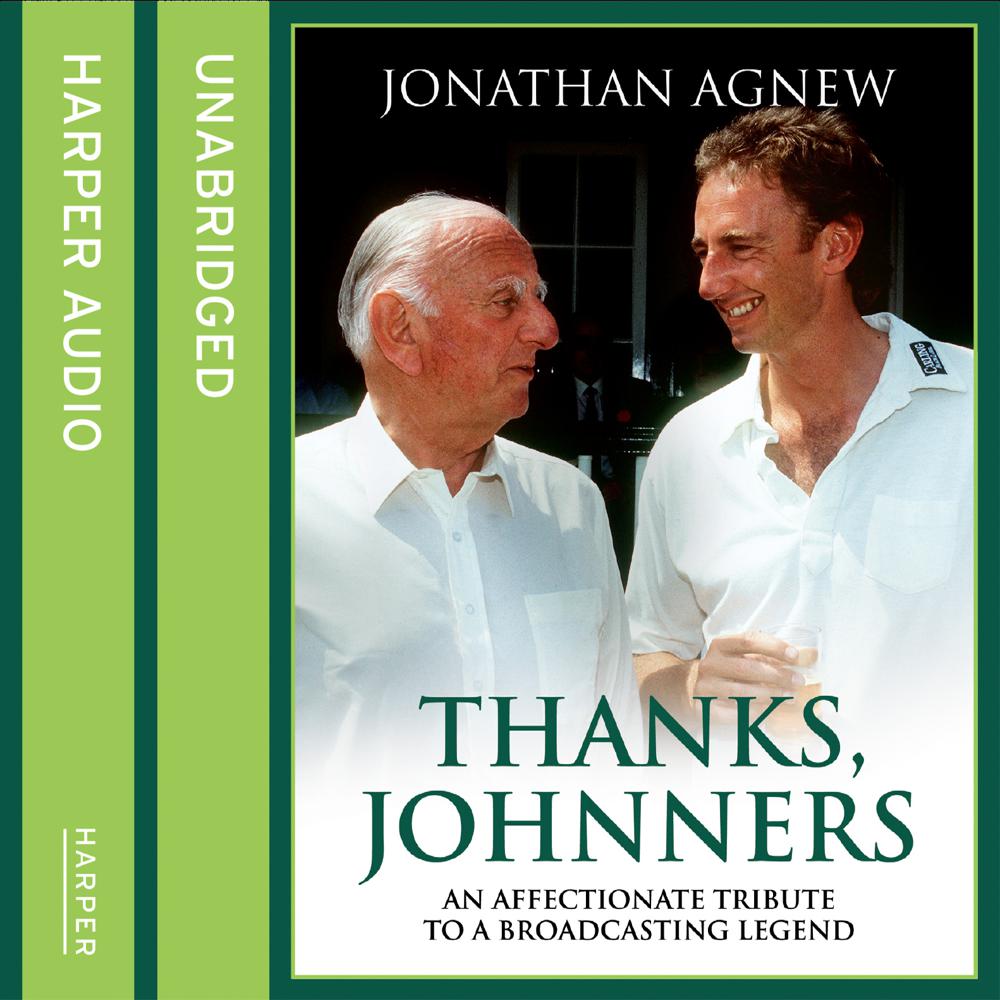 READ BY JONATHAN AGNEW AND FOREWORD READ BY THE MAGNIFICIENT STEPHEN FRY WITH SURPRISE CONTRIBUTIONS FROM JONATHAN’S TEST MATCH SPECIAL COLLEAGUES!! Perfect for cricket fans everywhere, Thanks Johnners is a warm and witty tribute to Brian Johnston and his time at the helm of Test Match Special.

READ BY JONATHAN AGNEW, FOREWORD BY STEPHEN FRY AND SPECIAL GUEST APPEARANCES FROM TEST MATCH SPECIAL COLLEAGUES. The Test Match Special on-air incident, in which Jonathan Agnew's comment on Ian Botham's attempt to avoid stepping on his stumps – "He just couldn't quite get his leg over" provoking prolonged fits of giggles, most notably from Brian Johnston, has been voted the greatest piece of sporting commentary ever. The friendship between "Aggers" and "Johnners" became immortalised through that broadcasting classic, but there was a far deeper bond between the two men, as this fascinating book reveals.

Jonathan Agnew had grown up to the sound of Johnston, Arlott, and a young Martin-Jenkins et al on TMS as he followed his father around on the family farm, ear glued to the transistor radio, but the two men met formally only when Agnew joined the BBC team at Headingley in 1991.

Thus began a great working partnership which, fuelled by a mutual passion for the noble game, bridged the generation gap and ended only with Johnston's sudden death in 1994. As this book demonstrates so convincingly, Johnners's wit, warmth and sense of fun was a feature not only of his cricket commentaries, but also in the way he lived his life. His influence on "Aggers" is clearly recognisable in the same amiable and informal manner in which his successor presents Test Match Special today.

Thanks, Johnners is a rich blend of biography and anecdote, of antics and dramas on and off the pitch, in and out of the commentary box, its pages filled with stories about the great names of cricket including Fred Trueman, Geoffrey Boycott, Vivian Richards, Michael Holding and Ian Botham. Just as TMS is the sound of summer, so Thanks, Johnners is the fresh breeze rippling the long grass of remembered pleasures.

‘A splendid book…Like TMS it is funny, fluid and conversational.’ THE SUNDAY TELEGRAPH

‘So good that I felt as if the radio had been surreptitiously switched on and I was, in fact, listening to Test Match Special…it is the easiest and most enjoyable of reads.’
THE DAILY TELEGRAPH